I try to explain what I see when I unplug capacitor from below circuit, and put it back inversely. So after the capacitor has been flipped voltmeter shows +6V and slowly dischares to 1,5V and stops there. It may seems to be normal at first but when I strat to think what happened I cannot understand it. Let's go back to the beginning, it is what the circuit below depicts. Capacitor is charged to 3V thru 10Mohms of voltmetter, so it has equal amaount of charge on each plate but with diffrenet signs. So one plate has X columbs of positive charge and other X columbs of negative charge. Now after we unplug capacitor and put it back inversly we have a situaltion in which negatively charged plate is now connected to positive terminal of battery and positive one to negative terminal of battery. So what happens? As I said, multimeter shows 6V and slowly discharges to 1.5V. First why 6V? If the negative cap plate is connected to positive battery terminal it should dissolve all negative cherges it has previously and gain these positive ones making this closer to the other plate charge therefore lowering the voltage. Why it isn't the case? Why then it stops discharging at 1.5V? 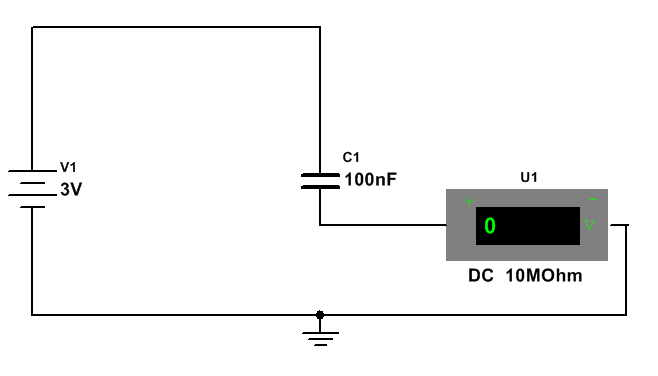 You can consider the capacitor as a (very tiny) rechargeable battery.

In your circuit, the capacitor will charge to 3 volts through the resistance of the voltmeter. When you reverse the capacitor connections, you effectively have two, three volt batteries in series, so the voltmeter will initially read 6 Volts.

The capacitor will then discharge, then re-charge with the opposite polarity. I would expect the meter to eventually read Zero volts, but there may be some leakage in the capacitor, or some other effect, that causes the meter to settle at 1.5 volts.

Once the capacitor is charged, it's a 3V source with a polarity opposite the battery, so the net voltage is 0. If you flip it around, it's another 3V source in series with the battery and with the same polarity, so they add to 6V.

That said, why it only discharges to 1.5V is more of a mystery. Is the cap polarized? An electrolytic/tantalum might leak in the reverse direction, but one doesn't often encounter these types in the sub-uF range.

Not the answer you're looking for? Browse other questions tagged capacitor circuit-analysis analog or ask your own question.