Here is my basic understanding of common mode range for diff input amplifiers:

As far as I understand the common mode voltage is nothing but the offset at which the diff signal is travelling above a common reference.

It seems like chokes and filters are frequency dependent and they attenuate CM voltages if the CM voltages are alternating/varying in time.

But can there be an interference or noise source which causes increase in CM voltage as DC? In other words is there a phenomenon called DC common mode interference in practice? If so, what are the ways to eliminate it?

In other words is there a phenomenon called DC common mode interference in practice?

Yes and it's numerically embodied for any decent op-amp under the heading CMRR (common-mode rejection ratio). A good op-amp will usually have a graph indicating something like this: - 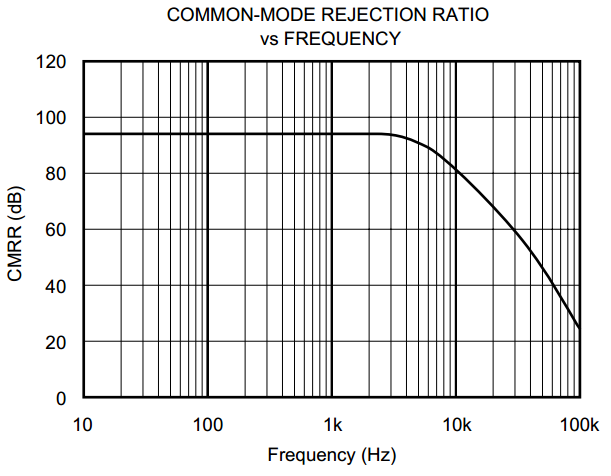 And that good op-amp will have a number quoted like this (made-up example): -

In addition there will be a clause to that number that says something like: -

In other words if you raised or lowered the common voltage by 10 volts the CMRR would remain better than 95 dB. Clearly this gets worse at higher frequencies due to the inability to control parasites and the falling open-loop gain.

For a differentail amplifier made from 4 resistors and an op-amp it will be a lot worse because the resistor tolerances will cause offsets.

can there be an interference or noise source which causes increase in CM voltage as DC?

Anything that transmits data and uses phantom powering of a remote device is liable to this problem.

Not the answer you're looking for? Browse other questions tagged common-mode or ask your own question.