Electric field and potential plots across a pn junction diode

Below shows how the charge density, electric field and potential is varying along the horizontal axis of a pn junction diode under equilibrium: 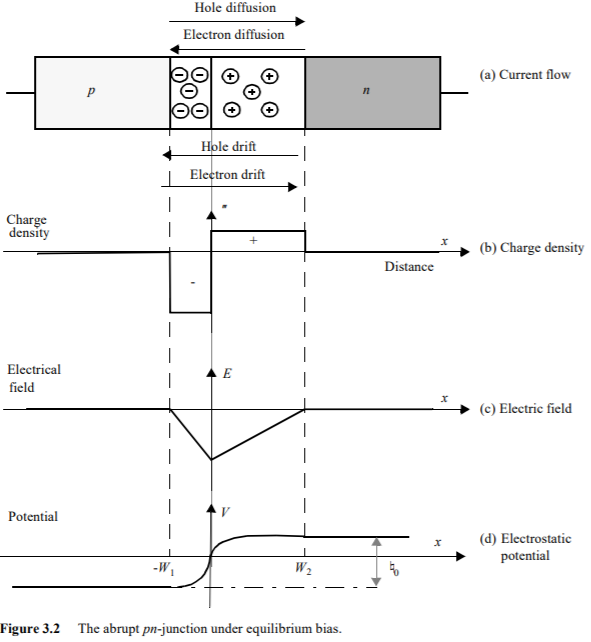 How are rest of the plots i.e electrical field and potential plots are derived/obtained from this charge density plot? Some mathematical or physical interpretation would help.

Calculating the electric field from the charge density can be done using the first Maxwell equation:

Where \$\rho\$ is the charge density, and \$\epsilon\$ is the permittivity of the material. In a single dimension, this equation is simply:

The potential is defined as:

So the integral of a constant charge density results in a linear electric field dependency.

Integrating the linear electric field, results in a quadratic potential.

The charge density is an equilibrium between diffusion (=thermal motion) and electricl attraction of charged particles.Its derivation is actually quite complex differental equation problem which needs statistical electron physics and field theory.

The curve for electric field is a brute force one dimensional solution of the basic electricity fact that the vector divergence of the field density in a given point is = charge density.in that point.

The potential curve is a calculation how much work is needed to move an unit charge through the given uneven electric field - it's got directly from the definition of the potential.

This all needs about half year math and physics studies in lowest university level.

About measuring the potential:

If you have a diode, there's a potential difference (=voltage) between the terminals. In theory it could be detected if you had a sensitive enough contactless measuring method. Unfortunately as soon as you insert a normal voltmeter, the voltage vanishes - there's nothing that could produce continuous current that a normal voltmeter needs.

Not the answer you're looking for? Browse other questions tagged pn-junction or ask your own question.

1
Depletion Region of a FET
2
Diode PN Junction Understanding
41
Why isn't there a potential difference across a disconnected diode?
4
Understanding the PN-Junction Built in Voltage
1
PN junction diode's free electrons
0
Why the current across a diode is zero when the forward bias voltage is less than barrier potential?
1
current of forward-biased pn junction
0
Diode PN Junction depletion region under bias
14
Perpetual machine from a PN-junction diode
1
Nature of conventional current flow in a p-n junction