Is there a point in adding a 1 Ohm resistor to this LED circuit?

I am trying to figure out an appropriate resistor value for the following circuit. 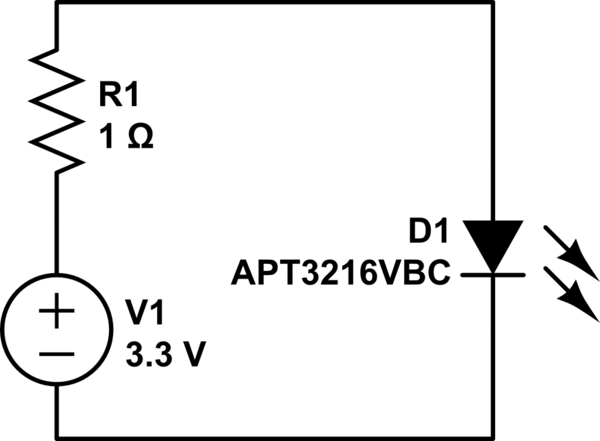 Input voltage - 3.3v Blue LED, forward voltage 3.3v LED : APT3216VBC My maths tells me that driving that LED at say 12ma, means that the resistor should be:

Checking with some LED resistor calculators, they suggest a 1 ohm resistor : http://led.linear1.org/1led.wiz

Given my voltage drop, and input voltage, what does the addition of this 1 ohm resistor actually make to the circuit?

If you want to predict the current through an LED with that little headroom, you need a better model of the LED than "forward voltage is 3.3 V".

You can see that this device has a typical differential resistance (at the operating point) on the order of 30 ohms, so the 1 ohm series resistor is probably not doing much: 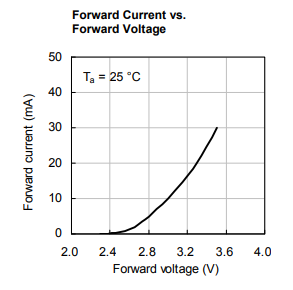 On the other hand, what the graph doesn't show is that this curve likely moves around quite a bit if the device temperature changes.

I'd recommend either using a higher supply voltage so that a reasonable series resistor can be chosen, or treat the 1-ohm resistor as a placeholder to be adjusted once you've built the circuit and figured out what resistance is needed to avoid over-stressing the device at the worst-case temperature (and be prepared for pretty big changes in brightness with temperature).

(Also notice that the specified maximum forward voltage at 20 mA is 4 V, so you might have some trouble with device-to-device variation)

LEDs are not Ohmic elements. In other words the voltage across the LED is not a linear relationship. Nor are all LEDs created the same.

Instead once the forward voltage drop is exceeded the current through the LED will rise rapidly, a change of a few tenths of volts will create a large difference in current. The resistor forces the current to reduce by taking up more of the voltage drop across the battery compared to the LED until stable state.

Is there a point in adding a 1 Ohm resistor to this LED circuit?

Not really, A 1Ω resistor will work as well/poorly as no resistor at all.

IMHO I think no resistor would work best for this LED. But I would not use this LED.

No resistor may be better than 1Ω. It is not likely that Vf will not exceed 3.3v somewhere in the visible range. When Vf reaches 3.3v current will stop increasing. This is very likely to happen before the 30 ma max.

According to the I-V curve typically the current will be 20mA @ 3.3v with no resistor. So adding a resistor would only make the LED dimmer.

The LED you specified has a max 4v Vf. While it can be run with a 3.3v supply when Vf when the LED work in the typical range. The 4v Vf max falls outside operating parameters.

so is 1 ohm here a safe choice?

Maybe, maybe not, very likely it would be safe. But not really any better or worse than no resistor.

The problem there is no minimum Vv specified.

The risk would be if the Vv were lower than typical, the current could increase to more than the max 30 mA rating of the LED. Not too likely but possible.

It would be reasonable to guesstimate Vv min could be 3v (10% below typical).
At 3.0v a 1Ω resistor would allow 300 mA. Not that it would be reasonable that this would happen, Vf will always increase as current increases. The question is: How reasonable is it that Vf will be under 3.3v @ 30 mA? Assuming the supply voltage will never rise above 3.3v.
As long as Vf is at or below 3.3V at 30 mA, no resistor is fine. As the current increases the forward voltage rises above 3.3 and it is at that point the current stops increasing. It is very likely with this particular LED Vf will always be greater than 3.3v at 30 mA. 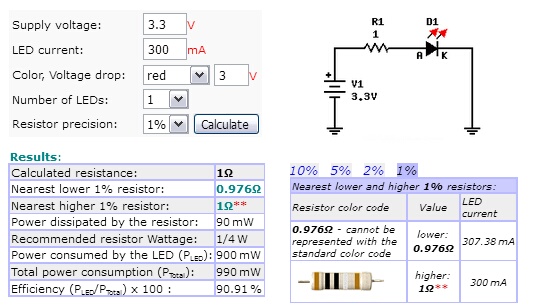 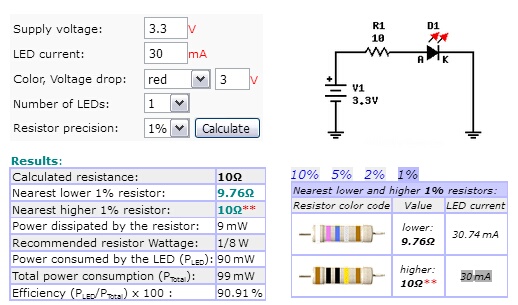 But there you have the flip side problem. If the Vf is higher then the LED may not be bright enough. With a max Vf of 4.0v this is well within the realm of possibilities.

If this circuit were in a product to be sold to others, I would not use this LED.
If it to be used for myself, I would be okay with no resistor. If there is any possibility that a component will generate a field service call, I am not going to use that component no matter how remote the possibility. Even with no resistor.

I would want to see an I-V curve closer to this: 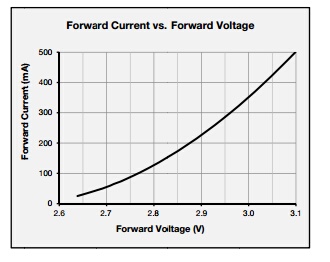 Not the answer you're looking for? Browse other questions tagged voltage led resistors circuit-design or ask your own question.

8
Can I use blue-green LEDs as MCU state indicators on 3.3 V power?
1
Driving blue led directly from GPIO
4
Current-limiting for LED when Vf = Vdd

38
Correct formula for LED current-limiting resistor?
13
How does the current limiting resistor for an LED affect current and voltage drops?
4
How to calculate current and voltage draw of a single resistor circuit?
0
LED Resistor Choice with changing voltage
1
Voltage Regulator and Resistors for LED Circuit
0
3.6V Circuit and 2.8V LED
0
Driving an LED with resistor directly from 3.3v GPIO pin of a microcontroller
3
Does resistor placement change power dissipation in simple LED circuit?
0
Choosing the right resistor for a LED circuit