I'm using a simple online simulator tool to build a passive Butterworth filter. An affirmation made in this page confused me:

Enter the filter characteristic impedance. In all cases, unless you specify a matching network (see below), this is equal to the filter input (source) impedance. For Butterworth and odd-order Chebyshev filters, this is also the filter output (termination) impedance

Firstly, I'm trying to understand why they made the choice of input impedance = output impedance.

Secondly, I have found that source impedance is not even present in transfer function. For example: 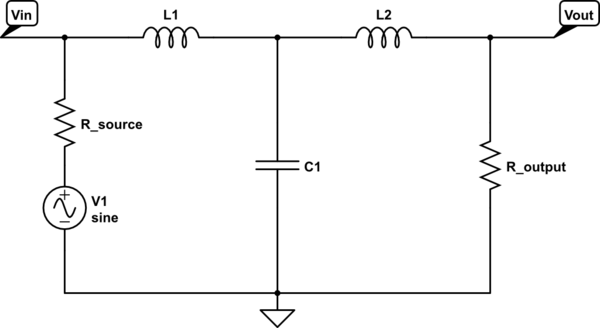 The transfer function of this circuit is given by

I have already checked that this tool produces different circuit and component values for equal I/O (using "Characteristic impedance" field) in comparison with different I/O (using "Optional Matching Network" fields to enter impedances), but I can't figure out why my reasoning is wrong. The behavior I was expecting was, as mentioned above, no changes in components values and circuit topology when source/input impedance is changed.

@Tony's answer provides one reason for why impedance mismatching might not work, but in this case, it's about two things: analitical determination of elements' values and their simplification.

LC ladder filters (Cauer topology) need special considerations in designing them because the output of each single LC stage influences, and is influenced by the next one, starting with the input impedance, ending with the output. Since LC filters are considered lossless, making hte I/O equal means full power transfer, true, but changing them means recalculating every LC element. In doing so, there are three cases:

For example, the reflection coefficient is (I use abs() to merge the first two cases):

However, as @Neil says, in the case of even orders, due to the nature of the Chebyshev filters, the response at DC starts at 1-\$\epsilon_p\$, where \$\epsilon_p=10^{A_p/20}-1\$ (Ap=passband ripple), so, because these are passive filters, there is no amplification, and the load should have a minimum allowed value. The minimum load is found out solving the following, considering a unity input load:

with usually the positive (right hand) side. For input load different than 1, simply scale accordingly. Going below will not cause explosions, but the output will be distorted. Here's a simulation of a 4th order Chebyshev (type I) with 1dB ripple and fp=1Hz, for a 1\$\Omega\$ input and a step of several values for the load: 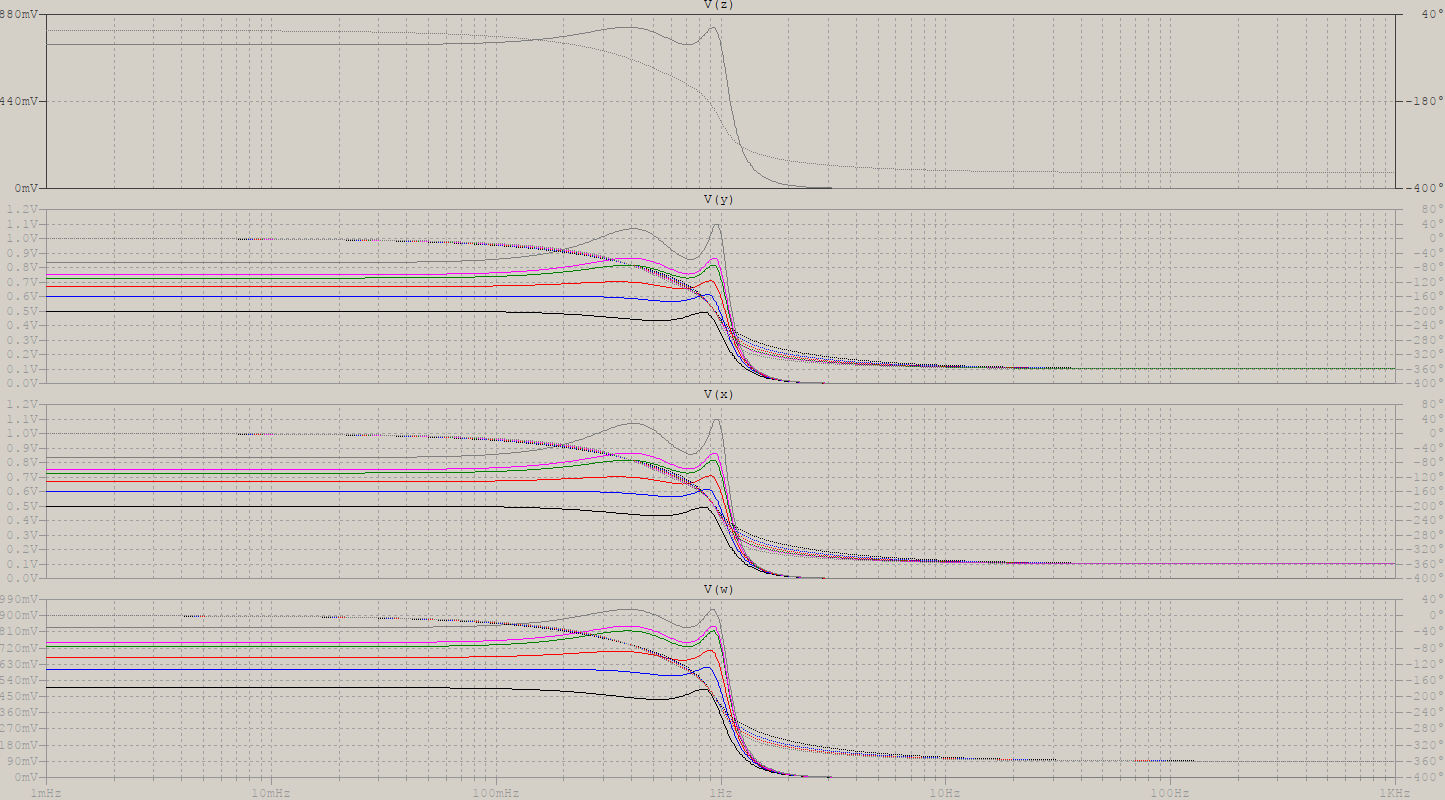 V(z) is the reference, and the rest are as follows:

As for your second question, while @Neil mentions that there are cases for keeping the input, or the output, shorted, or opened, I'm afraid in this case you simply didn't place the label where it should have been placed: before the input resistance, instead of after, as it should be when calculating a diport of this nature. For that particular T filter, the transfer function becomes:

That transfer function is written as Vout/Vin. Vin is a measurement after the effects of R_source, so of course R_source does not appear in the equation.

Passive LC filters need at least one port to be resistive to provide damping, however making both ports resistive is the norm. This is because usually RF systems usually move signals around in a defined impedance system. It's also the case that the filter response is less affected by component value variations when it's doubly terminated.

You can design filters to have one port a short circuit, or an open circuit. This is very useful when building things like diplexers. The common port can, paradoxically, be thought of as a short circuit, as its voltage doesn't change with frequency. Design high and low pass filters with final series elements into a short circuit, and connect them. It's also very useful when building an interface to capacitive input load like Pockells cells. Design a filter into an open circuit, then absorb the load capacitance into the last shunt capacitor in the filter.

Even order Cheby filters have a dip at DC, which cannot be synthesised with equal terminations, which would give unity gain at DC.

Matched impedances transfer maximal power in 2 port devices. ( by theorem of same name) However is both source and load impedance is resistive you lose 6dB in power so for transmitters this is costly so some may use 0 ohm sources for low loss from DC to breakpoint. Not having a resistive load makes the reactive filter very resonant with high Q.

Where wave reflections can cause issues from mismatched impedances , then "conjugate matching is often used so the +/- reactance cancels out.

I made this example of a 1kHz LPF that changes if you bypass the 50 Ohm so you see the effects.

The "LCL" LPF can have a zero source impedance.

Use the cursor on the chart in link to read the attenuation. (autoscaled)

Not the answer you're looking for? Browse other questions tagged filter impedance impedance-matching passive-filter characteristic-impedance or ask your own question.

2
LC Filter / Matching - Why does this cap help?

1
What is the transfer function of an LCL filter?
1
Connecting stages of active filters vs stages of passive filters
3
Input impedance butterworth filter with multiple feedback
2
Why doesn't a Sallen-Key Butterworth Filter ring?
2
Impedance matching network and power transfer to the load
0
Impedance matching and reflection
1
LC Filter Design with coaxial input and output
0
Series first Vs Shunt First Filter Design
0
Effect of Source and Load Resistances on a Filter
0
Calculating lengths of single-stub transmission line when all 3 characteristic impedances differ