Ok, I am a self-taught novice playing with an FPGA and VHDL. I have successfully implemented a number of projects using I/O but only unidirectional. Pins are either in or out but not inout.

I am now wanting to interface with an external device that has an 8-bit bi-directional data bus. To further complicate things, this bi-directional bus is multiplexed with the address bus.

On the low part of the device's clock cycle it will alway output the upper 8-bits of a 24-bit address on the data bus. The lower 16 bits are not valid at that time. At the high part of the cycle it will either drive data out or read it in. There is an active low write enable (RW) signal to indicate the direction. The lower 16 bits of the data bus are also valid at this time.

The FPGA is generating the clock for the device so I have access to the clock signal. I would also like to separate the data into two 8-bit buses to use internally, One for read and one for write. 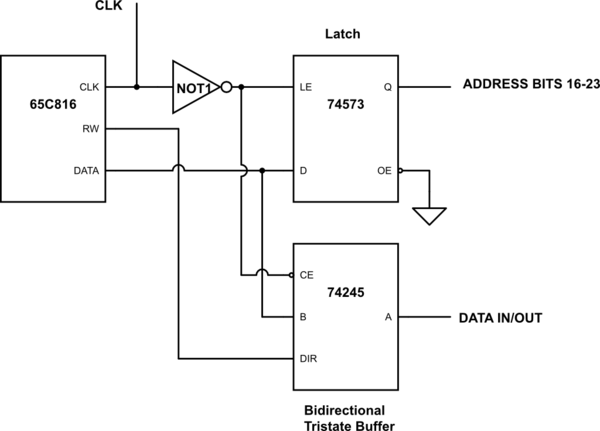 I would provide some VHDL I have tried but I'm not sure of which of the 20 different attempts to post.

Oh, and if anyone has any tips on properly driving simulated external inout signals during simulation, that would also be helpful. I am working with ISim which is part of the Xilinx ISE.

Thanks to @Humpawumpa I think I have this figured out. Looks like my problem was incorrectly handling the high-impedance state of the inout pin, and on top of that because of my incorrect understanding of when and where to set high-impedance, I was also setting up my simulation stimulus all wrong.

This is the code I have come up with incorporating Humpawumpa's answer and it looks right in the simulator. Hooray!

So basically what was tripping me up was setting the inout pin data_io to high impedance. Coming from a software development background setting data_io to 'Z' on the clock high period and then reading data from it was confusing me. In software setting a variable to some value does not give you a different value when you read it back. So I was thinking if I set it to 'Z' my input would be 'Z' when I read it. It's all just code right, LOL. Lots to unlearn I guess.

If you have an inout-pin that you use as input (while reading) set its output to tri-state.

Edit: As correctly stated by Oldfart the assignment for the input vector can be unconditionnal input <= data_io. I leave it conditional in the example code as usually when writing to the port, the incomming (looped) data is not of interest/invalid.

Not the answer you're looking for? Browse other questions tagged fpga vhdl or ask your own question.