I want to asynchronously reclock it to a second time domain.

Meta stability is solved using 2 flipflops (better 3?).
For data loss , I understood that I need the second clock to be at least twice the speed of the first clock (so 24.6MHz).

Using the above, can I expect 100% reliability ?

As you can see in the picture below (from here), the MTBF is proportional to the clock frequency and number of stages. It also depends on the "metastable resoltuion time", which is shorter for faster logic.

With fast enough logic and enough synchronization stages, you can design for one failure in the lifetime of the universe, on average. Keep in mind that if you are running more than one device, you have to divide your MTBF by the total number of number of devices.

Also, make sure to stay away from Infinite Improbability Drives. 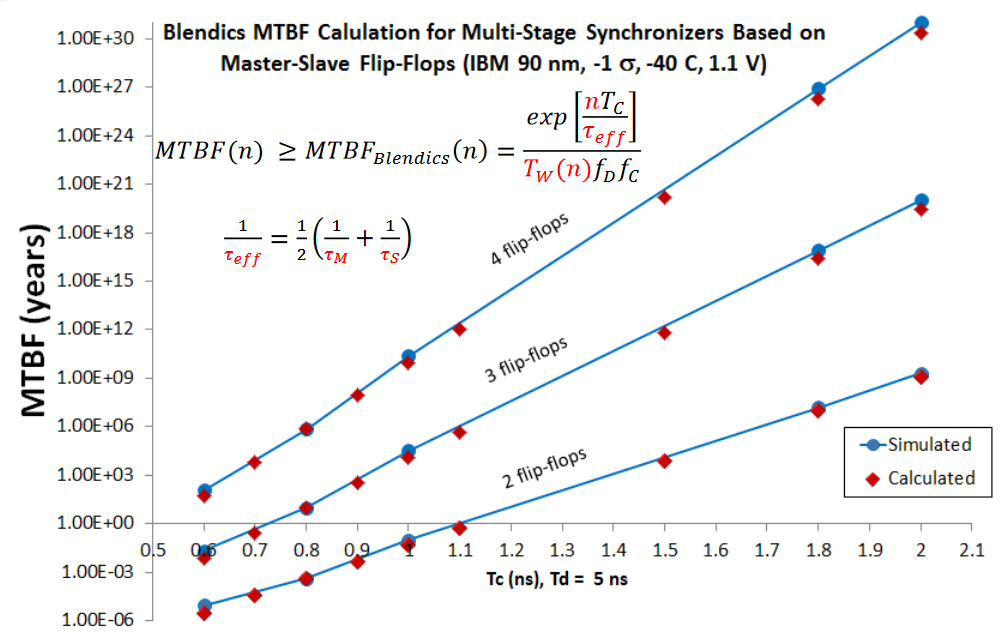 To determine how often a Flip Flop will go to an undefined state, plug the data into one of these equations to calculate the MTBF. The first equation is the general calculation, while the second uses a worst case input data rate of half the clock frequency.

These are device dependent. Resolve time (among others) has to be looked up, via the data sheet (if it's provided). As a rule: The faster the flip flop used, the better the MTBF for a given circuit. The faster device families have lower Set-up and Hold times. This reduces the window of occurrence.

Not the answer you're looking for? Browse other questions tagged flipflop cdc metastability or ask your own question.

4
If a flip flop has a setup violation and goes metastable, is it guaranteed to settle to the input value when it finishes oscillating?
4
cross clock domain databus
3
Clock domain crossing timing constraints for Altera
0
Do any flip-flops use separate clock levels for “sample” and “propagate” events
2
Simple questions about synchronizer
3
Metastability Deserialization and clock crossing domain
1
Clock Domain Crossing
2
gray code clock domain crossing FIFO fast to slow
1
Clock domain crossing of a bus between related clocks