Is there a need to use public OUI numeration for "private" Ethernet ports?

So I'm working on a product which will have two Ethernet ports:
One for "public" network, which will be used by the customer, and one internal, within the machine chassis, which needs to be opened, which should be only used by the service technician and internal accessories.

The dogma to which I was exposed to during my network training says that all Ethernet ports should use registered OUI numbers, but on the other hand, I'm can't really think of a reason why would we need an official MAC address in this case.

So my question is:
Is there any reason why to use the officially registered OUI numbers for the internal Ethernet port?

As Marcus suggested, this is where the locally administered MAC addresses come handy. Here is the structure of a MAC address (taken from Wikipedia): 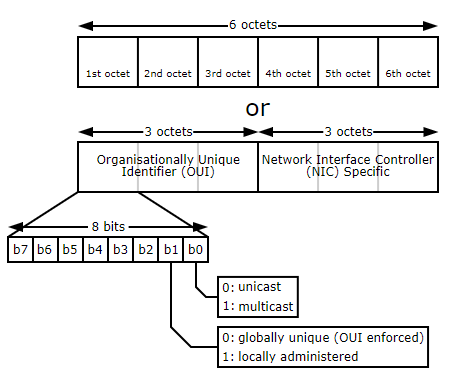 However, this requires that you can ensure the following thing: this port should never be connected to a network where there might potentially be other nodes with locally administered MAC addresses.

But equipments with locally administered MAC addresses are not supposed to be found on the market. If the only equipment that can potentially be connected to this port is a regular laptop, or even a whole newtork containing only regular switches/routers and computers, there is no such risk.

Now, there are two strategies: either you decide on a single MAC address and assign it to all your devices (they will all have the same address), or you define a scheme with a fixed and a variable part (the variable part can be taken from the serial number of the device if there is one available somewhere), so that each device has a unique (locally administered) MAC.

The single MAC address scheme is only possible is you can ensure that:

Regarding your concern of potential MAC address filters set by the IT: this isn't likely. MAC address filters are typically set on a network equipment (wifi access point, network switch, ...), and are set so that only registered nodes can connect to the network. If this is the case, you'll have a problem anyway, because your device won't be registered whether it has a regular OUI-assigned address or a locally administered one. I have never seen a MAC address filter set on a computer station, even in totally paranoiac IT environments.

As a conclusion, I think having a locally administered address in this case likely won't lead to a problem. However, problems are more likely to arise if you assign the same address to all your devices. I'd rather use unique addresses per device if it is achievable.

Not the answer you're looking for? Browse other questions tagged ethernet mac regulatory or ask your own question.