Why wouldn't my latching switch circuit turn off?

When I connected it to my project (~140 LEDs) I found that I could switch the circuit on but (often) not off. A more careful reading of the article told me that this is expected because "If the load impedance contains active devices such as LEDs, the load voltage at the instant Q2 turns off may be large enough to bias Q1 on via R4, thereby preventing the circuit from turning off properly. The presence of R5 pulls the OUT (+) terminal down to 0V when Q2 turns off, thus ensuring that Q1 turns off rapidly, and allowing the circuit to revert to its unlatched state in a proper manner."

I swapped out the 10K on R5 for 5K and the switch works reliably with my project, but I don't understand this explanation. What was happening when I pressed the button but the circuit didn't turn off? 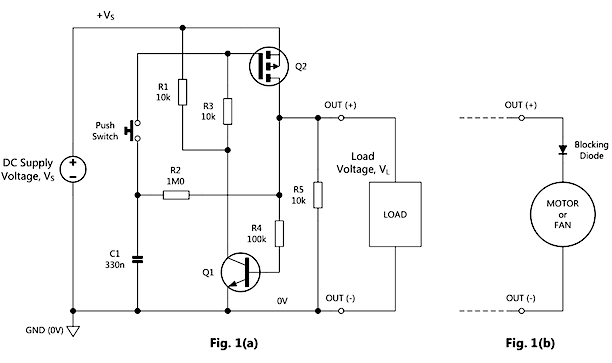 When you push the switch in order to toggle the circuit off, Q2 is closed as long as the switch is pressed and C1 is charged, whether Q1 is 'biased' or not.
I guess your LEDs behave capacitively?

That would explain that Vout doesn't 'immediately' return to zero, but that R5 takes some time to discharge the capacitance in the load, which however at the same time will charge C1 through R2.
Your reduction of R5 speeds up the discharge, but increases the power dissipation in the on-state.

Maybe an increased (doubled) value of C1 would give the original R5 more time to discharge the load's capacitance.

I think the issue might be that the combined forward voltage of the leds is causing the load to no longer conduct once the voltage drops to say.. 3v. The load needs to pull the output low for the circuit to switch off, and 3v might not be low enough for that.

Does it work with just the 10k, and no LEDs?

Not the answer you're looking for? Browse other questions tagged transistors led bias or ask your own question.