I went for an interview in BARC India for scientist position. They asked me to draw short transmission line. Then they started asking

What does inductance represent? I said leakage while transmission

Then they said how we can decrease it? I said keep a series capacitor in series.

Then they asked why we can't make it 0? It will be good that power transfer capability increases

Why we don't do that? Here I got confused. Please someone clarify this concept.

My question is that

What will happen if we use a zero inductance line for AC transmission?

Its only impedance is Z = R + jX where X is positive because it is an inductance. (See first sketch in diagram, this is what you should have drawn. Vs is sending voltage and Vr is receiving voltage, so we have a frame of reference of this line.) 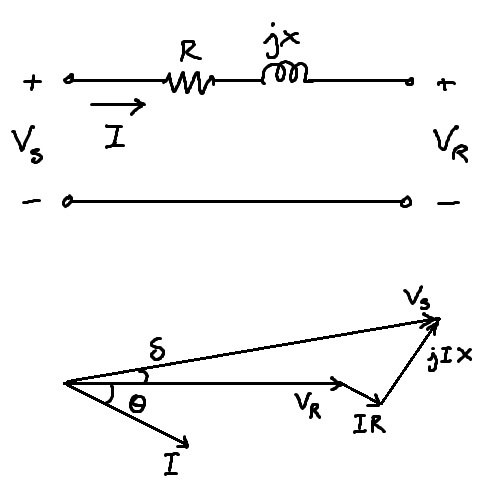 Inductance in this model relates to the transmission line's capacity to move real and reactive power across the line.

The second sketch shows a phasor diagram for a lagging power factor (theta) system state, meaning the voltage sinusoid (Vr) leads the current sinusoid (I) if those phasors are moving CCW. When the inductor is added, we see a phase shift from Vr to Vs, which we call the power angle (delta).

The transmission line will move maximum Real Power (P = I^2 * R) across the line when the power angle is greatest, meaning Vr and Vs are 90 degrees out of phase. As shown by the phasor diagram, the jIX portion of the Vs vector sum (due to the inductance) will increase this phase difference.

The transmission line will move Reactive Power (P = I^2 * X) across the line when Vs has a greater voltage potential difference than Vr (per unit). The reactive power flows directionally from higher voltage to the lower voltage (per unit). As shown by the phasor diagram, the IR portion of the Vs vector sum (due to the resistance) will increase this voltage difference.

However, our terms of sending and receiving are in fact arbitrary to the frame of reference. If Vr has a greater voltage than Vs, reactive power will flow out from Vr. We will simply choose to describe the power flow as negative reactive power, since power would flow into Vs, contrary to its name V(sending).

The most important thing to note is that these simplified concepts allow us to understand how we can control the magnitude and direction of real and reactive power flow in an electrical grid system.

An inductance in the transmission line only affects the amount of reactive power drawn from the grid. Hence, when there's more inductive load, to make sure the grid voltage remains around ~rms 220V, capacitor needs to be installed at the power supply or anywhere in the grid. The capacitor will be across the powerline and ground. You can think of it as a reactive power source which supplies the requirements of the reactive power required by inductive load.

Not the answer you're looking for? Browse other questions tagged power-supply power mains inductance or ask your own question.