For a crystal oscillator circuit, what effect would a series resistor have on the inverter input?

In some application notes, there is a recommendation to use an external resistor in series with the OSC_OUT pin to reduce the power dissipated by the crystal, if necessary to do so. A good example is from AN2867 STM32 oscillator design guide called "R_Ext". 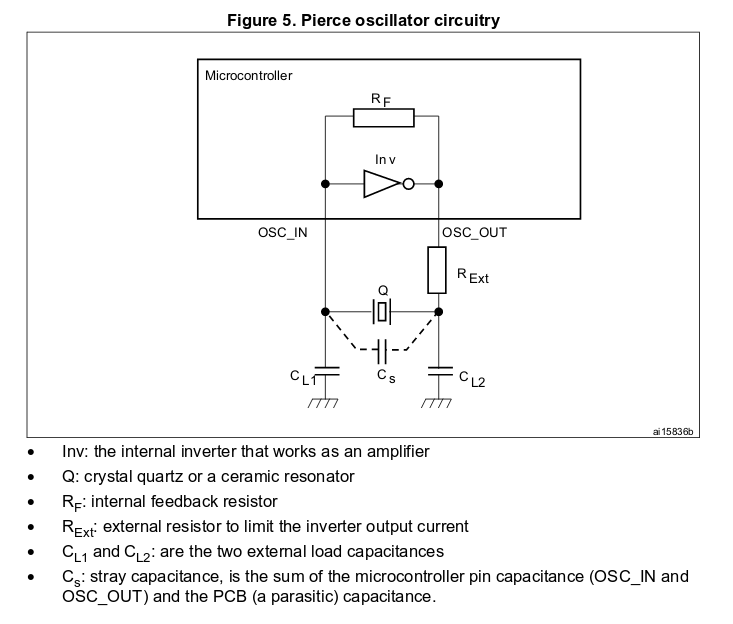 Note there is never a resistor on the OSC_IN (EXTAL) leg in any application note and thus I never considered it for any transconductance calculation (Note 1).

So I've been a little bit thrown out by the S32K datasheet which explicitly shows an extra (internal) 280R resistor on the OSC_IN (the S32K calls the pin EXTAL) pin (p27, Figure 8): 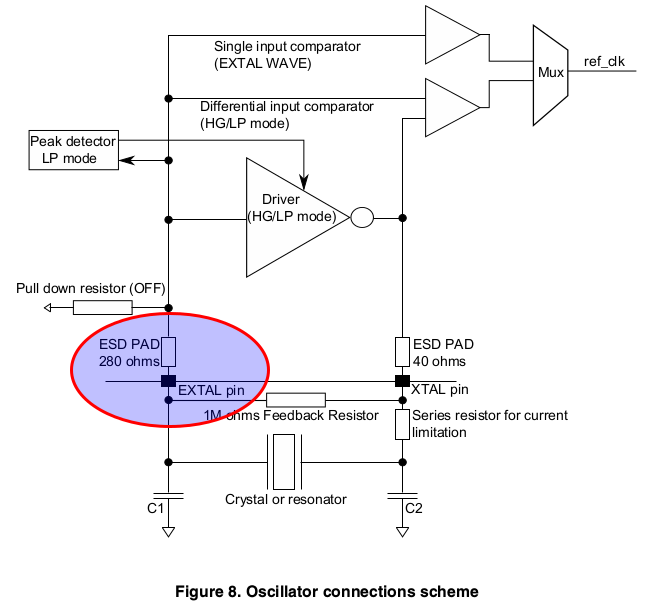 Unfortunately, the 280R is 2-3 times larger compared to the ESR of crystals in the 16MHz range (in the order of 100R, e.g. this or this), so if it does indeed affect the transconductance calculation, the effect is non-trivial to the point where the circuit may refuse to oscillate.

The transconductance calculation I am referring to is the modified form that takes R_Ext into account as explained in the STM32 document referenced earlier:

Part of the question is whether the resistor on OSC_IN needs to be included anywhere in this calculation.

The questions are about the 280-Ohm resistor on input. The picture clearly states that it is "ESD pad", and the value "280" likely represents the lump model for this pad cell.

Yes, the resistor generally reduces overall gain of the amplifier (due to small parasitic cap on the internal inverter input), but the loss of gain is likely compensated in the inverter design.

Not really, see above.

This is just a model for ESD protection on the pin. Since the actual internal input impedance is likely in mega-Ohm range, the 280-Ohm shouldn't have much of impact. Even if the inverter input has 1 pF parasitic capacitance, the RC cut-off will be in ~3 Ghz area, or well outside the typical working frequency of 20-40 MHz

Therefore, the input resistor should be of no concern for the overall design.

The crystal does NOT vibrate at some harmonics. It is the only purpose of the crystal to provide its inductance to form a 3rd-order lowpass (Rext+rout)-CL2-L-CL1. Only such a lowpass is able - as mentioned in Andy aka`s comment - to provide the required 180deg phase shift at one single frequency only.

(Such a crystal can always be used as a high-Q inductance at a frequency somewhere between the serial and parallel resonant frequency.)

Together with the inverting properties of the active element this allows to realize the required positive feedback for oscillation.

In your top diagram RExt does two things:

Note the description for RExt. It even says "RExt: external resistor to limit the inverter output current".

In the ideal case, the inverter output has 0 impedance. In that case, a capacitor on its output won't change the voltage at all. CL2 becomes irrelevant, and the crystal is always driven by the square wave out of the inverter.

RExt and CL2 together form a low pass filter that attenuates the harmonics in the output of the inverter. After all, only the fundamental does anything useful. Crystals can vibrate at some harmonics. If the loop gain is over unity at any of these harmonics, then the whole oscillator might run at that frequency. In some cases, this effect is harnessed deliberately to run the crystal in "overtone" mode.