I'm trying to build a boost converter with the following specifications.

The thing I'm confused about is how to select the right core for this design. I know that this design would need a EE core but rest selection parameters are what I'm really confused about. Such as selection of operating flux (Bmax) (is it based on power, current or it's independent), core material, interpreting Al value given in the datasheet, selection of core with respect to power rating of the application. I read articles from "tahmidblog" here about transformer design. There he explained rest of the parameters calculations excellently but choosing a core particularly is what I'm not understanding clearly. Please help me understanding it, for example how to select a core material depending upon power?

Such as selection of operating flux (Bmax) (is it based on power, current or it's independent)

Bmax is based on the residual current that flows in the primary irrespective of load. So, it's not based on power-throughput but it is based on current (but not load-current).

Imagine you stripped away the secondary and drove the primary winding. You have primary inductance and when you apply a voltage to that inductance, current rises linearly (hopefully). That rising current is determined by: -

Then when you activate the other transistor, an equal value of inductance is connected that linearly ramps down the flux to a negative value and the process repeats: -

The average level of flux is zero and it peaks at negative and positive values. That is what you ideally want. But a magnetic core isn't perfect and it does saturate and that starts to produce anomalies in the current so you try and keep these anomalies at bay but you do have to accept some saturation. 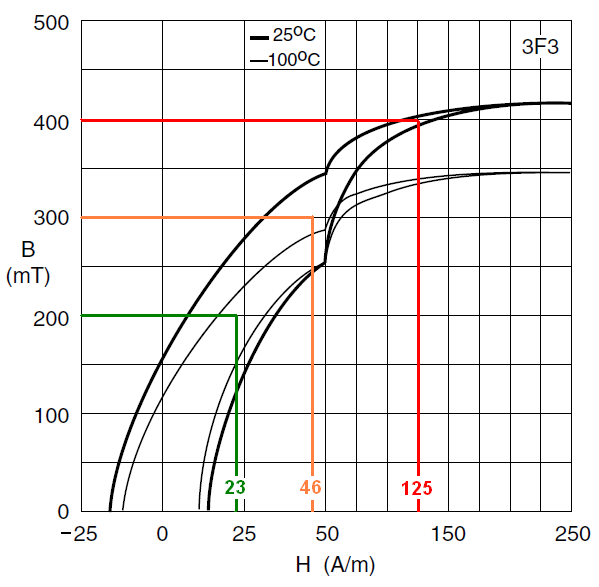 The material hard saturates at about 400 mT (at 25 °C) and it will get hot if driven at this level (see red line in picture). As it warms the saturation level drops to about 340 mT (at 100 °C) and things just carry on getting hotter. This must be avoided.

So, instead of driving it at 400 mT consider driving it at 200 mT (green line). Now it is fairly temperature stable should temperature rise due to (say) copper loss. You can also say that maybe 300 mT is a good level but I initially tend to stick at 200 mT for this type of material.

Getting back to the root problem; the primary inductance is driven with a voltage and will produce a triangle wave of current (and flux) and, the peak of that current is the point at which flux is highest (and hence flux density is highest).

Note that in the BH diagram above, the H value is about 23 ampere turns per metre to deliver 200 mT.

And this is now getting towards solving the issue of how many turns are needed. If you chose a core type that has an effective length of 150 mm and an inductance factor (\$A_L\$) of 2000 nH/t and initially considered 18 uH to be an adequate inductance then you will need three turns because one turn gives 2 uH and inductance is proportional to turns squared hence 3 turns gives 18 uH.

I should say that I'm explaining a process rather than giving a solution that is suitable for the OP....

interpreting Al value given in the datasheet

For one turn it tells you how much inductance you get and you multiply that by turns squared to give you total inductance.

how to select a core material depending upon power?

If you can fit 6 turns of thick copper wire (and don't underestimate how thick this needs to be to deliver nearly 100 amps of load current AKA 1000 VA from a 12 volt source) AND you can fit the secondary winding then this will work providing the copper losses are not so excessive to cause problems.

And, of course, with the split primary design you have, you'll need 6 + 6 primary turns because only one half is active at any time. I have done a similar design for about 200 watts and to keep efficiency as high as I could, I hard switched the primary as per your design but the centre tap I fed from a 95% efficient synchronous buck converter to do the regulation.

I'm not saying that this is the best route to go for you but I am saying that for my design this suited what I needed to achieve AND I ran at an operating frequency much higher than 100 kHz i.e. 600 kHz. Running higher than 100 kHz is probably what you'll need to do so maybe consider 250 kHz and choose a slightly more exotic ferrite material such as 3F3.

Choosing a core can be very difficult and a bit of try-this, try-that theoretically is par for the course.

We usually limit the core flux due to thermal considerations. With ferrite at 'normal' frequencies in the mid to high 10s to low 100s of kHz range, these tend to bite before simple saturation. As the core power dissipation is due to a certain flux dependent energy loss once per cycle, a high frequency core will have to run at a lower peak flux density, which means less energy loss per cycle, than a low frequency one. Generally the ferrites with the lower energy loss per cycle are more expensive (surprised?)

Not the answer you're looking for? Browse other questions tagged transformer switch-mode-power-supply power-electronics push-pull or ask your own question.