I have a problem witht the AC analysis of a circuit. The circuit is a voltage driven constant current driver: 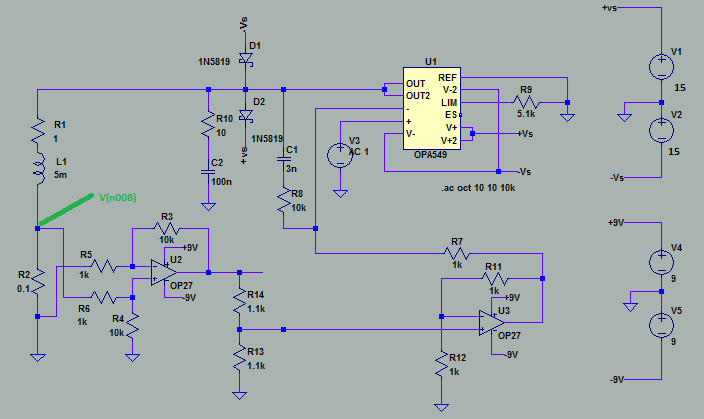 It is intended to drive a constant current into L1 (R1 being the series resistance of the inductor). R2 is the resistor to sense the current passing through the coil. U2, U3 and associated resistors are just there to rescale the voltage so that a variation of 1V on V3 will lead to a variation of 1A in L1.

The AC analysis give the following response:

That is actually normal because at 1kHz, the coil reactance is R=wL=31 Ohms. The power supply being +/-15V the current passing through the coil and through R2 cannot be higher than 500mA (15V/~30 Ohms) meaning at 1kHz the amplitude is actually divided by 2 so the gain should not be the same at 10Hz and 1kHz.

This information is not visible on the AC analysis so my question is: Is LTSPICE ignoring any power supply limitation of an OPAMP when it does AC analysis?

Your circuit is a feedback system that sets the voltage at node8 to produce a constant current through the inductor. That is exactly what it is doing. When the inductive reactance rises, the circuit compensates and drives a higher voltage at the top of R1 to maintain node8 voltage as constant as possible.

Not the answer you're looking for? Browse other questions tagged operational-amplifier simulation ltspice or ask your own question.

3
Signal on top of PWR line
1
AC analysis of opamp loop in LTspice
0
Ideal integrator op-amp DC offset at output?
2
MP111 Op-Amp: Non-linear gain at low input voltages?
0
How does this BJT affect the circuit? If it does, how should I simulate on Circuitlab to see the effect?
1
Amplification Circuit for Generating High-Current Sinusoidal Signal to Feed a Coil
2
Isn't conventional current supposed to go from high potential to low potential ? If yes, then why this rule is not respected in opamp using AC?
1
Taking into account the mutual inductive coupling analytically in LTSPICE