I have this schematic:

which supposedly makes the two LED flash alternatively with a period of 1.5s The thing is that the one connected through the NPN transistor flashes, but in it's "off" state, still has about 6V going through it, and the other one doesn't flash and it's always powered with 12V.

I double checked my connections, everything is fine. I don't need resistors for the two LEDs because they are at 12V

I assume you mean that the LEDs have internal current limiting so that they can be operated from 12 volts.

When the 555 output is High, its output will be about 6 volts - well below the 12 volts on the BC327 emitter, so the BC327 will always conduct, allowing its LED to light.

This should work for you.

In the below circuit, I've retained the NPN drive and added a second one, with a third transistor to invert the drive signal. When Q2 is 'on' it diverts the ~27mA base current away from Q3 so Q3 goes off (at the same time that Q1 turns on). I've shown the internal resistors in the LEDs so as not to confuse future readers. 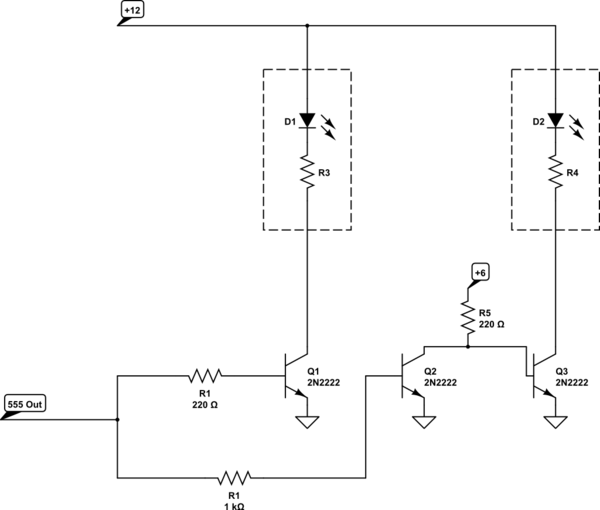 Not the answer you're looking for? Browse other questions tagged transistors 555 or ask your own question.

1
Modifications to 555 LED Fade Circuit
4
555 fading in&out if possible with pwm & led array
1
Why does 3-to-5 volt with transistor not work the way it should?
5
How does this transistor dual LED flasher circuit work?
1
SR Flip-flop with 2 npn transistors - initial state
1
LED strip doesn't turn off completely by transistor
3
General circuit debugging techniques, and my 555 timer in particular
0
High(er) Current AC Flasher Circuit
0
Replacing NPN Transistors that failed with similar/better?