Some while ago, while memorising the 74xx series part numbers, I came across the concept of a device with a "3-state" output. The idea, as best as I can tell, is that the device outputs logic low, logic high, or "not connected", basically. 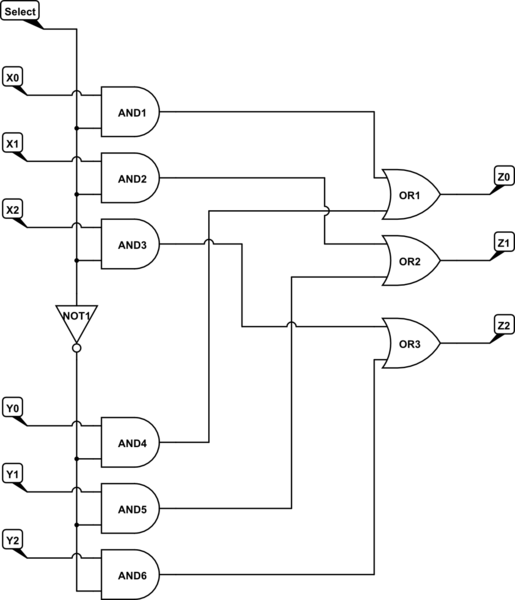 (Schematic editor doesn't seem to have the symbol for 3-state buffer... unless I'm missing something.)

This uses significantly fewer gates, and appears to do the same job.

...or does it? Looking at it today, knowing what I now know, I see two potential problems:

From browsing this site, I get the strong impression that leaving any gate input floating is a catastrophic disaster, and that such a thing must be avoided at any cost. Perhaps some pull-down resisters would solve that; I'm not sure.

Then there's the fact that if (say) AND2 tries to drive Z1 low and AND5 drives to drive it high, we now have a short circuit. Presumably this will cause instantaneous destruction of the ICs involved. (I don't think it can fry my power supply; it's supposed to have over-current protection. Likewise, I don't think there's a danger of actual fire or explosion...)

In short (haha!), it seems that this circuit can only work if all propogation delays can be exactly 0 attoseconds, which seems unlikely.

But then, if it's not possible to use 3-state gates... why do they exist? Have I fundamentally misunderstood what they're for or something?

You have it correct but are tripping over your brain over the simplicity of it. Tri-state means the outputs can be shut off so they put no data (current) onto a common data-bus.

You are also correct in that there has to be an "OFF" time in which the data bus is not driven by any device, hence the reason you see most all data buses with pull-up or pull-down resistors so it is not 'floating', which would pick up noise and have unknown states on the data lines.

After so many pico or nano seconds another device can come out of tri-state mode and drive the data bus with whatever data it has.

This delay time also applies to the address bus if the CPU/MPU shares it with a DMA controller or another CPU/MPU.

In all cases the delay-before-takeover MUST be built into the hardware (faster response) or software (slower but works) so that you do not have a 'collision' between 2 devices driving the bus at the same time.

Collisions can lead to corrupt data or a blown IC, so the wait time, however small it is, is very important.

3-state buffers are used in computers to multiplex different peripherals onto a common bus.

The problems with underlap aren't as severe as you fear. The capacitance on normal inputs will keep them at the previous logic level, for the few moments before the new driver asserts its output.

The problems that could arise with overlap aren't as severe either. All gates have outputs with a limited drive capability, and can withstand a short circuit for a few moments. Although two outputs fighting to take a bus to different levels could/do take the bus level to an invalid logic level, this will only happen within a tiny time window, and any proper system design would not be trying to read the bus state at that time.

Not the answer you're looking for? Browse other questions tagged digital-logic logic-gates tri-state or ask your own question.

2
Recommendations for analog tri-state buffer?
6
SPI chip select optimisation
1
Non-Inverting Tri-State buffer with transistors only possible?
5
Theoretical gates vs real gates
1
Pull-down resistors on logic gate and decoder inputs?
0
Down counter using 4510 IC
1
Bus contention when addressing tristate buffers by decoder output
5
Why are the outputs of these gates tied together in the Apollo Guidance Computer?
1
Do more logic gates in series mean more slowing of the output result?