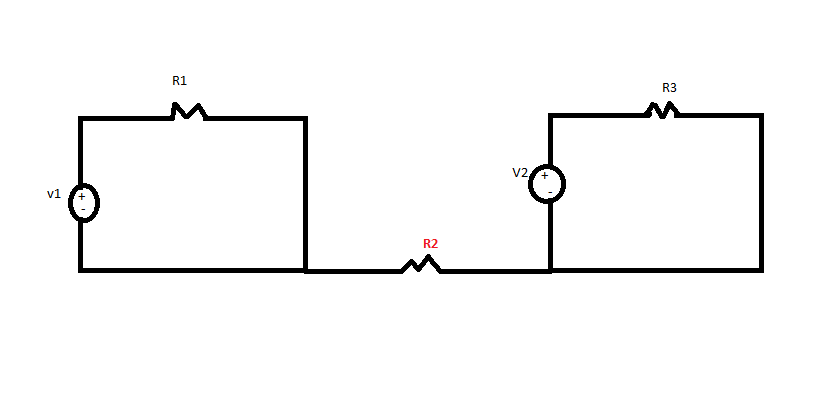 why does the current in R2 remain always zero regardless the value of other parameters(V1,V2,R1,R3)?)

This is more a physics question, not normal electronics.

OP question is probably caused by a common physics misconception: "Current" is not conserved. Current isn't substance-like. It does not flow, instead it just appears and vanishes. (Wave a magnet near copper, and current springs into being from nothing, with no source or sink.)

On the other hand, charge is conserved. Charge is substance-like. Wave a magnet near copper plates, and the sea of mobile electrons within the surface will begin moving, and a current will appear inside the metal. Where is this charge? All metals are always full of electrons.

And ...if charge is like water, then electric current is like water-motion. In other words, the phrase "flow of watermotion" is wrong. The correct phrase is simply flow of water. Water moves from place to place, while "watermotion" just appears and vanishes. (What flows in rivers? "Current?") And in E&M physics, the phrase "flow of current" is just as wrong. Electric current is itself the flow: it's a flow of charge. So, the correct phrase is simply "flow of charge." In circuits, charge flows from place to place, while current just appears or vanishes. Everything becomes simple if we strike out "flow of current" everywhere, and instead speak of "charge flows." Like below:

Still we can think like an EE rather than a physicist. In the OP schematic, if R2 is always full of charges, and there is a flow of charge inside R2, then the charge has no return path, and it must build up in the two circuit-loops shown above. Treat them as two capacitor plates. We add a capacitor "C1" (1pf?) Perhaps place it between R1 and R3.

Final answer: in a real circuit, for DC supplies during turn-on, perhaps a few nanoamps briefly appear in R2. It depends on the exact points where parasitic 1pF C1 is connected. But then it dies away almost instantly. After that, the flow inside R2 is zero, since there's a C1 picofarad capacitor in series with R2.

The OP question is for a DC circuit. What if the power supplies were AC? In that case we'd see a small flow in R2, where the return-path for the complete circuit was the invisible capacitor. The closed circuit goes through the space between the two loops. (Better add even more low-value parasitic capacitors, between every circuit node.)

The answer is clear: charges in DC circuits can only flow in loops, since otherwise we'd get billions of volts appearing. To eliminate any need for million-volt power supplies, our circuitry must resemble flywheels made out of charge: closed rings. "Complete circuits." Or instead, if your flashlight batteries were rated in billions of teravolts, then perhaps you could create some milliamps in open loops for awhile, until the picofarads of space-capacitance became filled with enormous e-fields. In the real world we'd just get lightning bolts. To work with such teravolt D-cells or tiny hand-held Wardenclyffe towers, either use them in hard vacuum high earth orbit, or embed it all in solid quartz!

too long didn't read; wires are always full of electrons, so circuits are like flywheels made of electrons. Cutting a circuit is like applying a brake to the flywheel. That gives us the closed-circuits law. In above OP circuit, we have two flywheels, but R2 isn't part of either one. To cause a continuous current inside R2, R2 has to be one part of a wheel made of movable charges.

Let me turn the question around. "How much current do you think should flow through R2?"

No current flows because there is no potential difference across R2.

Another way of looking at it is that if current did flow somehow that there would be an imbalance of charge which would cause current to flow the other way. Imagine that (conventional) current flowed from left to right through R2 then the left side would take on a negative charge and the right side would take on a positive charge. That would create a potential difference or voltage between the two sides so the current would flow from + to -, that is, from right to left. The result would be that the voltage and current would fall to zero.

A water analogy might help. The two voltage sources in your diagram would be replaced with circulation pumps. Water will be pumped around the V1 R1 loop and around the V2 R3 loop. Water can't go from one loop to the other as there is no return path.

Not the answer you're looking for? Browse other questions tagged electrical or ask your own question.

1
Why isn't line to line voltage zero?
1
Finding Current through element that offers some resistance and only permits current in one direction
4
Does current have a physical effect on wire?
2
Where does branch circuit neutral current go in a single phase or three phase electrical panel?
10
Why does the current not skip resistors R3 and R5 when R6 and R4 have no resistance?
2
How current is steady after pinch off voltage?
0
shorting method of current source and voltage source
0
Why we see a spark when we connect a plug into an already switched “ON” socket?