Why is there a divider circuit here?

So I'm pretty new to electronics and just started playing around with the Arduino to learn the basics. In one of the projects there was just a simple button and 3 LEDs that are controlled by the Arduino. Following is the schematic: 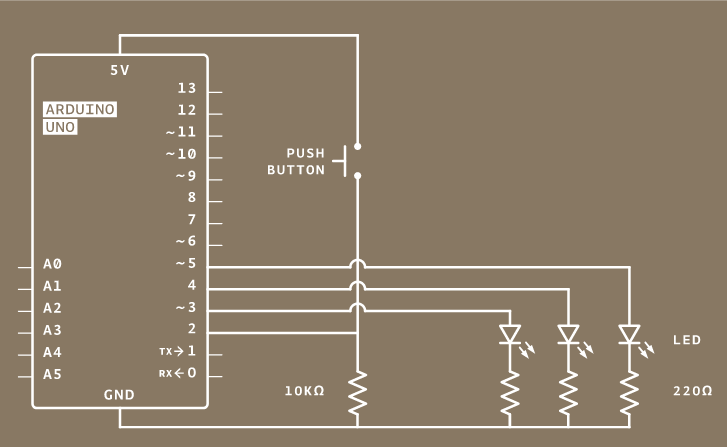 As there is no explanation in the book as to why there's a 10KΩ resistor, I did some Googling as to why it's there. I found out it's a voltage divider and keeps a 5V \$V_{out}\$ into the Arduino 2 pin.

My question is, is this resistor necessary? I know it follows the following equation:

So if there's no \$R_2\$, I'd be dividing 0 by 0. In which I'm guessing it's a short circuit? But any resistor of like 1Ω would still allow the 5V \$V_{out}\$. Which would mean that any resistor avoids short circuits? What if I don't connect it to ground at all? Can't it flow just directly from 5V to pin 2 through some internal ground?

I'm kind of reluctant to just try it out myself and see what happens out of fear I'm going to fry some components.

If you tried to replace the pull-down resistor with a straight piece of wire, it would create a short-circuit between +5V and ground whenever the button is pushed. So a resistor is required.

There's nothing magic about the value 10KΩ, but it's a common "standard" resistor value for pull-downs and pull-ups in digital circuits. The resistor must be large enough to prevent dangerous levels of current from flowing between +5V and ground when the button is pushed, but also small enough that the input pin is correctly sensed as a logic LOW when the button is not pushed.

it's not a divider. The input pin 2 floats at an undefined potential without it. So the resistor pulls the pin to 0V when the switch is not pressed. When the switch is pressed the pin goes to Vcc.

It's called a pull-down resistor (you will also see pullups quite often).

R2 is 10k. R1 is milliohms (im guessing 10) resistance of the switch. When the switch is closed the voltage would be approximately 5 * (10k / 10000.01) which is basically 5V (it is reduced by maybe 5 microvolts if my estimations are accurate

Not the answer you're looking for? Browse other questions tagged arduino resistors voltage-divider or ask your own question.

7
Arduino Question regarding the resistor
2
What is the power dissipated by a resistor
0
Why is the digital out acting as ground on arduino?
4
Voltage Divider-like circuit with multiple sources
0
Powering Arduino from a voltage divider
0
Voltage divider circuit getting hot
0
LED strip lights not working properly on DC power