Can radar/lidar sensors for self-driving cars be designed to ignore deliberate interference?

A separate question that arises is what happens when a bad actor deliberately attempts to jam the sensors? Can deliberate interference with the radar/lidar be avoided, or does the driving software just have to include a fail safe mode (e.g. pull over until the interference is gone) to handle it?

Going further, would it be possible to assure that the sensors were not receiving deliberately false but apparently valid data that could cause the vehicle to crash?

This is actually topic of ongoing research, several PhD dissertations and a lot of money invested in the auto radar jamming industry. Military researches were made for jamming/misleading radars and also to prevent that from an opponent.

The efficacy of jammers made them illegal in most countries in the world, not that many drivers were caught and fined for using it since it's hard to find which one used the jammer from many cars passing by.

Just search google for police radar and laser jammers and you will find plenty of options.

There is a major difference that makes the requirements for an auto radar much higher to be used for unattended driving, they must to be available any moment.

Even military applications can survive few seconds of blindness without major damages.

Lidar is somehow more resilient to jamming but it cannot be used in close proximity as crowded crossroads.

What can be done?

Somehow, the best is to combine data from all sensors and rely less on weak ones. Tesla's bet is to use visual camera as the main sensor in taking decisions which makes sense to me since the best self driving system ever use only two cameras and two accelerometer/gyroscope units. That is a human driver. I pointed this in my answer to the other related question but it seems that there are many fanatics ready to blindly rely on the new advanced technologies. It seems that people that used radioactive blankets for treating arthritis (as the cutting edge technology of their time) in the early 1900s still were capable of having descendants.

The industry is still playing with different solutions that might work while based on the good will of the others but in the end I think that the authorities will transition to smart roads equipped with sensors and AI that will guide the vehicles which overall is much cheaper and much efficient. Of course this will take "self driving" out of it's meaning.

I think that it is always possible to create the interference required to disturb the signal. Put in another way: it is impossible to make a system which can handle any kind of interference.

So the "fail safe mode" cannot exist, when I know how your "fail safe" mode works, I am sure I can interfere with it. At its simplest, I just generate a similar signal with a stronger magnitude and that will then overload your receiver preventing you from receiving your own signal.

So proper collaboration between the sensors (making sure they are resistance to interference from each other) is needed and in everyone's interest.

This is a defence in depth issue

Any given sensor can be jammed or be fed data that is valid (to the sensor), and we must assume that a bad actor will do those things, and sometimes with multiple attack vectors.

The various mechanisms to deal with it come from many backgrounds including defence, avionics and systems and network architectures to name but a few areas of research.

From my time working with flight control computers, the first line of defence when a sensor was jammed (these are normally triplex systems, so the system voted) was to ignore the outvoted unit and reset that channel.

With sufficient sensors of a given type it should be possible to determine whether an attack is taking place (the data for the different radar / lidar sensors would not be the same under normal conditions so an attempt to inject data would result in a detection for a 3 or 4 channel system).

This would require that the sensors are being compared for such things, of course. Whether that is currently being done is a question I cannot answer.

With sufficient different types of sensors (which would all be multiple units for basic safety anyway), it should be possible to defend against both jamming and data injection attempts if the algorithms to identify implausible inputs are properly defined; this is an area of intense research.

During an attack event, the rules (known as control laws in avionics and seem quite appropriate for self driving cars) might need to be relaxed to ride through the event. The three fundamental types of control laws may be found in the previous link.

One example of where injected data would be implausible is a 3 beam doppler radar (often used for navigation), where the only time all 3 beams would return the same result is if the vehicle is not in motion; combined with other sensors, an attack could quite easily be detected.

I hate to just post a link, but to be honest this article is a better answer than anything someone will type here for free. It answers your question quite directly from the perspective of systems designers directly working on this problem. 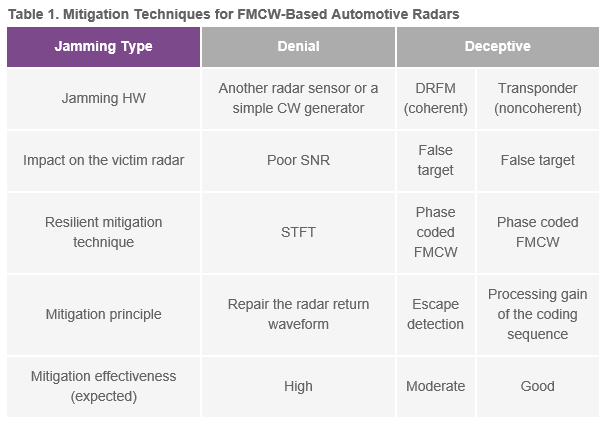 What you'll see is that there are two types of jamming to address in FMCW automotive radars:

The article details scalable solutions in a very readable way. Denial can be solved by first identifying and removing the tone in the frequency domain from the raw IF coming out of your FMCW transceiver, although this is quite computationally expensive. Deceptive jamming requires more exotic mitigation techniques.

Not the answer you're looking for? Browse other questions tagged automotive laser radar or ask your own question.

79
Will radar/lidar still work when every car is equipped with them?