Transfer Function: Trying to understand the Laplace analysis of this circuit

I am trying to do the transfer function of this circuit and also trying to understand the frequency domain thing of the Laplace transform. 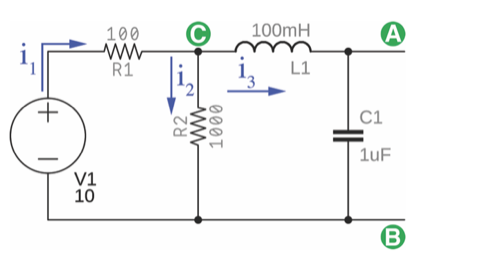 I want to do a transfer function of VA/V1, considering B to be ground.

After doing the node analysis and if my equations are correct, I have ended with this transfer function on the s domain.

These are my problems:

May I suggest that you start by simplifying the 2 resistors into one resistor. I'm suggesting this because it makes the math a lot easier and I think you have a mistake in your final formula. So, the voltage source reduces from 10 volts to 9.09 volts in series with a resistance of 90.90 ohms due to standard circuit theorums.

This then has a standard formula: -

The value for R is the newly recalculated value of 90.9 ohms. To offer a little more help, \$\omega_n\$ is the natural resonant frequency of the filter and \$\zeta\$ is called the damping ratio (also equal to the reciprocal of 2Q).

Now if you want to see what this looks like you can use this on-line calculator and plug-in the values: - 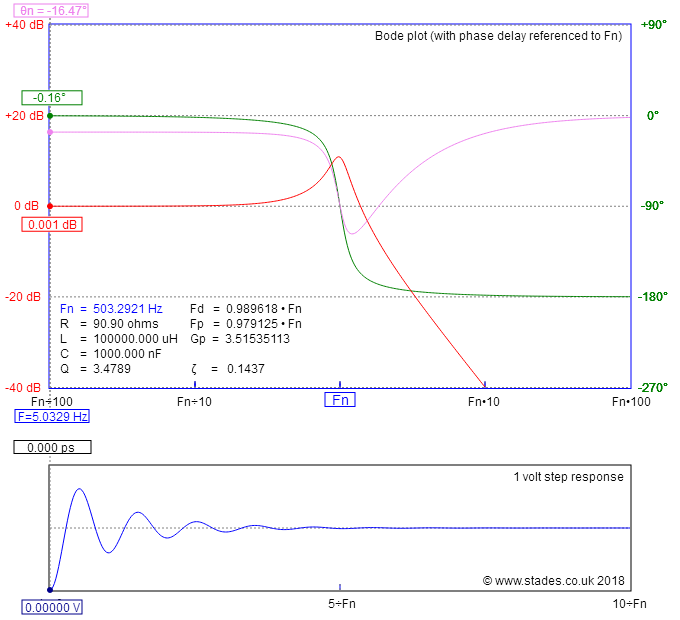 Resonance occurs at about 503 Hz and there is a peak in the response of about 11 dB. Circuit Q is about 3.5.

But don't forget that there is an overall attenuation (due to me simplying the two resistors into one resistor) so the formulas are multiplied by 0.909.

I haven't used your equations because I can see that there is an error in the final formula you derived.

The easiest way to determine this transfer function is to use the fast analytical circuits techniques or FACTs. In these techniques, you consider the circuit in different conditions to determine its time constants. This will lead you to a so-called low-entropy format in which you should see gain, poles and zeros if any.

We start with \$s=0\$. Redraw your circuit in which the inductor is replaced by a short circuit (its impedance is \$sL_2\$ which reduces to 0) while the capacitor is open-circuited (its impedance is \$\frac{1}{sC_1}\$ and is infinite at dc). The circuit looks likes this: 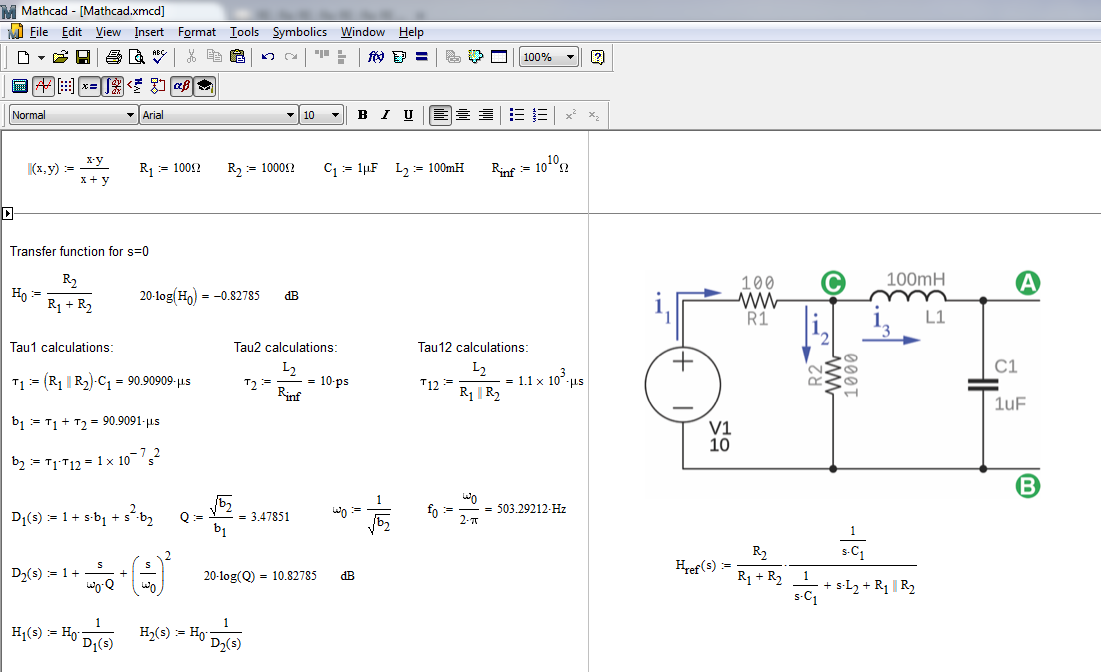 Now, you can determine the same expression using the classical brute-force approach with a Thévenin-equivalent model. Nothing wrong here but a) it is likely to be a complicated exercise b) you may make mistakes - I would : ) and c) you will have to inject more energy to get the canonical form I gave. With this form, you have the resonant frequency \f_0\$ set to 503.3 Hz, a dc gain of -0.83 dB and a peaking of 10.8 dB. This is what the below shot confirms:

The FACTs have lead you there straight away to the compact form you need without writing a single line of algebra, just going through simple sketches that you inspect. If you made a mistake, just fix the guilty drawing and update the time constant. If you are solving transfer functions whether you have passive or active sources, the FACTs cannot be beaten!

Not the answer you're looking for? Browse other questions tagged circuit-analysis transfer-function laplace-transform or ask your own question.