I want to simulate a simple encoder wheel with two buttons (one for up and one for down). The output of the encoder is as follows:

I want to accomplish this without the use of a micro. I have a solution in mind but it would require 3 555 timers to generate the wave form (one to create A pulse, one for delay time on B pulse and third for the B pulse). I am thinking 50 to 100 ms periods would be sufficient. Also, the waveform does not HAVE to repeat while a button is held down. So, the button CAN be repeatedly pressed to simulate a full rotation as opposed to being held down.

Anyone have an improvement on my 3 555s? It just seems so wasteful and I am sure there is likely a more elegant approach. 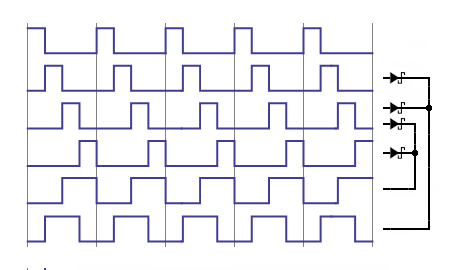 The BAT54CW is a double Schottky diode with common cathode, so you'll need only two of them. They also only drop 320 mV maximum at 1 mA, so are suitable for logic powered by 3.3 V or higher.

Instead of the diodes you can of course use real OR gates.

Pushing the buttons should cause the output sequence to advance forward or backward one step. If swapping a button causes the output sequence to advance in the wrong direction, switch which side of the '74 gets the inverting output of the other. Note also that it's possible that there may be some brief glitches on the outputs when a button is pushed; use of deglitching caps should be able to prevent problems, though.

Not the answer you're looking for? Browse other questions tagged encoder or ask your own question.