What is the difference between the circuits?

I added both circuits. The LED (D1) is used as an example of a load. 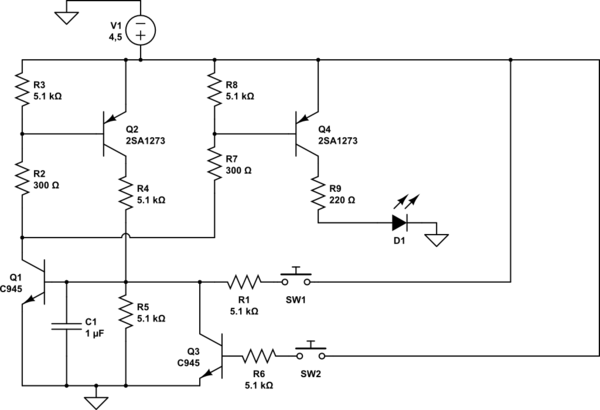 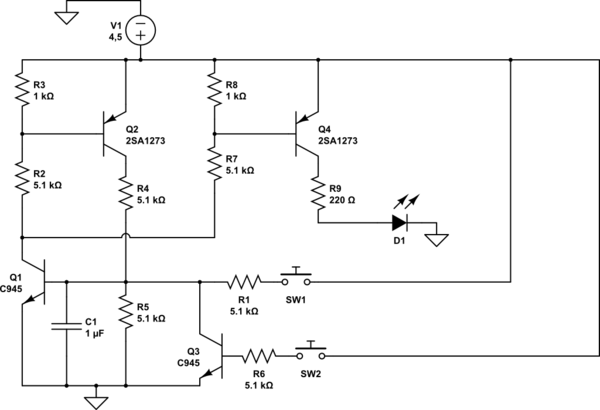 Instead of just poking at random values and asking what difference they make, stop and actually think about the circuit. Once you understand what each part does, you'll be able to find acceptable values for them yourself.

Q1 and Q2 are arranged with positive feedback so that they have two stable operating points. When Q1 is off, Q2 is off, which then does not try to turn on Q1.

When SW2 is pressed, it turns on Q3. That shorts the base of Q1 to ground, turning it off. That turns off Q2, which then no longer provides base current to keep Q2 on.

So now you should be able to see for yourself what a good range of values for the resistors are.

First, let's see how much current Q1 needs to sink when on. You haven't provided a datasheet for the 2SA1273, so we'll arbitrarily assume they can be counted on to have a gain of at least 30.

The main job of Q1 is to turn on Q4, so it can power the load. The load is a unspecified LED emitting visible light. The lowest voltage drop for such a LED would be 1.8 V for a red one. Figure another 200 mV for Q4 when saturated, leaving 2.5 V across R9. That results in 11.4 mA, so we'll round that up to say the load won't exceed 12 mA.

With a gain of 30, that means the base current of Q4 must be at least 400 µA. The purpose of R8 is to make sure Q4 is off when not being explicitly driven. Lower values turn it off faster. Since you haven't specified speed, there is no way to say whether 5.1 kΩ or 1 kΩ is more appropriate. If speed was no issue, I'd probably use 10 kΩ. Let's use the worst case for the rest of the circuit, which is 1 kΩ. Figure the B-E drop of Q4 is 700 mV when on, so R8 draws another 700 µA. That means a total of at least 1.1 mA must flow thru R7 to turn on the load.

Let's say we used 2.0 kΩ for R7, so the current thru it would be 1.8 mA. That's the main current that Q1 needs to be able to sink when on. From inspection, we can see that the current to drive Q2 can be much smaller than that. Let's therefore work backwards requiring Q1 to sink 2.0 mA.

Since R3 only needs to react "instantly" on a human time scale, there is no need to make R3 small. I would use 10 kΩ. With R3 of 10 kΩ, it requires 70 µA to keep Q2 on. That plus the 100 µA we already decided for the Q2 base current means the current thru R2 has be to at least 170 µA. That means it must be no more than 21 kΩ. I'd probably just use another 10 kΩ resistor. 300 Ω is excessively low, and violates the current requirements we assumed for Q1. Even 5.1 kΩ is unnecessarily low.

You now say that you want to support a final load current of 220 mA, and that the gain of Q4 is 185. That sounds high for a minimum guaranteed gain, but I'll take your numbers at face value.

Now you have to go back and update the min required current sink value for Q1, and ripple thru all the downstream calculations from that as shown above.

The circuit basically consists of 3 sections:

Changing R2, R3 will make the latch work or not. I think that for both sets of resistor values the latch will work. I prefer the R2 = 5.1 kohm, R3 = 1 kohm situation because when R2 = 300 ohms a lot of current flows through the base of Q2 and also into Q1. That large current isn't really needed.

For Q4 I think it depends on the load, how much current the load needs. If Q4 can enter saturation mode when R7 = 5.1 kohm, R8 = 1 kohm then I would choose those values. Making R7 = 300 ohm makes about 12 mA flow when Q4 is on. For a small transistor (Ic max = 200 mA) like the 2SA1237 that's only needed if you want to operate it well into saturation with a large collector current like 100 mA or more. But then you're near the edge of what this PNP can do.

Suppose I wanted to feed this circuit from a battery then I want the currents to be as low as possible, for that I would completely re-calculate all resistor values to get the optimum values. (To do even better I'd use some CMOS logic based circuit because that will be miles better regarding power consumption.)

Not the answer you're looking for? Browse other questions tagged circuit-design latch trigger or ask your own question.

7
What is wrong with my D flip-flop toggle switch?
5
Why won't my 2 x NPN circuit latch?
0
Create Circuit to come ON when momentary contact is RELEASED, not pushed
0
Not gate with 3 LEDS attached after NPN transistor
0
Designing an Over-Current Protection Circuit with Delayed Reset
1
New to circuits: Creating a toggle button in Logisim using Latch
0
Switch that triggers at 2V
0
Button is giving me the same voltage when pressed or released
0
switching off 555 timer with trigger button
1
555 soft latch triggers when voltage applied and turned off