I'm having issues tuning a PID controller - specifically the I-term. First - here's a little info about my system:

I'm heating a coil (R ~= 1.8 Ohms) to 750°F. My power delivery system is working fine. I'm applying a maximum of 12V to the coil, so there's about 7A going through the heater. I'm monitoring temperature with a k-type thermocouple. I've double-checked with another thermocouple and DMM to make sure my microcontroller is reading the right temperature data. It is. If you have clarifying questions about the system hardware I'd be happy to answer but I'm pretty sure my issue is coming from my tuning method.

I set my I-term and D-term gain to zero and slowly increased my P-term gain until I got stable oscillations: 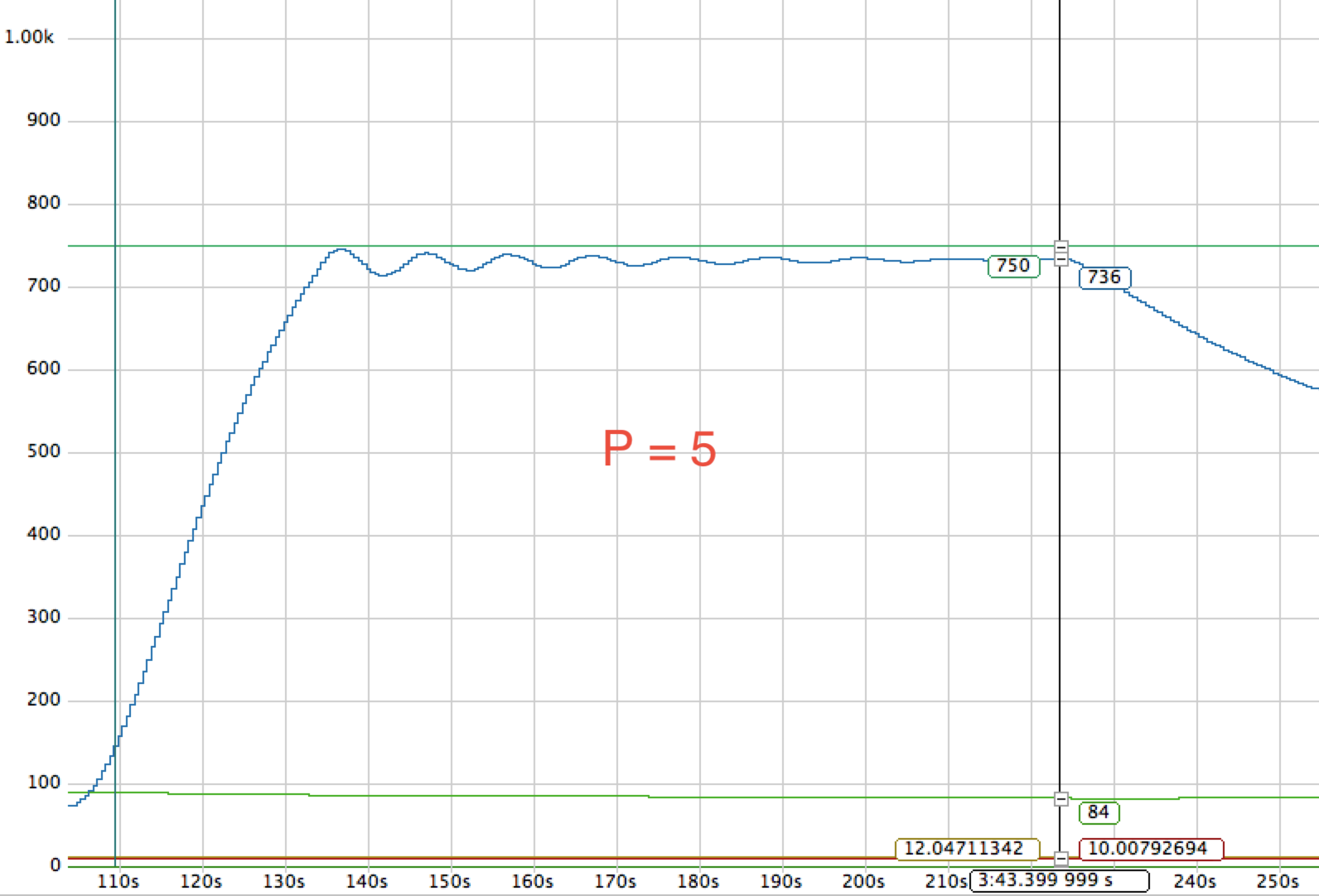 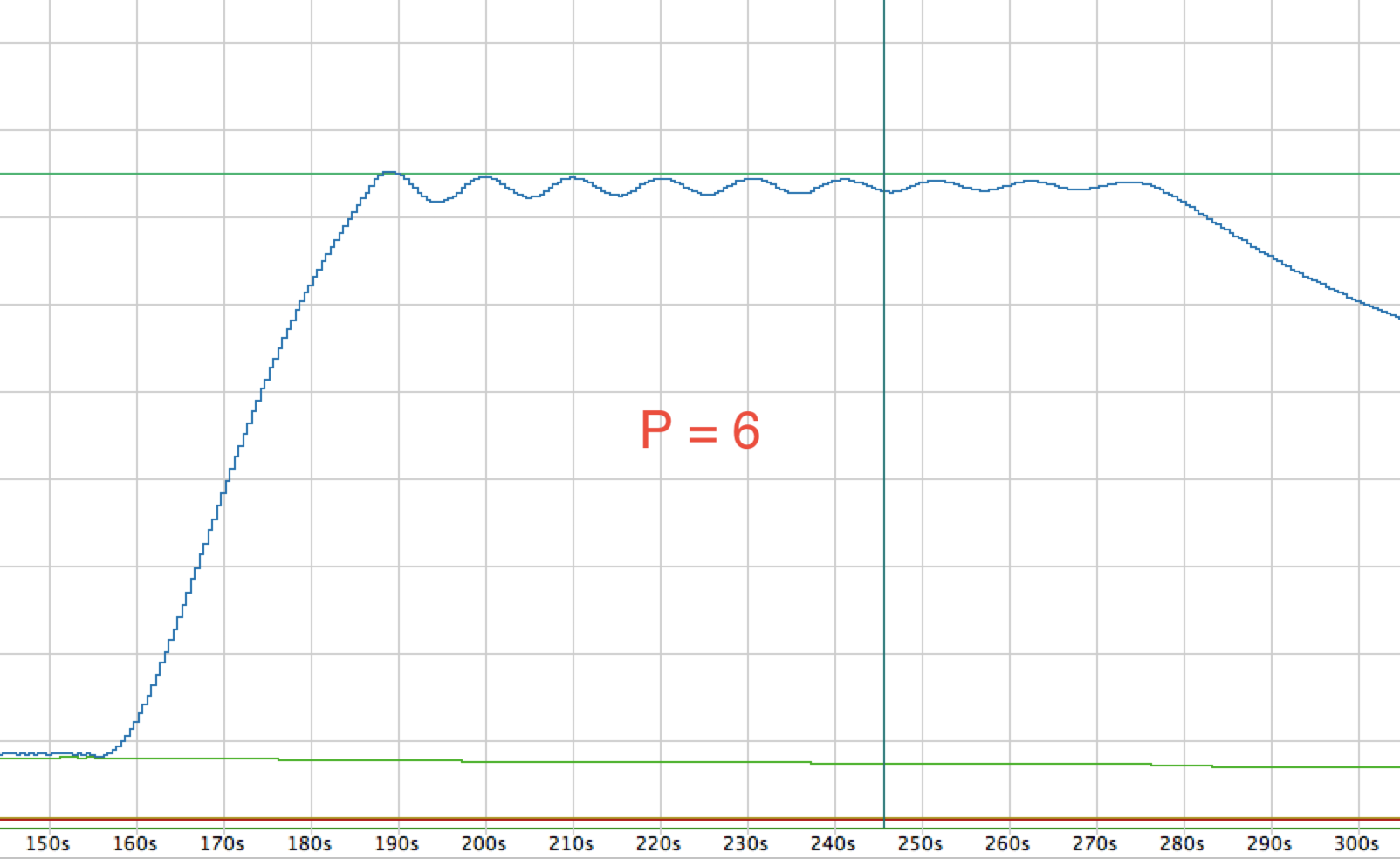 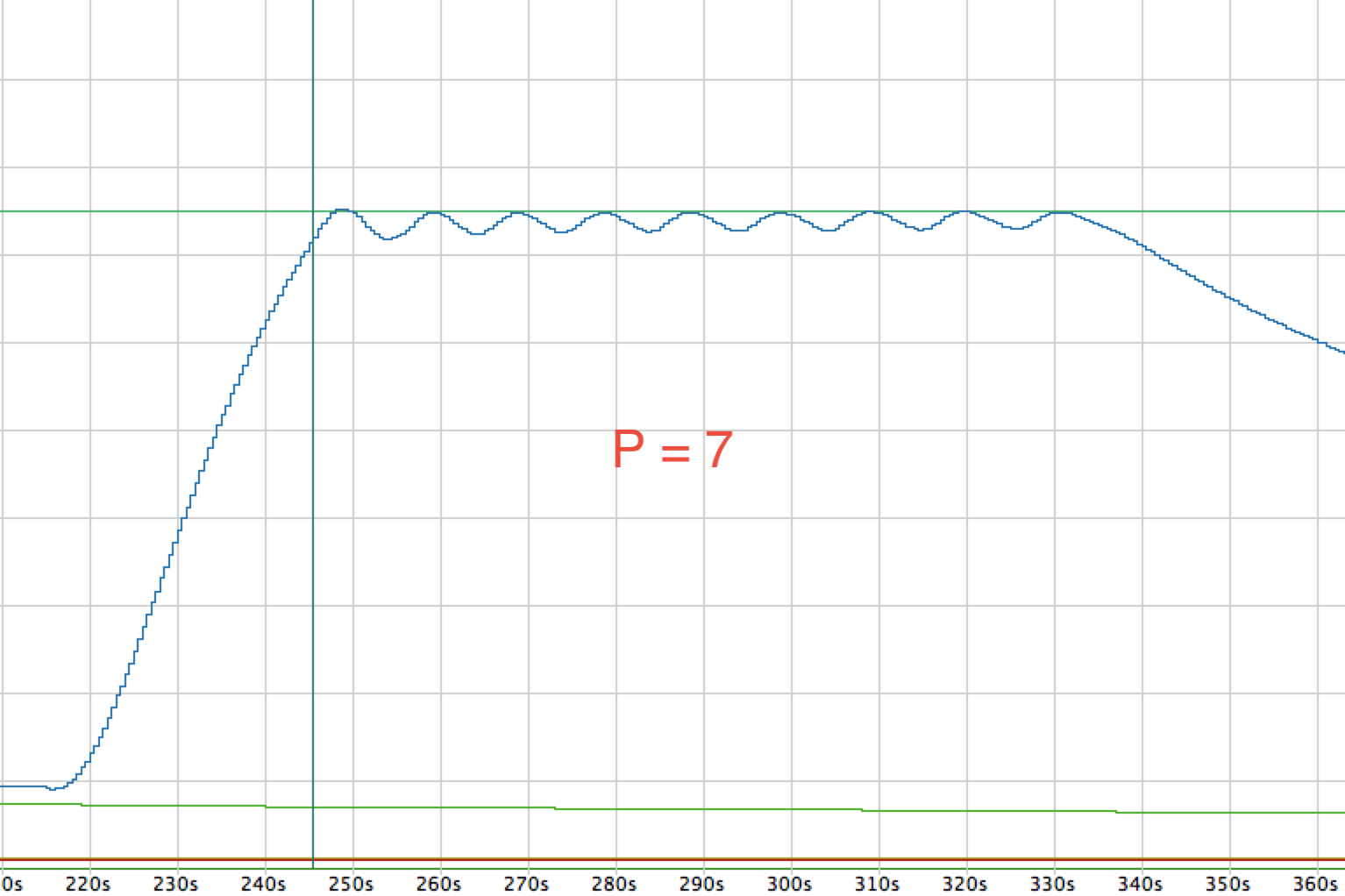 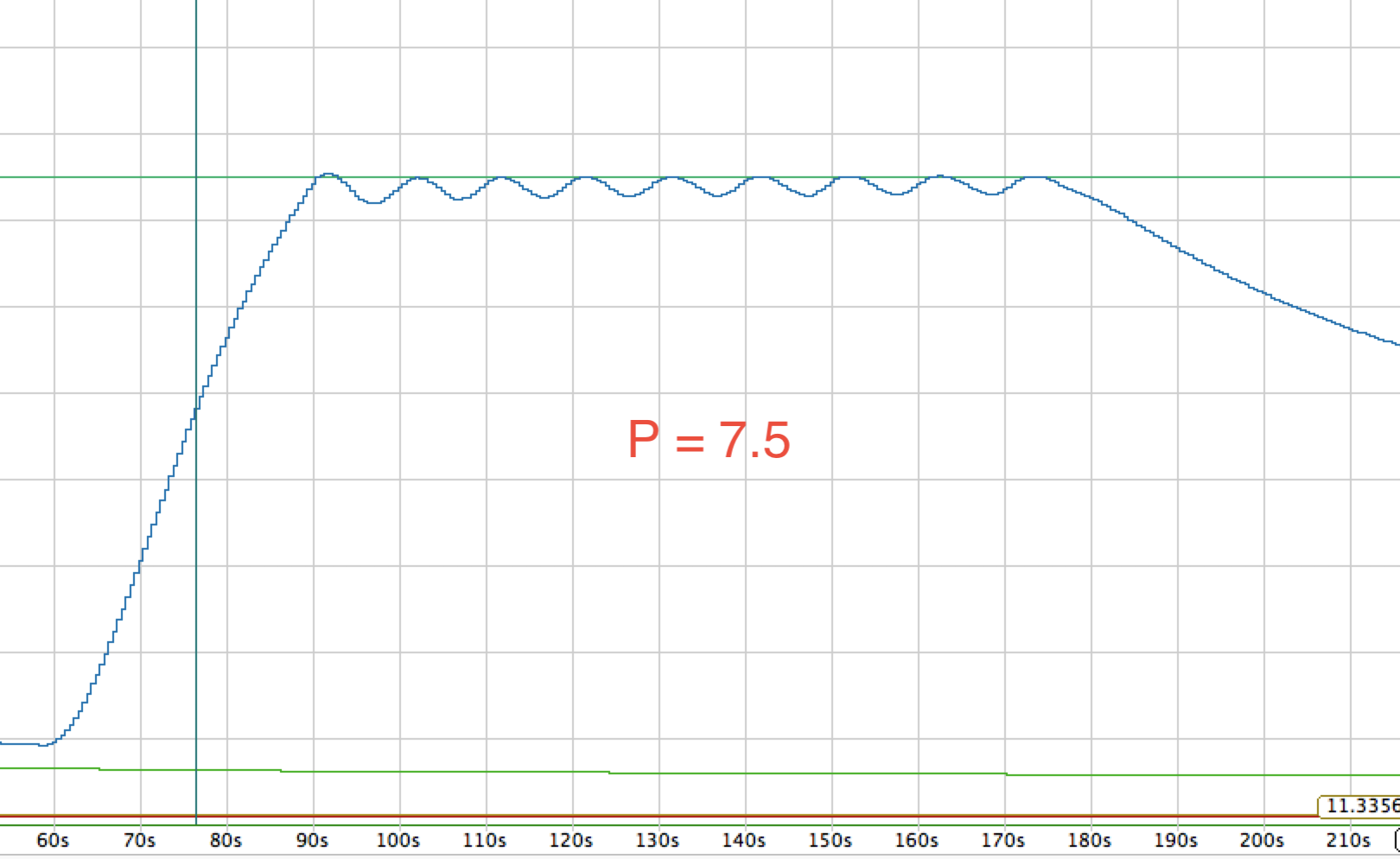 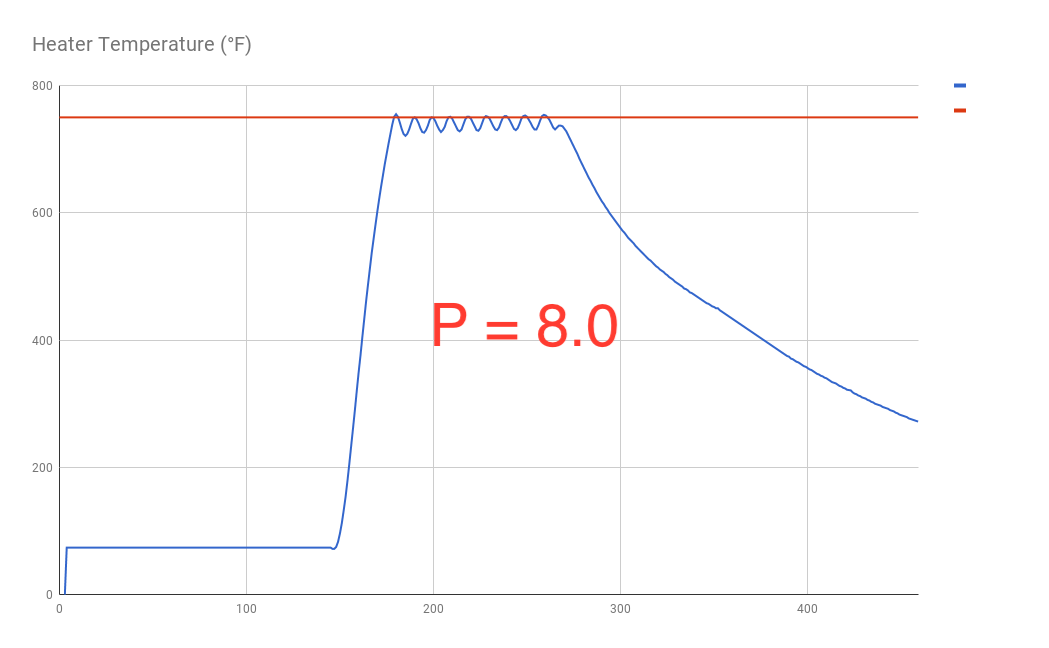 After achieving stable oscillations and choosing a P-term gain of 8.0, I calculated my new P-term and I-term values per the equations in the tutorials (P Gain = 3.63, I Gain = 0.42): 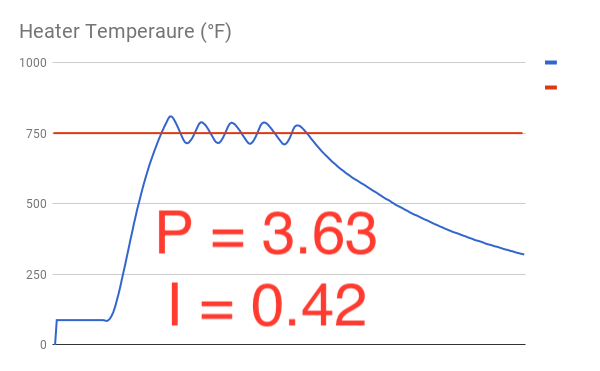 As you can see, although the oscillations are much more centered, they have not diminished as they do in the first tutorial. When I calculate and implement the D-term gain, I still get unsatisfactory behavior: 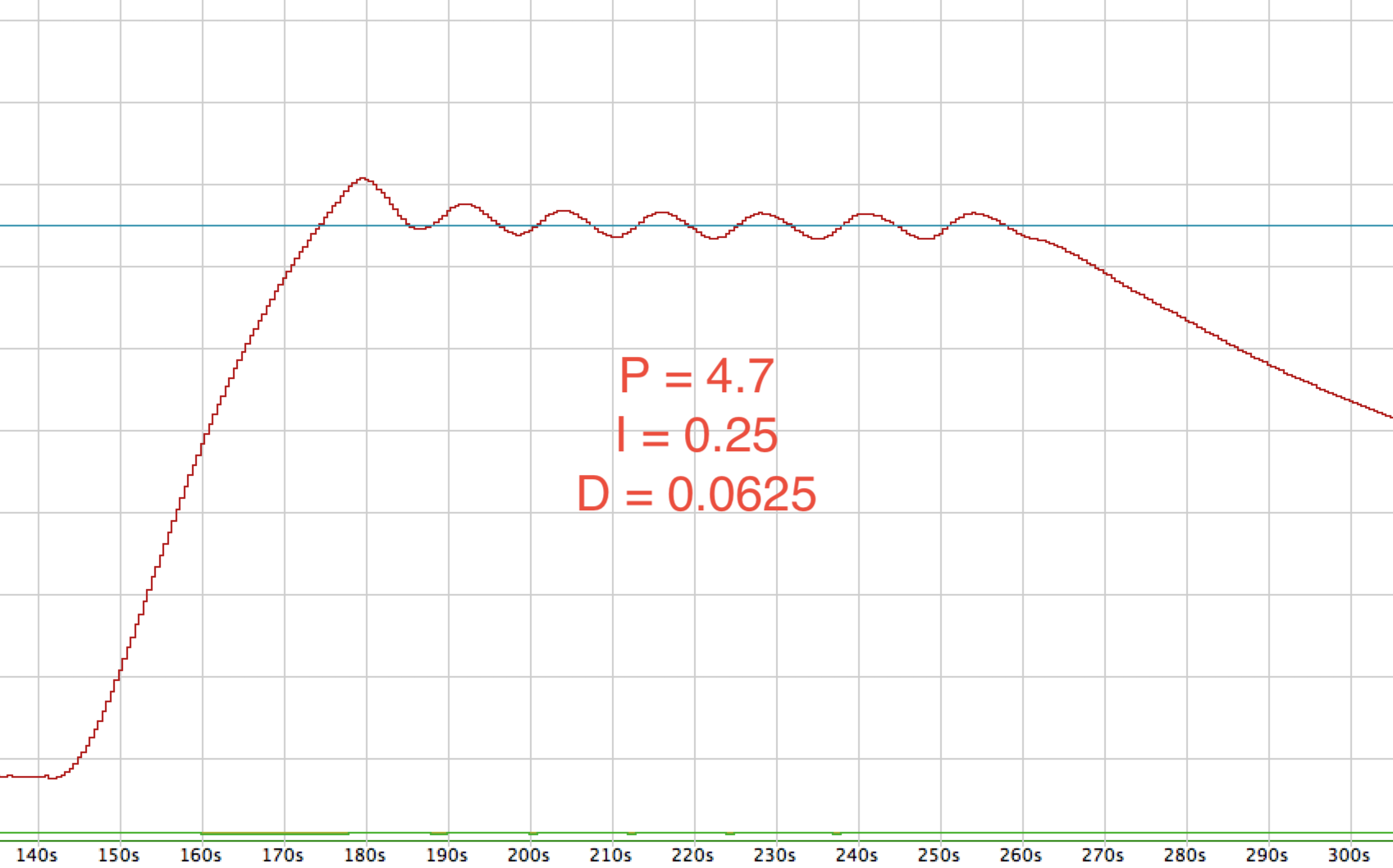 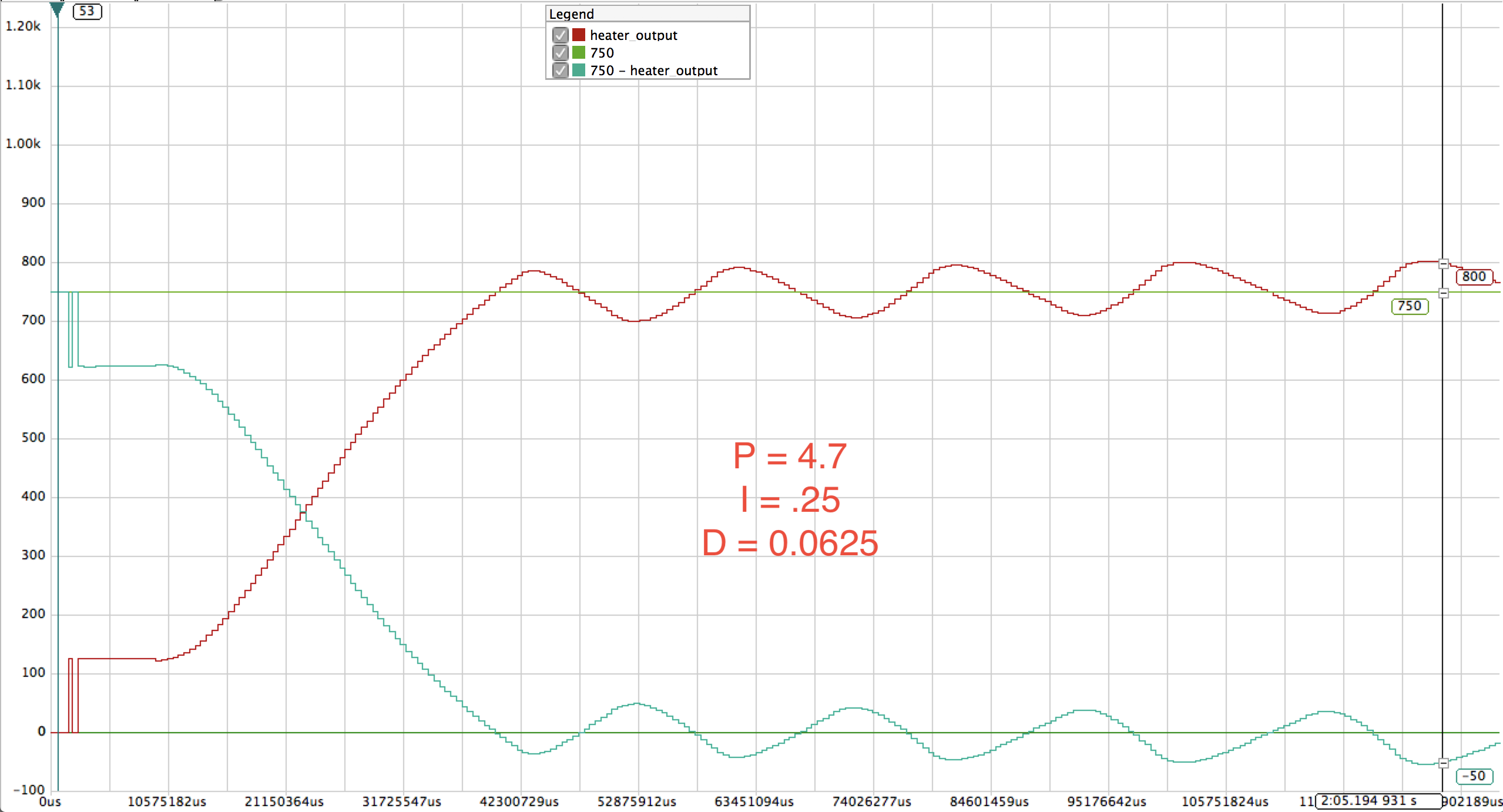 Update: See the update 3 at the bottom. After re-reading the answer I realized that some of my statements below are not applicable to thermal systems.

One thing strikes immediately as suspicious, on all P-only graphs the oscillation is happening under setpoint. That is not how P term works. In order to oscillate it must cross setpoint.

So, figure out this part, and I think it will go well with the rest.

Update 1: most important here are thermal inertia, timing and continuous linear control action. For example, if output power cuts-off at some low value you can see oscillations under setpoint.

Regardless of that, in a context of PID tuning the "stable oscillations" that you need to achieve as first tuning step should go way beyond setpoint.

Also, before introducing I-term make sure you added anti-windup measures. This is extremely important in thermal control systems due to inherently slow response.

Update 2: I just recalled this article, which I used to write my own auto-tuning library long time ago. It did not work well for me because my mechanical system had strict acceleration restrictions. But I think it should be very good for a system with slow response, such as yours.

Update 3: There is inherent complexity to P-term response due to the nature of thermal systems. Unlike typical servo applications the downward slope cannot be controlled by reversing control command, it happens naturally and depends on environment conditions. The consequences are:

One of the tricks of thermal control systems is to closely match power plant to the process. Meaning - if your heater is too powerful it will be harder to tune.

If you have very fine control over power output your proportional band can be quite narrow, meaning P-term only applies to the limited range near setpoint and works as On/Off switch otherwise.

Another trick is to always change only one term at a time, but make big changes (like double or halve the term) at least initially. Thermal systems do not respond to small changes as servos do.

What I think is going wrong in that final graph is that your I term has a gigantic amount of accumulated error by the time you get to the setpoint, and the oscillations not settling is due to that integrated error from the initial rise having no way of being resolved. If you wrote the PID controller from scratch, I would try clearing the integrated error after a few oscillations, or decreasing I and increasing P/D. You could also try using just a pure P/D controller.

It would also help if you could post a graph that included the error term, if you have any way of generating that.

Those oscillations are some other nature. The Kp=8 is not nearly critical. You should make a lower setpoint, then increase P-Gain to get stable oscillations, and they are huge.

Post a trend of process value (temperature) and manipulated value (output) vs time. Show your setup - how do you control the heater?

Keep I & D at zero, now tune your P term so that it doesn't quite reach setpoint (imagine it reaching setpoint at infinity). Now, add in a tiny bit of I to speed up the rate at which it reaches setpoint. I've never needed to use D, it's very susceptible to noise on the input measurement. Your graphs show oscillation because P is too high.

Not the answer you're looking for? Browse other questions tagged embedded control-system pid-controller or ask your own question.

7
Any open tool for graph plotting for determining PID tuning parameters?
3
Simulating PID controller in Matlab
3
PID-controller and Ziegler-Nichols Method: How to get oscillation period?
0
designing PID controller using Ziegler Nichols algorithm
6
PID : What does « ultimate gain Ku » in Ziegler–Nichols method mean?
3
PID tuning without plant model
0
PID Tuning Question
1
How do I tune this PID for my coffee machine?