Should I use a separate power supply or separate grounds in this scenario?

Regarding one of my previous question I decided to implement the follwing wiring scheme for a scenario. 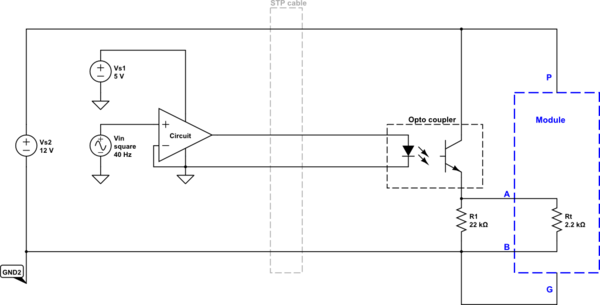 The scenario is to trigger remote devices(module shown in blue box above) through their hardware trigger inputs simultaneously from a single trigger source which has a timer output. So basically the 0/5V pulse-train at around 40Hz will trigger many devices simultaneously. The maximum distance between the trigger source and the device is 60 meters. Total number of devices is three. In this case the Circuit above is just a buffer.

For the sake of simplicity I only made a diagram above for one device/module. The device is this module. As you see above an STP cable will both provide power and trigger to the module. A photodarlington optocoupler such as 4N32 will be placed right before the trigger input of the module to isolate from the input signal ground. P is the power and G is the power ground terminal of the module. A and B are trigger terminals.

Vs1 is 5V and powering the analog circuit on the left so that Vs1, Vin and Circuit shares the same ground call it GND(triangle symbol). On the very left however a separate power supply Vs2 is used to power both the output of the optocoupler and the module. So I called the ground of Vs2 as GND2 in the schematics to indicate that GND and GND2 are not connected/isolated.

The part I'm stuck at is on the right side the module and the optocoupler share the same ground because they are powered by the same power supply Vs2.

I cannot make a further judgement at this point. Should I use a separate power supply to power the module? Or should I use two separate return ground wires for the module and the optocoupler?

Is this scheme better(one ground for each)?: 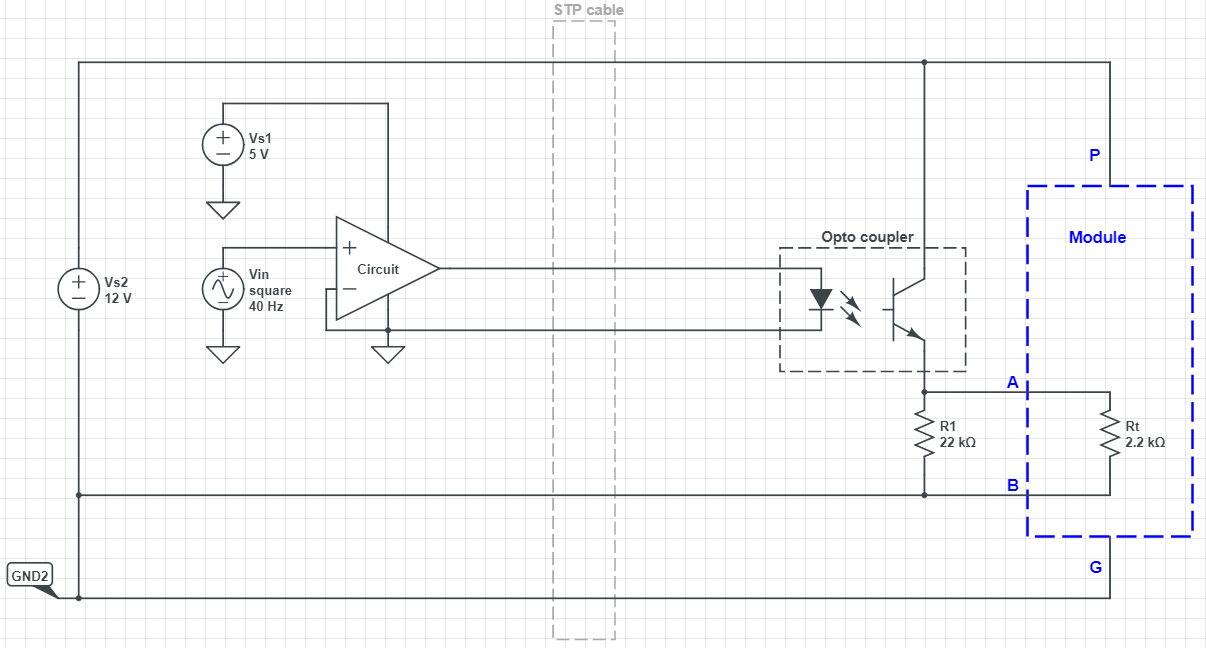 It is not clear for me what is your goal. I do not see why do you need an opto-coupler. You could use a transistor as well. In both schematic the circuit operation would not change.

For real galvanic isolation - for safety or to reduce conducted noise - you need to have separate grounds and supplies, which could float compared to the other one. There should be no connection across the isolation barrier except the isolator device (opto-coupler, transformer, isolator device). For any other purpose you could use a single transistor.

Not the answer you're looking for? Browse other questions tagged analog wiring pulse trigger or ask your own question.

6
Connecting arduino and separate power supply grounds
0
External Power Supply Grounding Scheme
2
Splitted Power supply oscillating
0
Negative Power Supply for Op Amp
1
Hardware triggering multiple devices from a single source for long distances
0
Questions about grounding points for an analog signal transmission
0
Is there a problem connecting PSU grounds to earth for an isolated signal chain in this scenario?
0
Can this analog speed regulation for a DC motor be used for this scenario?