Odd op-amp circuit with a potentiometer

Im supposed to calculate the gain and impedance (in & out) of the inverting amplifier below. I also need to simulate the circuit with Ltspice using different \$V_s\$ values. 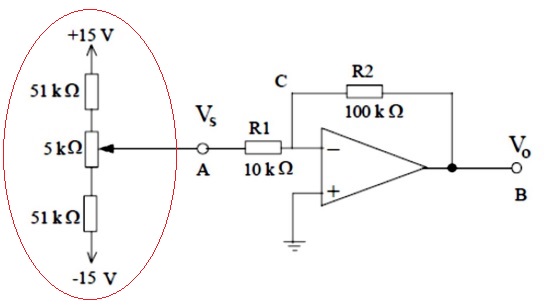 Im aware that the gain is calculated as \$\cfrac{V_o}{V_s}=-\cfrac{R_2}{R_1}\$. The problem with calculations and simulating is the circuit inside the red ellipse. I suppose the voltages +15, and -15 are for the amp (usage voltages).
But how to take that part into account calculating voltage \$V_s\$. Im not quite sure how the potentiometer in this case (or in overall) works. Also if possible, is there some equivalent circuit for understanding and simulating on Ltspice?

Any help will be appreciated.

M.P..... Now - after some answers and some related comments - I think, it is clear to you that the resistive chain (at left) does NOT influence the ratio (gain) Vo/Vs.

However, if you want - in addition - to find the value of Vs as a function of the potentiometer position, you simply have the problem of a loaded voltage divider, which is relatively simple to solve. The load is simply the 10k resistor because in this caculation, you can assume the inverting opamp input to be grounded.

Simulation: I am not familiar with LTSpice, however in the PSpice program you can do the following (perhaps something similar works in LTSpice):

(the form of the brackets is important in PSpice).

+15V and -15V are for the signal you are generating. Those three resistors form a variable voltage divider. The output of that goes to the opamp, and is multiplied by the gain you have calculated.

Figure out the maximum and minimum voltage you can get out of the voltage divider. From that you can see if the +-15V supply would be adequate to power the opamp. (Calculate output voltage of the opamp using max and min values from the divider and the gain.)

Hints only since this seems to be homework.

Not the answer you're looking for? Browse other questions tagged operational-amplifier ltspice or ask your own question.