Please forgive me for crossing wires on top of IC's but I wanted to get things done, yet still have no luck. Let me explain the circuit.

The sub-circuit contains a radio module which won't work at 5V (which is why I included 3V on the connector). It also contains a microcontroller (AT89C4051) in which the three lines (DI, DO, and ICLK) are connected to its port pins.

Also, on the sub-circuit, I included LEDs for debugging. I setup my microcontroller program so no LED goes on until ICLK becomes low then high again.

So I did a loopback test of each pin. I plugged this circuit in my computer and tested each line one-by-one with Quick Basic. Yes that program comes in so handy, all I had to do was run these instructions:

So this particular circuit works even with the parallel port connector metal shield removed.

As soon as I plug it into the PC port with no external power, some LEDs glow dimly yet I never asked for this.

Once I apply the 5V power after, sometimes the circuit works and sometimes it doesn't. Sometimes a light goes on right away.

So the only thing I could guess is the parallel port producing interference?

The circuits are very close to the computer.

This tempts me to ground every unused input of the parallel port in an attempt to cut interference but then again should I?

The only other option for me is to ditch this circuit and make one with a few buttons and press them a million times to run tests which is what I don't want to do.

I setup my port on the PC to AT compatible (SPP mode).

If not that, is my PC completely guilty? 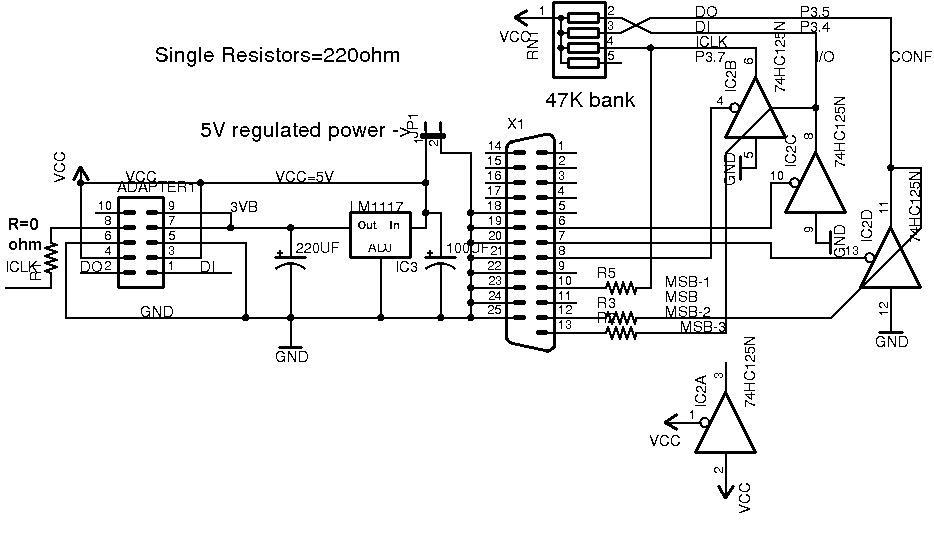 As soon as I plug it into the PC port with no external power, some LEDs glow dimly yet I never asked for this.

This is usually "phantom power": some of the data lines will be high at startup. This puts 5V through the protection diodes on the pins of the ICs through to VCC, powering the circuit. Since it's been through a diode it'll be less than 5V, resulting in dim LEDs.

The circuits are very close to the computer.

You could rule out direct EMI with an extension cable. But generally the port will only generate interference while switching.

Not the answer you're looking for? Browse other questions tagged microcontroller parallel emc interference tri-state or ask your own question.

8
Programming a parallel port as digital I/O
0
Suppressing interference in a pressure sensor circuit
3
Humbucker-style microphone interference cancelling
0
Is it better on two closely connected microcontrollers to send nibbles with an ack or a byte with a delay for an ack?
1
Byte-Banging 2 8051's using port addresses
2
Waves on raspberrypi camera feed, Ground loops? electrical interference?
1
WS2812b interference and bootup behavior