Why are the E-series numbers different from the powers of 10?

The E-series numbers are the common values used in resistors. For example, the E6 values are:

The same happens in other E-series values. For example, the powers of \$10^\frac{1}{12}\$ rounded to 2 significant figures are:

While the E12 values are:

So why are the E-series of preferred numbers different from the powers of 10 rounded to the closest number?

I've really enjoyed your question and definitely upped it. Your question made me think about and do some additional reading on the topic. And I really appreciate what I've learned from the process and that you stimulated that process for me. Thanks!

I'm not going to go back to the Babylonian days here. (Probably, the whole concept does go back that far, and further.) But I'll start about a century ago.

Charles Renard proposed a few specific ways of arranging numbers to divide (decimal) intervals. He focused on dividing a decade range in 5, 10, 20, and 40 steps, where the logarithm of each step value would form an arithmetic series. And these became known as R5, R10, R20, and R40. Of course, there are many other choices one could make. But those were his, at the time.

Meanwhile, after WW II, there was a strong push towards standardizing manufactured parts. So various groups, at various times, worked pretty hard on "rationalizing" standard values to aid manufacturing, instrumentation, the numbers of teeth on gears, and ... well, most everything.

I haven't yet found any specifics about the precise algorithm applied some decades ago for the question you asked. The idea of "rationalizing numbers" isn't a hard idea, but the exact process that was applied is far beyond my ability to be certain of reverse-engineering now. And I was not able to uncover an historical document that disclosed it. Some of the elements can only be brought to light by possessing the full documents related to their final choices. And I haven't found those documents, yet. But I'm confident I was able to work out what must have been their process for the resistor question.

One of the things mentioned in NBS Pub. 990, is the fact that differences and sums of preferred numbers should not, themselves, be preferred numbers. This is in an attempt to provide coverage for other values in the decade range when explicit values fail to meet a need (by using two values in a sum or difference arrangement.)

Keep in mind that this coverage question is more important for the series such as E3 and E6 and is almost not at all important for E24, for example, which directly contains many intervening values. With that, in mind, the following is my thinking about their thinking. Perhaps it won't stray too far from the actual reasoning for their process of "rationalizing" values and making a final decision about the preferred values they ultimately chose to use.

There is a very nice, simple sheet to look that which summaries the E-series values for resistors: Vishay E-Series.

Here is my image of the two-digit E-series values which includes the calculated values, as well: 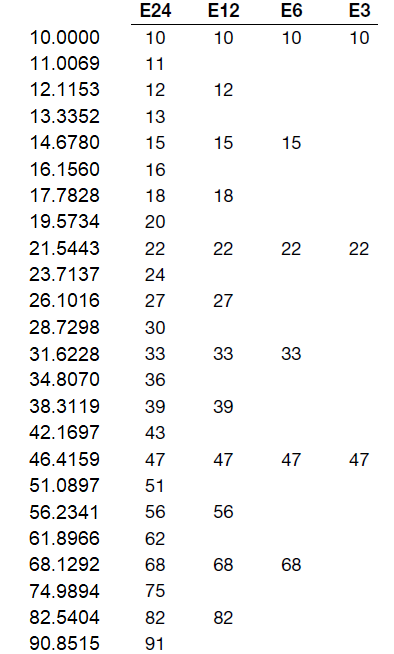 Here is my process, given the above, which I believe may be at least similar to the reasoning used many years ago:

I think you'll agree this process is rational and leads directly to what we see, today.

(I didn't go through the logic applied to all the 3-digit E-series values: E48, E96, and E192. But I think there is enough above already and I believe it will pan out similarly. If you find anything differently, I'll be glad to look it over, too.)

The final rationalization process, towards preferred numbers, then looks something like this: 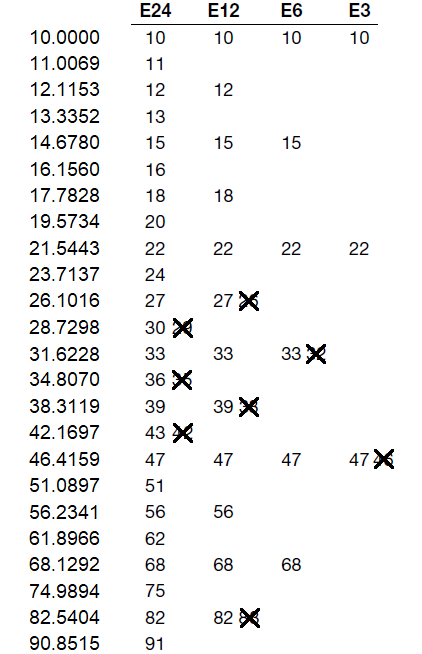 Above, you can see the steps involved and where the changes are made and how they are then carried forward (reading right to left, of course.)

Interesting question that caused me to dig in and learn some of the history of the problems and the reasoning behind preferred numbers which I hadn't as fully apprehended before.

Not the answer you're looking for? Browse other questions tagged resistors components history or ask your own question.

171
What is the reason that the value "47" is so popular in electrical engineering?
20
Why does `buck` mean `step-down`?
3
How to figure out what resistors are in the E12 and E24 series?
1
Is there a practical use for the Fibonacci sequence or similar fractal/sequence in Electrical Engineering?
1
How to design low pass filter using Sallen-Key architecture?

8
Why are the "common" resistors and capacitors rated the way they are?
79
Why are circuitboards traditionally green?
1
Why are these batteries I bought from Costco called "Battery Piles"?
4
Why are the resistors all different?
5
Are there gaps in the 2% resistor standard values?
0
A question about E12 series resistors
2
Why is it "Vactrols" are not commonly used?
7
What (if anything) are the standards for "generic" part numbers?
0
Why are there convex and concave resistor arrays?