How to calculate this current limit circuit?

How to calculate this current limit circuit 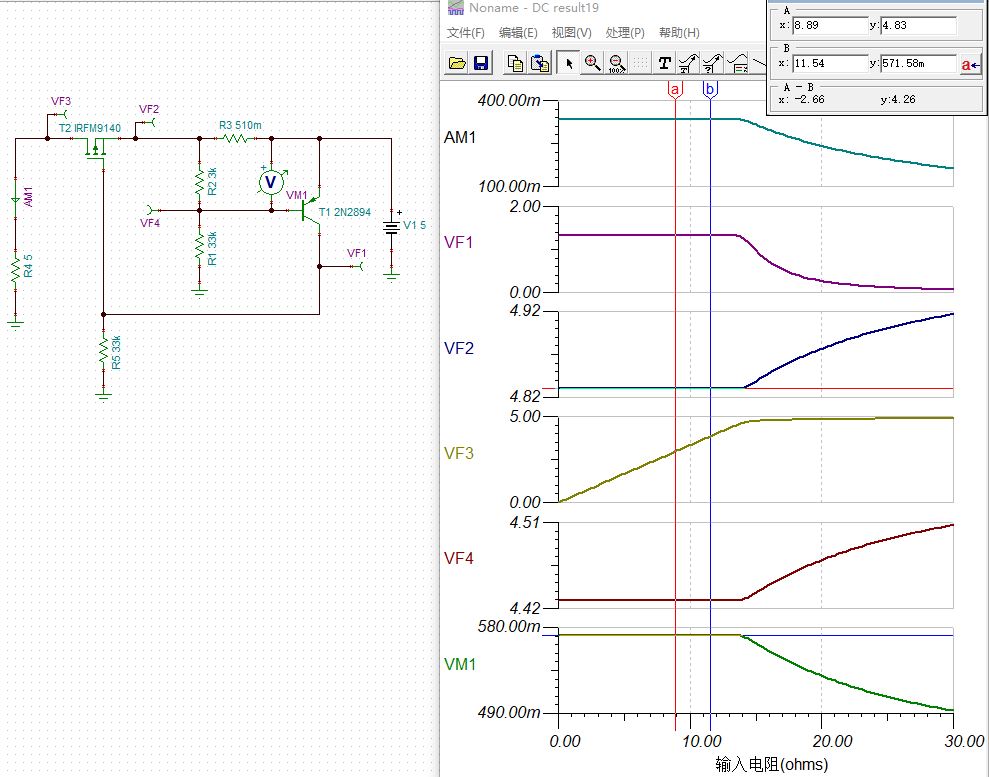 This is a current limit, can anybody give me some instructions about how to calculate the limited current?

My calculation is as follows:

It seems right as the simulation in pic1, but when I change the Input voltage of V1, the current limitation seems changes as another simulation(pic2) 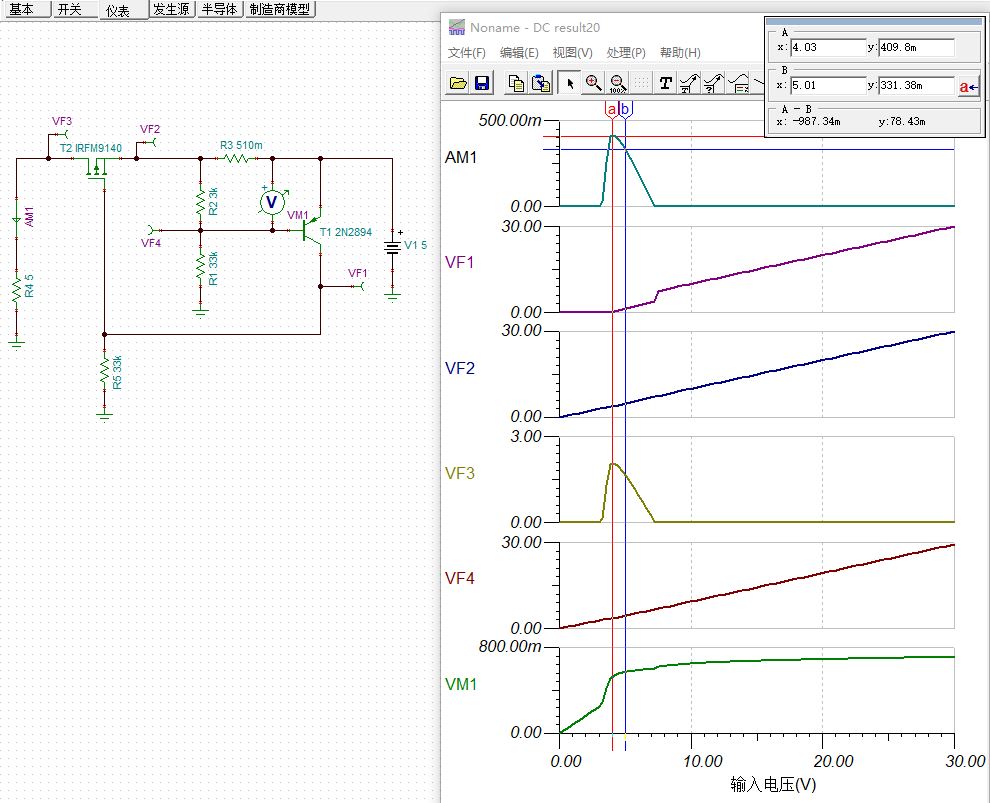 Can someone give some formula about how to calculate the current limitation vs different voltage input? 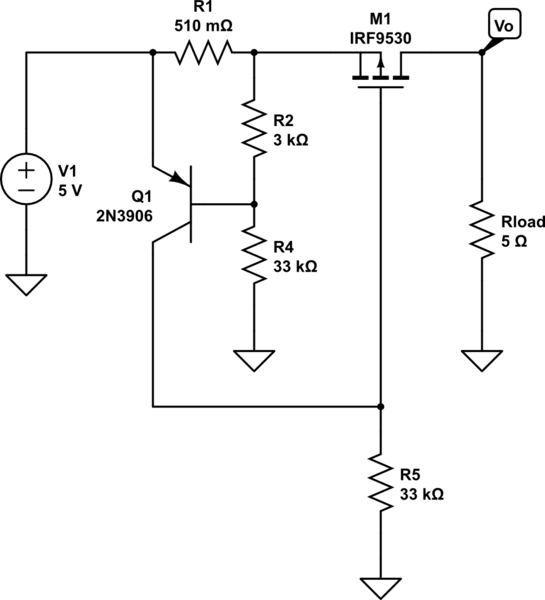 I have searched many other similar questions in the StackExchange. Interesting is I found a very similar schematic as follow: 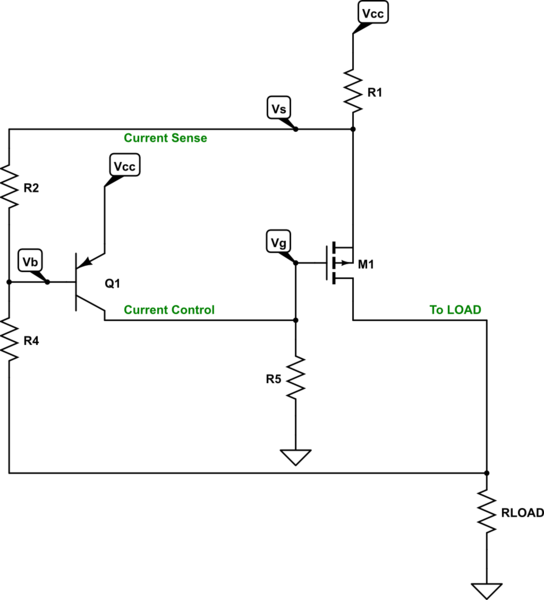 This schematic is coming from Jonk's another answer

How can I calculate knee current for this foldback current limiter

Now I will ask what's the difference between these two schematics? 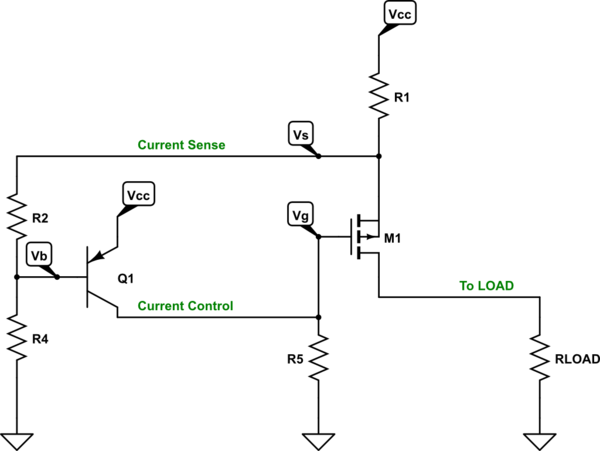 Just a small re-arrangement that may make things just a little easier to see.

This means that \$Q_1\$ has the job of monitoring the current sense line and sourcing current that \$R_5\$ will sink, as needed. In active mode, \$Q_1\$'s collector acts like a current source. (Changing over to a voltage source when \$Q_1\$ is saturated.) Such an arrangement is a really good match for sinking current into \$R_5\$.

The current sense line draws a small amount of current. For the purposes of a simple analysis, the simpler presumption is that it draws no current at all. (A designer would make sure that the current sense requires far less current than the load.) So this allows us to see \$R_2\$ and \$R_4\$ as a simple voltage divider. (We should also assume that \$Q_1\$'s base doesn't require any current, to keep things simpler.)

The overall equation is then:

For the value of \$V_\text{BE}\$, you should use some value between the limits I mentioned earlier. Probably something near \$600\:\text{mV}\$, given the values in your schematic.

You may notice that nowhere in this conversation did the threshold voltage for the PFET come in. It matters, in the sense that if the PFET requires too much \$\mid V_\text{GS}\mid\$, given your \$V_\text{CC}\$ and the circuit range of behavior, then the whole thing falls. But it's just a matter of selecting a PFET that meets your voltage range and load requirements. It doesn't impact the above calculations much. (Spice would deal with the details, of course.)

First Jonk's answer makes me much better understand this question.

Now I try to answer my updated question.

Not the answer you're looking for? Browse other questions tagged circuit-analysis current-limiting or ask your own question.