I've to implement a wireless communication system. Details are as follows.

Please point me to a proper transceiver module that can be used for the purpose. Don't have prior experience with wireless modules (so, you can assume fine details and then let me know of them), a straight answer is much appreciated.. 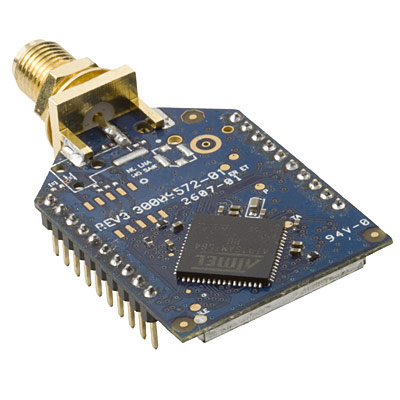 As the name suggests this works in the 900 MHz. The datasheet mentions a LoS range of 3 km, but since you don't have LoS that may be considerably less. The module has an RF connector, though, so you can connect an external high-gain antenna, which, again according to the datasheet, would increase the range to 10 km LoS. Should be enough for your application.

Your link is to an eBay reference. I wouldn't buy from sources like that. For Sri Lanka Digi has a distributor in India, which will probably give you better support. (Many product you buy on eBay you can't get any support for at all.)

While Xbee might be the easier option, but an alternative, with a much lower cost, but requiring some more "work" on application layer to define the communication protocol could be the RFM12B, which sells for about $12 a pair. It has a longer range version called RFM12BP, but I am not certain about it's cost. Jeelab's JeeNode, which can be programmed using Arduino environment (as an option), embeds RFM12B for ISM band short-range communication. The data-rates are not high, and infact lower than Xbees (or other Zigbee implementations).

Do note that ISM band has restrictions around max. transmit power, and max. continuous transmit duration in many countries, and same set of ISM bands are not really globally accepted. For instance, while many people advertise 434MHz as a universal ISM band, there are exceptions.

You didn't mention price range, but if it is not an issue, consider Freewave. They have long range radios (km), and have a simple rs232 (with TTL level option) interface. Take a look at the FGR-115.

For a lower price alternative, the xbee mentioned in another answer, or Digi's XStream.

Not the answer you're looking for? Browse other questions tagged microcontroller rf wireless xbee communication or ask your own question.

2
Selecting a transceiver module for a wireless communication system
6
Wireless Module with over 1.5Km range?