I have a circuit that has a 24V power rail and I put an LED and series resistor on it for power indication. Even at 10mA forward current, over 200mW of power is dissipated, over 90% of it in the series resistor. This is more than many (but not all) SMD resistors can even provide. This seems like a lot of power for a simple LED.

Neon indicators might work at the higher voltage end, but they aren't commonly available in SMD packages and they're bulky, expensive and can have limited life.

I also considered an astable multivibrator to do a low-duty cycle flash to keep average power down, but that needs 4 resistors, 2 capacitors and 2 transistors, or an IC (which would be unlikely to work at 24V) and some passives.

Is there a very simple (low component count, cheap, low-power and low-board-area) way to show power indication in circuits with a rail voltage more than about 10 times the LED \$V_f\$ (say around 15V up to 48V).

Use a different LED. High brightness LEDs should still be plenty bright enough for an indicator at 1-5 mA.

The problem you have is whatever component(s) you use to do this linearly will be dissipating the excess energy as heat.

The only way to perform this more efficiently if you wish to run from a high voltage, and put 20 mA thru the LED is to use some kind of switching device but that goes against one or more of the simple, cheap and low component count requirements.

Use multiple resistors in series!

At the cost of a little board space, you can stick with standard-sized parts. If you use the same value resistors the power dissipation will be (approximately) equal across them...

Since they're all in series (both resistors and the LED) you can get creative with placement. Put both resistors before the LED, or one before and one after, or both after!

One option you may have is to take a look at your circuit and where the supply current is used. It may be possible to simply place the LED in series with some other circuit that:

If you can find this in your circuit you would basically be moving that wasted 200mW of power from the resistor to another part of the circuit where it may be put to better use.

If you have any lower voltage rails available, you can use a single transistor and a voltage divider.

The voltage divider drives the 24V down into the gate/base of a transistor, then your LED draws power from the lower voltage rail. Something like this: 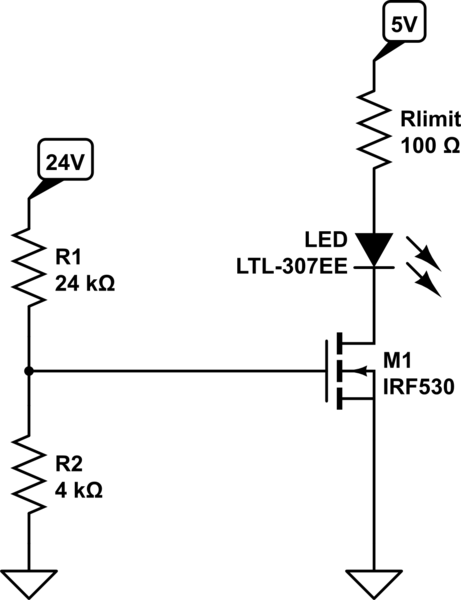 I looked for a high efficiency, high voltage step-down DC/DC switching converter and found the LTC3632, but you need the chip, two capacitors, two resistors and an inductor. May be used for input voltages up to 50 V.

Efficiency better than 70 % for a current of 0.1 mA. Two resistors to set output voltage, one condensator at input and output and one inductor. Of course one more resistor to set LED current.

Did not look for the price of the chip. There may be other DC/DC switching converters from other manufacturers.

Drop the voltage with silicon.

Your problem is the voltage across the resistor. If you can reduce that, you'll cut your power dissipation.

The obvious solution for dropping voltage would be a Zener diode in series with the LED and current-set resistor. With an 18V Zener and maybe 2V across the LED (to use round numbers), you've got 4V across the resistor. A 400R resistor will give you 10mA, and you've only got 40mW power dissipation on the resistor.

Not the answer you're looking for? Browse other questions tagged led debugging or ask your own question.

5
12V LED strips in series with a 24V power supply?
3
SMD LED footprint
1
15v to 3v LED - resistor vs regulator
2
Power dissipation when connecting LED to +-15v
0
Design recommendations for an array of different forward voltage LEDs
1
Large parallel strings of LEDs
18
Why did my LED resistor burn while lighting four LEDs in series?
0
Switch 12V and 24V low current load (LED button) with 3.3V and 5.0V arduino
8
Can I use blue-green LEDs as MCU state indicators on 3.3 V power?
1
How to fully shut off an LED indicator when used with a Smart Switch?