Both share some disadvantages, like any time an AC supply is switched, power factor is affected. Advances in MOSFET technology mean that prices for high-voltage transistors have evened out.

Question: For loads that are compatible*, what are some reasons against "rectify AC and use a high voltage MOSFET" and favor "triac phase angle control with zero crossing detection"?

*Some AC loads also function on DC: resistive bulbs or heating elements, universal motors, etc. and therefore maintaining AC is not a requirement. Assume higher non-RMS voltage is not an issue.

One of the issues is that Rds(on) increases rapidly with breakdown voltage rating for MOSFETs (for a given die size) and it does not for triacs, SCRs or IGBTs, so high voltage high current MOSFETs tend to be expensive and/or require expensive protection against transients.

When you rectify you're also adding two diode drops' worth of losses. The triac avoids that.

Nothing is really perfect, but in the 10+A/240VAC range triacs (especially in the form of SSRs) and mechanical relays or contactors stand out. In the first case you have heatsinks to provide (which may cost more than the SSRs) in the second case you have lifetime to worry about. Solid state switches tend to fail 'on' and can easily be destroyed by a heater failure, even with expensive fuses, unless grossly overrated (and thus more expensive). It's fairly easy to protect a 40A triac with a < 5A load, but not so easy at higher currents.

Mechanical contactors can withstand a bit of abuse (transients, surges) but have a defined life. And they click, which may or may not be an issue. It would be nice if we could buy a solid-state device which could withstand a 2000V surge, a 500A momentary short AND had almost no losses, but they don't exist, at least not at an affordable price because acres and acres of silicon would be needed.

We used to use mercury displacement contactors because of the very long life, quiet and cool operation and only occasional explosions, but they are verboten these days in many situations.

Some of the reasons for using a Triac over MOSFETs are: lower cost for equivalent voltage and current ratings, requirement of only a single device, and, quite frankly, tradition. MOSFETs have historically not been very practical for controlling AC loads given the higher voltages involved.

For those used to working with MOSFETs as DC switches, rectification of the AC power seems like a logical approach for some loads. But in reality, rectification adds additional components, lower efficiency, and additional losses (heat dissipation).

However, rectification is not actually required in order to use MOSFETs. AC power can be directly controlled with a pair of back-to-back MOSFETs, in series, sharing a common source terminal: 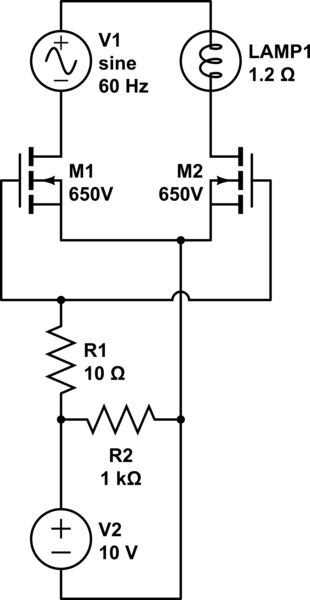 The lower, DC part of the circuit above can easily be controlled by an opto-isolator.

Only two MOSFETs are required, and assuming you have galvanic isolation worked out, gate control is very simple, as the MOSFETs share a common source terminal and are both switched on together regardless of the phase of the AC cycle. Phase angle or zero-crossing detection is not necessary either, although you may want to do it for purposes of reducing device stresses and electrical noise during switching.

It turns out that modern MOSFETs can also be significantly more efficient than Triacs:

A typical 650 V Triac has a relatively constant forward drop of 1.55 V. This equates to 15.5 W of heat dissipation under a 10 A load, requiring a substantial heat sink (or possibly active cooling). Triacs are not easily paralleled for better performance.

A nice 650 V MOSFET, such as ON Semiconductor's NTH027N65S3F, has a typical on-state resistance of 23 mΩ. Since two are required in series, that's 46 mΩ total, resulting in 4.3 W of heat dissipation under a 10 A load; less than 1/3 of the Triac. Passive cooling with a relatively small heatsink is much more practical.

Because of the relatively constant voltage drop, heat dissipation in a Triac tracks mostly linearly with conducted current: P = I * V. In contrast, heat dissipation in a MOSFET follows a mostly quadratic relationship with conducted current, due to a relatively constant on-state resistance: P = I^2 * R. In a low-resistance MOSFET (e.g. 46 mΩ as mentioned above), the heat dissipation curve is well below the straight line of a comparably rated Triac, up to nearly 30 A. Above these currents, a Triac would dissipate less heat, unless you use lower resistance MOSFETs or parallel multiple devices to a achieve a lower resistance (something you can't really do with Triacs!).

The downside is that the cost of using MOSFETs is about 4x higher than the Triac. However, control is easier and the circuit design is quite simple.

With any solid-state AC solution, I would protect the device with MOVs and definitely incorporate a separate fuse or breaker for safety purposes.

Not the answer you're looking for? Browse other questions tagged mosfet ac pwm mains triac or ask your own question.

3
Can a triac which is driven by another triac be used for switching AC continuously?
4
Driving a contactor from TTL
1
Do I need zero-crossing detection for controlling a heater?
0
High Voltage Triac Control
2
Controlling a 240V AC Universal Motor with Microcontroller, Optoisolator & TRIAC
1
A question about triac output of zero crossing SSR relay
0
Calculate Angle for Triac Phase Control
0
MOSFET relay as an alternative for TRIAC relay
0
Phototriac for low voltage AC motor control without external triac