Would it be reasonable to implement a soft ON/OFF button like this? 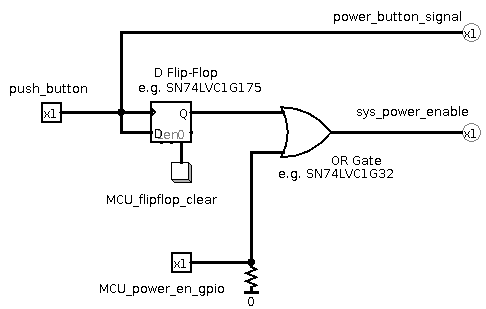 My design requirements in short: 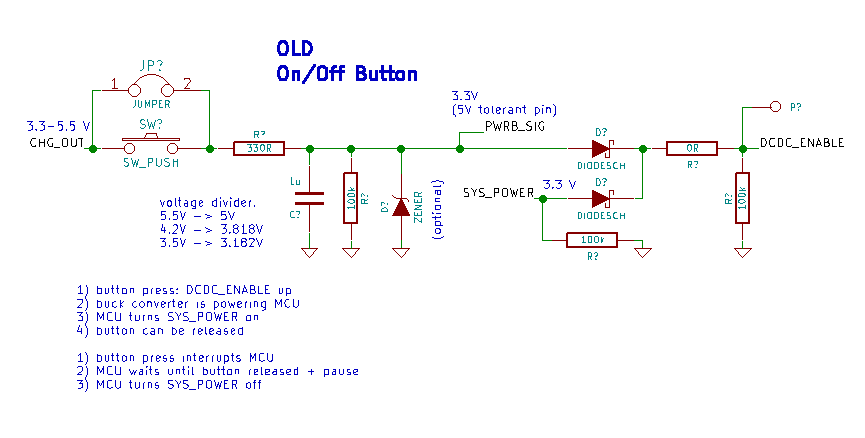 To my surprise it works pretty well, but I had two problems with it:

I'm currently trying to find a simpler solution, and sketched up the idea above in Logisim. The key is to use a storage element like a flip-flop.

(One problem I see with that solution is that the flip-flop would need to be powered by the battery directly. - (The flip-flop could possibly replaced by a S-R latch, but invalid states could occur... Or the OR gate could be replaced with three diodes, one additional input connecting the power button directly to the system power enable pin. Then the flip-flop would need to react to the falling edge, and be powered on after system power comes up. But that seems dangerous and overly complicated...))

By the way, I'm currently trying to learn more about electronics and I'm no expert at all. - This is a hobby-level microcontroller project, designed in KiCAD.

This solution is slightly similar to Cristobols but maybe with a better defined start state and less strain on the MCU pin. This: 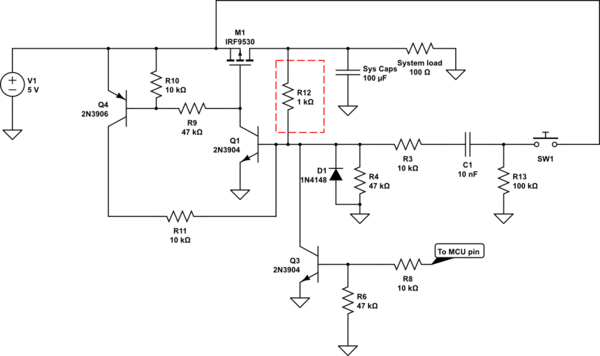 R10, R9 keeps M1 turned off when power is applied. When SW1 is pushed M1s gate is grounded by Q1 and M1 starts conducting to the load. Q1 also activates Q4 so they are latched on. C1 makes a short pulse to the Q1 base, so if the user holds the button pressed Q1 can still be turned off by Q3. The MCU can decide to switch the power off by sending a pulse on Q3. R6 can probably be adjusted to mitigate effects of high impedance/pullups if the MCU goes into reset.

The idea here is to not latch on M1s output since it probably has a bit of capacitance connected to it. An example: if the base of Q1 was connected with a resistor to M1 illustrated by the red boxed R12, Q3 would have to discharge the system capacitors through R12 to shutdown M1.

Edit: Just realized that you're actually controlling the EN pin of a regulator and not switching the load path directly. But I think the suggested circuit would work on an enable pin also. 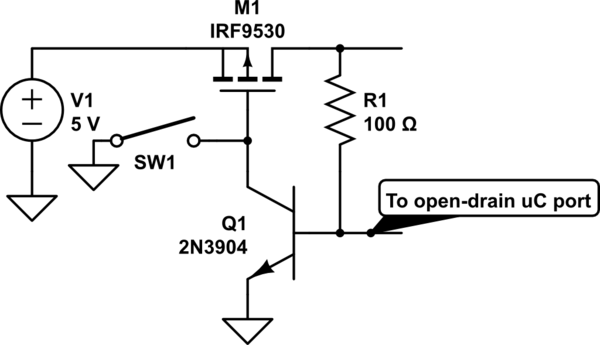 Connecting a push button directly to the CLK input of a flip flop will result in the flop togging multiple times due to bouncing of the switch.

A second thing is that the inputs to a flip flop, the D input in this case, require setup time to be stable at a logic level before the CLK rising edge. As such it will not work to tie the CLK and D inputs together.

A good design approach for this type of switching is to use the push button to turn the power on and then let the MCU be able to read the button state and leave all control for turning the unit off be made by the MCU software. If you use a P-FET to switch the power on then in the off state there does not need to be any current from the battery except for any very low level leakage current when the P-FET is biased in the OFF state.

Two signals from the MCU are required, one to monitor the button state and a second to hold ON the power or shut OFF power. Depending upon how you choose to build the associated circuitry around the P-FET it can sometimes be simpler to add a third MCU signal to the mix and separate the hold-on function from the turn-off control. The circuitry for this kind of thing does not require logic chips. Also the MCU must wake up quickly and one of the first things that the MCU software must do is to assert the hold-on control.

Not the answer you're looking for? Browse other questions tagged microcontroller power flipflop logic-gates button or ask your own question.