Why would an IR remote circuit use one resistor/transistor pair for each LED?

I've done some reverse engineering work on the protcol for a remote that... sucks. I'm replacing it with one of my own design, but while I've improved on the interface, the range and view angle of my system are terrible. I'd like to complete this as soon as possible... I, uh, fried my original remote while trying to debug my own. =]

So, like any good geek, I thought I'd borrow from someone else's successes and pulled up the circuit diagram for the TV B Gone: 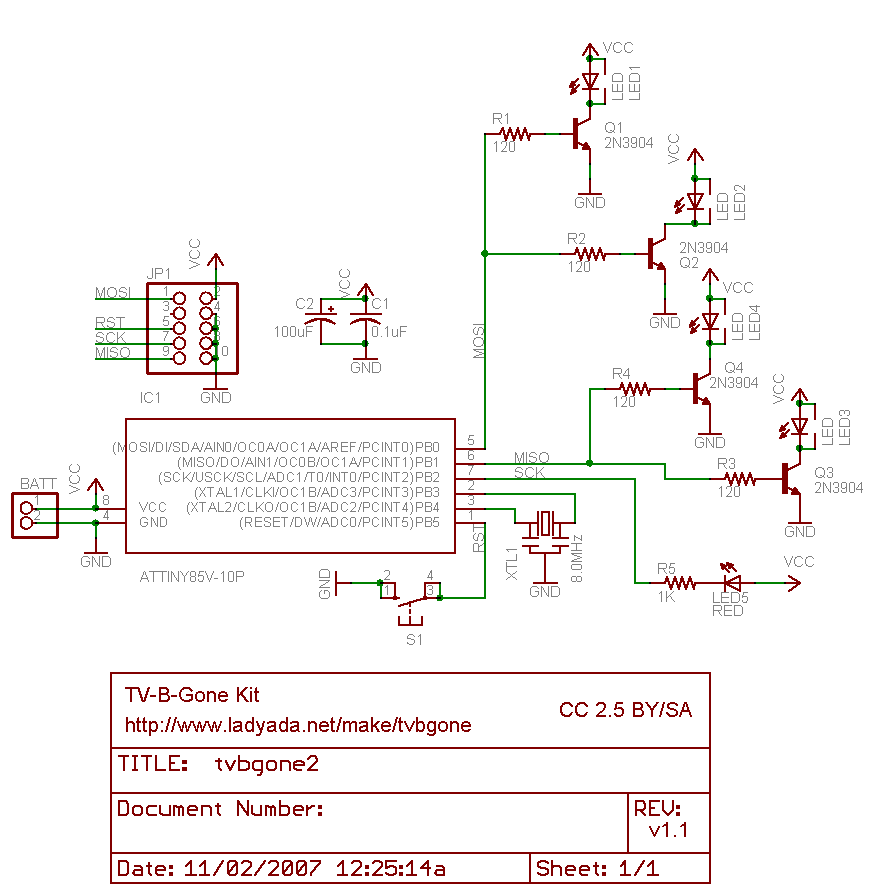 My question is, why have one resistor and transistor for each LED, instead of chaining the LEDs in series and controlling them with a single transistor which is controlled, in turn, by the arduino pin coming in through a single resistor?

I have no qualms about implementing the same way (frankly, I'm tempted to use about 32 LEDs, resistors, and transistors just for the hell of it,) but I'd like to understand why it was done this way.

The forward voltage for an IR LED is much lower than for a visible light LED, typically around 1.3 V, but rising if you push real high currents through them, like > 100 mA. There seems to be no reason why you couldn't place two of them in series, especially if your Vcc would be 5 V. If your Vcc comes from a pair of AA batteries though, the voltage drop of two LEDs + the transistor's saturation voltage may come close to Vcc and that could limit the output current.

The two outputs to drive the four LEDs are to avoid overloading the microcontroller's output. Or better, should avoid overloading. A 120 Ω resistor means 35 mA base current per transistor, and that's too much already for the AVR, let alone the 70 mA which it will draw now.

Alternatively you could use a FET to drive the LEDs. A PMV20XN can handle several amperes and has an on-resistance of only 25 mΩ so it will dissipate hardly any power. 1.5 V gate voltage is sufficient for 2.5 A.

edit
A note about current limiting. Usually we'll have a resistor in series with the LED for that, but if you look at the schematic of a commercial remote control that resistor is often missing, because they count on the batteries' internal resistance for that, and then they save another 0.001 dollar per remote controller.

This is not a good idea if you power from a mains powered voltage regulator. That will limit the current, but at a too high level, and if it doesn't destroy the LED immediately it will severely limit its lifetime. So a small series resistor is recommended. At 5 V supply and 2 LEDs in series you'll have a voltage drop around 2.9 - 3.0 V, so for 100 mA you need a 30 Ω resistor. Peak power will be 300 mW, but at a 50 % duty cycle average power is only 150 mW, then a 1/4 W resistor will do.

Chaining the LEDs in series means you need a higher voltage supply to drive them all. And putting them in parallel may lead to issues if the LED characteristics are not nicely matched, or if your transistor can't handle the current of all LEDs at once.

They may have used multiple microcontroller pins for flexibility -- for example, this device now has the option of lighting fewer LEDs and therefore saving battery power.

It appears to me that the circuit is expecting the 3904's to limit the amount of current flowing through them to the correct amount for the LED. Since the transistor rather than a resistor is being used to limit current, and since each parallel-wired LED (or string of LEDs) requires its own current-limiting device, that implies the use of a separate transistor for each LED. I don't think I'd design a circuit that way, since it's sensitive to the beta of the 3904's, and transistor beta characteristics are normally not specified very tightly. Still, the circuit does have the advantage that current is somewhat less sensitive to VDD than it would be if it simply used a hard-switching transistor and then series resistors for the LEDs.

As for the use of two processor pins to control two separate LEDs, my guess would be that if the LEDs are pointed in substantially different directions the controller might be activating them at different times. Infrared remote signals typically alternate between 50% PWM and off. If during the "50% PWM" time one drives two sets of LEDs alternately, the required peak current would be cut by half. The one disadvantage would be that anything which only saw light from one LED would see a full-strength carrier wave, but something which saw some light from both LEDs would see a carrier wave whose strength was the difference in strength of the two LEDs' light. This factor could be mitigated by using e.g. a 25% PWM signal and having the two sets of lights operate on adjacent quarter-cycles. This would allow the use of higher LED currents, which would offset the receivers' reduced sensitivity to non-50% PWM waves. Further, a device which saw light from both LEDs would see a nice 50% carrier.

Not the answer you're looking for? Browse other questions tagged led transistors infrared remote-control or ask your own question.

34
I'd like to learn how to make my own USB gadgets
4
Need comments and ideas for LED flashlight project
5
Repurpose an old lamp with LEDs. Where to start
10
Help with or hints for decoding an IR protocol
2
How to use a transistor to drive strings of LEDs from GPIO pins?
1
Noob question: blinking leds with pn2222A and 9v battery
0
Connecting an IC to LEDs - would I use a transistor?
0
Why use a transistor to drive an LED?
0
Troubleshooting IR emitters using an Arduino