Anyone know what the output voltage of a typical DirecTV LNB might be? I've converted an old dish to be a backyard radio telescope and I'm hoping to record output levels with a USB oscilloscope, as I find the results of using an SDR dongle to be less than optimal. Thanks!

The output is around -40dBm into 75 ohms. Plus minus like 10dB. That's just looking at blank sky. I've never measured it when pointed at anything powerful (like a satellite or the sun.)

Peak to peak is pretty much pointless. It is noise. At any moment, the peak could be many times the RMS - and then a fraction of it.

You won't be happy with what you get from your oscilloscope. The signal is around 2.5GHz. I sure as heck don't have a scope that can handle that in my hobby room.

What you need is something to convert the RF to a dBm reading (which you can mathematically convert to microwatts or microvolts at 75 ohms or whatever.)

The MAX2015 has a dynamic range of 70dB. 20 to 40 would probably be adequate, but I didn't know that when I started. It is handy in that I pretty much don't have to even consider the input level. But, that is also a disadvantage. The higher dynamic range comes at the cost (I suspect) of higher noise from the chip itself.

My gadget is driven with servos. I use the high resolution of the signal strength to make pictures of ambient RF.

This is an image of a window in my work room, taken with my steerable satellite dish: 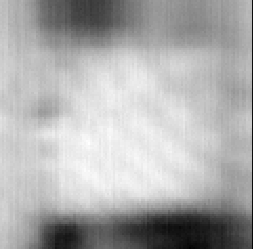 The shape is fairly clear, and you can see the cooler section of wall above it (hollow for a roll up shade.)

Below it is a cooler section where the radiator (hot water, actually cold when the image was made) can be see.

This image is probably of more interest. I had to recreate it from the recorded raw data, which why I didn't post it earlier: 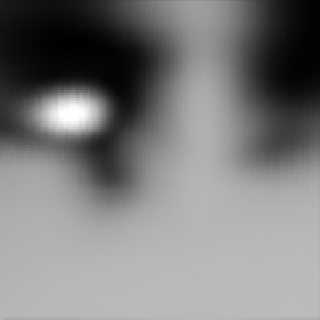 That's the moon through a break in the trees and shrubs behind my house.

The moon itself peaks at an intensity of -40.4dBm. The shrubs along the bottom reach about -41dBm.

Stars and planets will also appear very oversized. The solution to this is called deconvolution. I intend to implement that in my software as well.

Deconvolution is also the solution to the moon being somewhat football shaped (rugby, for the non-american parts of the world.) The dish is elliptical - it is higher than it is wide. That makes the beam flatter and that makes the moon football shaped. A round dish would deliver a round moon.

I did in fact use a modified satellite finder for my first experiments. It was way too noisy, but I could see that were details to be found and looked for a better way.

There are many alternatives to the ICs I used. Those were the ones I found that I could get hold of easily and make use of.

The detector is built as an add on to an Arduino.

The Arduino talks to the hardware, and communicates results back to a program on my PC.

The whole thing has a custom PCB, a hand built frame for the servos and the dish, and a bunch of software.

The controller also has provision to switch the LNB band and polarization.

I really need get back to work on the software on the PC, though. I have a lot things I want to do with it, but it keeps getting pushed off.

Damn. I want to quit work and just fiddle with that machine. :)

To see the LNB output in an oscilloscope, you need a diode detector with a bandwidth of 2 GHz, or another way of mixing the signal down to a low frequency. A regular scope won't see the 1 to 2 GHz signals at all.

Peak to peak value of a noise signal is not limited - it depends on how long you look... But an eyeball of the trace might be 6 times the RMS, say 15 mV.

I think you're much better off using the SDR. If you want to go the diode detector route, find a cheap "satellite finder" device, which has a detector, amplifier and some sort of indicator. Connect your scope to the output just before the meter.

Not the answer you're looking for? Browse other questions tagged radio software-defined-radio or ask your own question.

2
Simple radio serial communication
4
How to calculate the LNB output frequency from a satellite transponder?
2
Why is receiver RSSI so much lower than the output power of a transmitter?
3
Car radio output voltage
2
Satellite detector and a mobile phone
0
Improve output quality of FM receiver TEA5767
0
Where should I start troubleshooting a CC1310 radio design?
1
Unbalanced RF output to FEM module with balanced input
2
Consistent Radio wave detection timing