We have some PCBs that were designed to drive high-power ultrasound transducers. There was an issue with the boards early on that resulted in several of them blowing diodes.

I have since fixed the issue on the remaining boards and am trying to repair the dead boards to solder on some new diodes.

However I have run into an interesting issue that I have never seen before, which is that the lead frames of the QFN packages seem to have metallurgical bonded themselves to the PCBs. This is presumably because they are copper lead frames.

The board is 4-layer with 1oz copper and a large number of thermal vias - there is normally a large heat sink on the reverse side which I have removed it during the rework attempts.

Below is an example of a diode that I've tried to remove. To heat, I am using a hot plate (Weller WHP200) to bring the board up to ~150C and then a heat gun to bring the diode up to ~350C. However on all five diodes that I have attempted I seem to be only able to remove the package - the lead frame seems to be stuck fast. Even heating to ~400*C doesn't seem to allow it to budge. 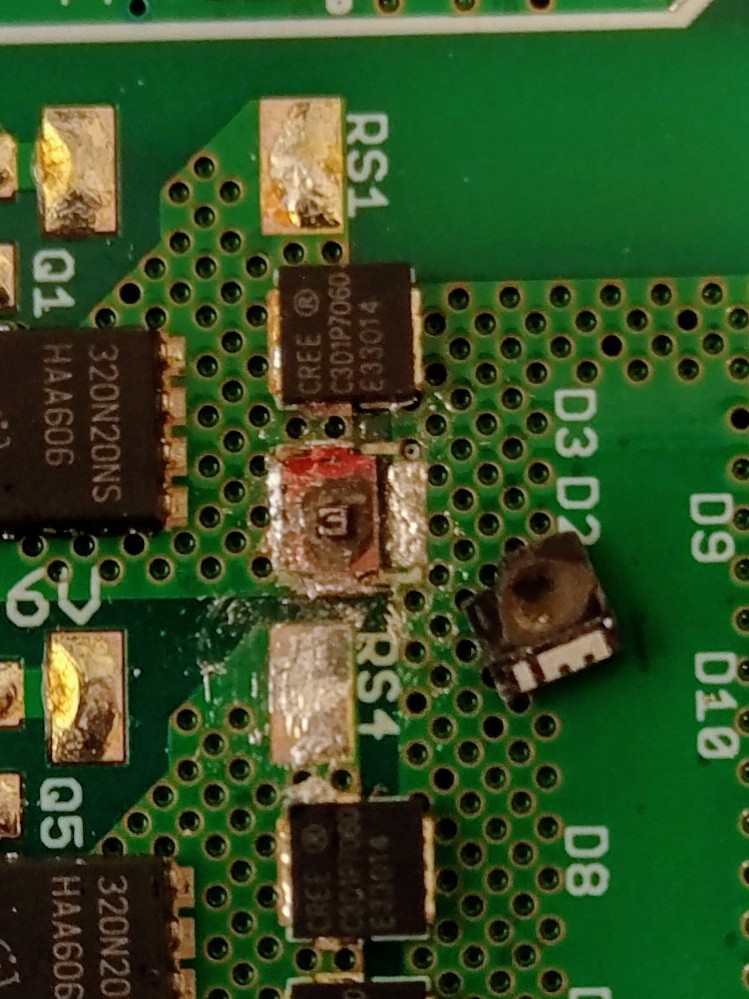 I also have a 120W soldering iron to hand (Weller WXP120), and have tried it out as @Spehro suggested. However even leaving it on the copper slug for a good couple of minutes at 380*C (board hot enough that solder on the RS1 pad in the picture was wet), the slug won't budge.

Has anybody come across this issue before? Do you have any suggestions for how to remove the lead frame?

I don't mind experimenting on the boards as if they can't be fixed, they are scrap anyway. So if you have any ideas you'd like me to try, I'm all ears.

You'll need a h*ll of a lot of heat to get that solder to melt, that's by design, all those vias and probably 2oz or greater copper thickness is designed to spread the heat.

An air gun probably isn't going to be enough. There are specialized rework tools, but for a few you might want to try a BIG soldering iron, say in the 120W range, after preheating it to 100'C.

The lead frame is basically just a solid chunk of copper, and in the process of trying to desolder it, I ended up just tinning the copper slug.

It dawned upon me that as it is copper an a decent heat conductor, I might as well just try to solder a new diode straight on top of the old lead frame. 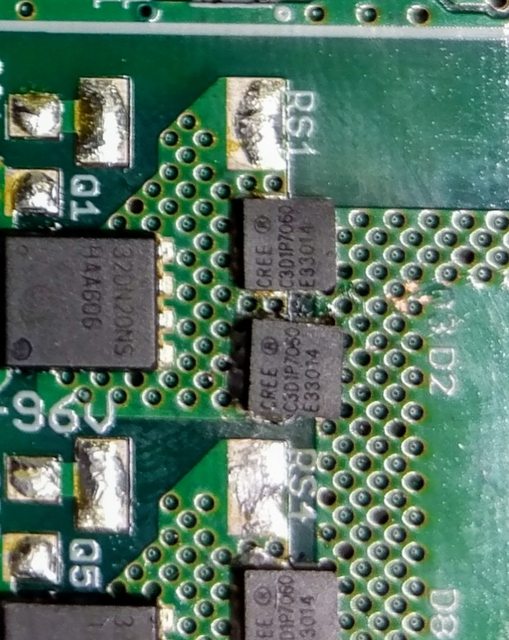 A little bit crooked, but seems to have gone on OK. Managed to build up a bump of solder on the smaller pad to match the height of the copper slug. Then used the hot air gun and flux to get the solder to connect up nicely to the diode pads.

Doesn't really answer the question of how to remove the lead frame, but it does get me to the stage of having a diode reattached. Just need to power it up and give it a spin.

Not the answer you're looking for? Browse other questions tagged soldering qfn or ask your own question.

6
Removing hot glue
3
Removing PCB from complex pattern of soldered-in thru-hole posts?
9
What are those black spots in these lead-free solder joints?
1
aluminum PCB soldering techniques for prototypes
17
How to remove this component from PCB
0
Remove/exclude exposed pad of QFN package from PCB layout
6
How can I prevent lead free solder from ruining my soldering iron tip? Can I re-tin my tips?
2
Removing solder from stubborn joints [Soldering Advice]