Can an electric stovetop burner be damaged from prolonged use without cookware on it? [closed]

My partner, who does building maintenance, thinks that it may be possible to damage an electric stove top burner by extended use without a pot or pan because the heating element doesn’t have something to dissipate the heat into.

To me it seems like the heat would just be dissipated into the air, and the element wouldn’t get and hotter than its max setting.

I found some information about thermal regulators, but it’s not clear to me exactly how they work or if they work the same without cookware on the burner. We also have a very old stove and aren’t sure if the technology would be the same.

(The backstory is that I occasionally take the cookware off the burner between cooking ingredients so that I’m not damaging the cookware while there’s nothing in it, while I take a minute or two to prep the next ingredients for the pot.)

Edit: this is not a glass cook top, it's regular electric burners. I have viewed inside the oven that the model is J CS66 0W2AD. The serial number indicates it is from March of 1980. The maker is General Electric.

An older stove element likely uses no active thermal regulator. It will run hotter, brighter when you remove cookware. It should be safe to run this way (from an electrical point-of-view).
However, watch for a hot spot, where one small section of the element is brighter...an indication that the element is damaged, at risk of imminent failure.

Relax, there is no problem with not having a pot on the burner.
Take a look at what is under the ceramic glass top. 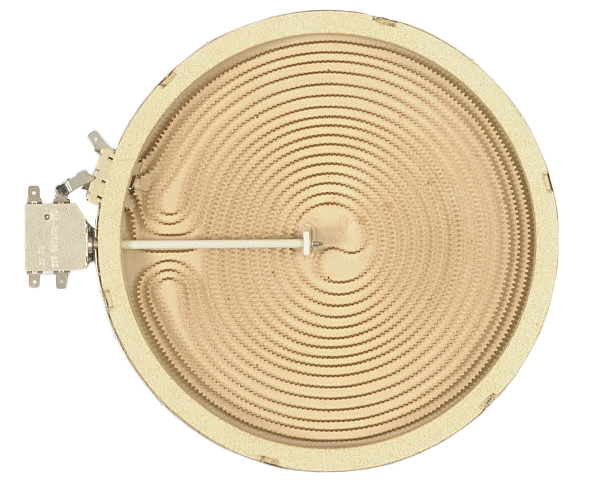 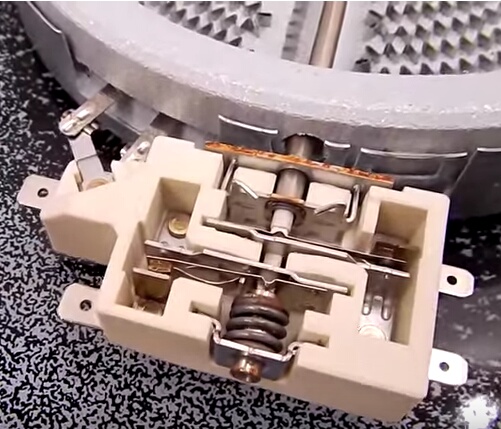 From the above you can clearly see it does not matter if there is a pot on the stove top or not.

There are no reflections from the pot involved and no mysterious sensors. Nothing to do with Color Temperature, not related to light bulb filament lifespan, or infrared waves. The heating element has no variable brightness, only off or on.

I don't think so (something shiny like a stainless steel pot bottom is worse because it reflects the IR back into the heater on smooth top ranges), but the element and the (usually mechanical) device that drives it both have a finite life, so you're wearing them unnecessarily.

Also it sucks electrical energy, which is wasteful and costs money if you don't need it.

Also, it is possible to forget it and leave it on for a long time, which is wasteful (and even if the burner is not vacant it could easily damage an aluminum or non-stick coated pot).

I would say you should turn it off if you're not using for more than about 30 seconds.

Not related to the burner per se, but if you allow a smooth top cooktop to get very hot and place a pot with a wet bottom onto it (or let bit of liquid overflow onto it) you could induce crack propagation from a minor scratch and b*gger the whole top. At that point it's typically more sensible to replace the entire range or cooktop. Crazy expensive.

in the case of thermostatic tops the temperature sensor needs to contact cookware for them to regulate their heat, for those with just a power setting if there's no cookware cooling them down they will get hotter than usual, I've seen them get hot enough to melt aluminium. also seen them glowing orange,

My partner, who does building maintenance, thinks that it may be possible to damage an electric stove top burner by extended use without a pot or pan because the heating element doesn’t have something to dissipate the heat into.

"May be possible", OK, it "may be possible". I've used the stovetop as a heater, never burned them out. People sometimes leave them on, it happens. The heat dissipates into the air. 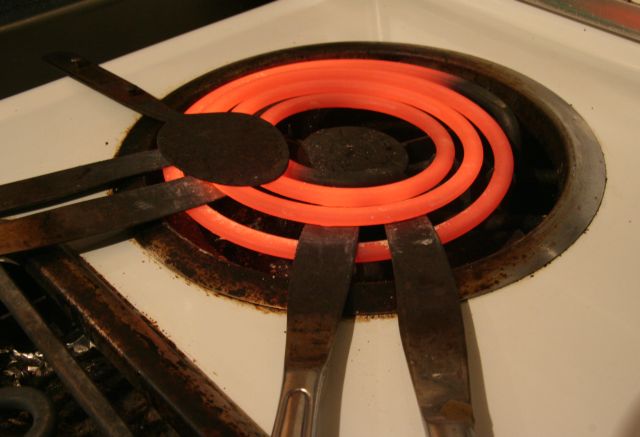 Does he think if he goes outside it "may be possible" to get hit by lightning, thus he never goes out? What about driving a car or walking on a sidewalk ... just think what could happen!

Overall I would say listen to your husband even if he's wrong.

But in theory your husband is correct. In practise, you need a model number and data to support it.

(correction) Without a pot, there is less reflection to the sensor so the element will be slightly hotter and may appear a brighter red according to it's color vs temperature.

2nd correction. If your stove is really old like mid60's it wont have any temperature sensing and just has resistance elements switched by Low, MedLow, Med, Med-Hi, Hi

If removing your pot keeps the element to 500'C (dim Red) at areas of contact then rises to Bright Cherry Red that is equivalent to 1000'C and means the lifetime will significantly be reduced in hours of MTBF due to an effect called Arhenius Law which states failure rates double every 10'C rise when there are no defects.

But since we don't know how many centuries it will last at room temp its hard to predict. But like a light bulb at 2500'C if enclosed in a small globe , it may raise the bulb filament temp 40'C and only last 1/16 of 2000 hours ( estimate ). 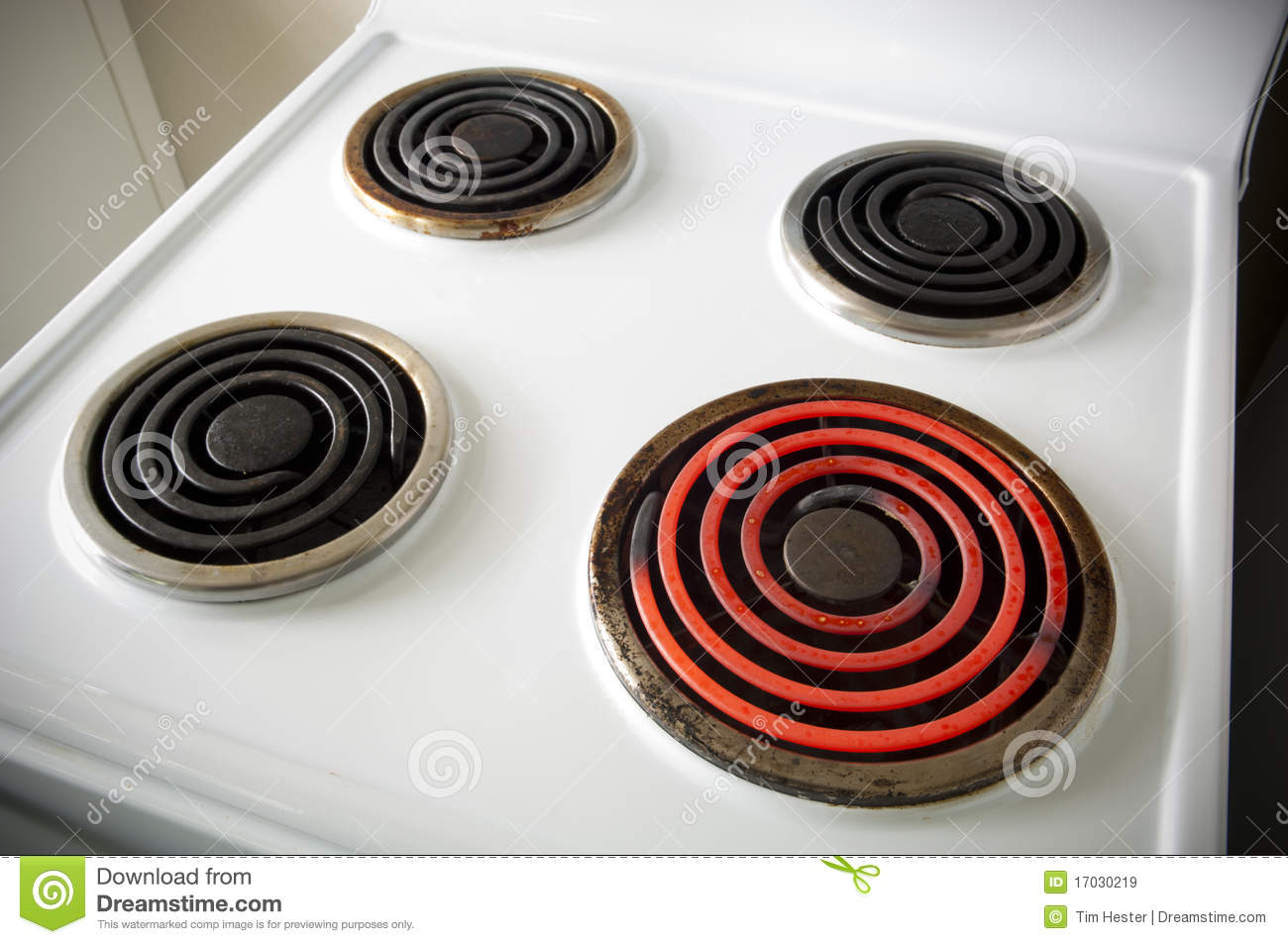 But in the end it may not make any difference as the pot does not make contact with the entire elemment all the time and if some parts are still Cherry Red , they become the weak link in the chain and will break there.

So it wont matter if the pot is on or not. It has a limited lifespan.

Not the answer you're looking for? Browse other questions tagged heat or ask your own question.

0
Can a solid capacitor be damaged by a heat gun?
3
Can I use lower gauge wire for short runs of longer high amp circuits?
4
Hot wire cutter. Can I use copper wire
2
Can part of Integrated Circuit be damaged from heat gun usage?
0
Can I use a power supply as a constant current source?(+general understating problems)
0
Can 2 9v batteries heat an electric range heating element
5
Can I use DC to drive underfloor heating wire?
1
Thermo Electric Can Heater / Cooler Heating vs Cooling Speed
10
Heat output from a 200W electric radiator?
1
Can we generate electricity efficiently from a peltier device by supplying heat?