When IO is limited on a uC, how do you move the logic away from the uC?

For instance, if you had an Arduino with 4 digital IO pins, how could you independently light > 4 LEDs, or read the state of > 4 buttons?

A shift register such as the 74595 will allow you to have many outputs with only 2 connections: a data pin and a clock pin. You set the data pin to the next value you want to move into the register, and then pulse the clock pin.

Bruno gave a good answer, but I'd like to make a few notes.

The infamous 70 mA
The 74HC595 is often used as I/O extended, and as often used to control a series of LEDs. What is often overlooked is that you may operate it out of spec this way. The datasheet says that the total supply current shouldn't be more than 70 mA, Absolute Maximum Ratings (AMR), so you better stay away from that by some margin. Therefore 8 LEDs at 10 mA is too much, and at 20 mA you'll exceed AMR by no less than 130 %! The limit is probably due to the current capacity of the bonding wires, and then the too high current may not just deteriorate the part's performance, but permanently put it out of order if that wire would break.

But last night I woke up because I had An Idea. The 70 mA limit goes for both Icc and ground current, then why not split our total or 80 mA and let Icc have half of it and ground current the other half? All you have to do is reference 4 of the LEDs to ground (active high), and the other 4 to Vcc (active low). Then the current of the former comes from Icc, the current of the others goes to ground. You'll be able to use 15 mA LEDs this way. (It's so simple that I feel like an idiot not to have thought of it sooner.)

The combined clocks
I thought Bruno saved an extra I/O pin by combining the shift register's clock with the latch's. Seems I misinterpreted his answer. I still want to expand on this option.

What happens then? The table on page 5 of the datasheet says:

(highlighting by me)
So it's not the new data but the previous which is being latched. Not a real problem, just make sure to shift in an extra dummy bit to latch the last data, or everything will be one pin wrong.

Combining the clocks also means that the outputs will toggle all the time while you're shifting new data in. The latch's function was actually to avoid that. In many cases this won't be a problem, if you can do it fast, but in worst case situations you may get undesired effects. Worst case could be using the 74HC595 to multiplex a display at a very high scan frequency + have a very long chain of shift registers + have all 1's except for one 0, a LED that's off + a dark room. Since that LED sees all the 1's passing every so often in a dark room it may light very faintly.

Or if you combine that high frequency multiplexing with a relay control output. All zeros and then a 1 for the relay may mean that the relay's output is not long enough high to pull-in.

Granted, those are extreme cases, but I would keep the serial and latch clock separate whenever possible if you want to multiplex, or otherwise have high update rates.

I agree with Ignacio regarding the use of a 74XX595, serial in parallel out shift register for output expansion, but actually you will need 3 connections, one for data, one for clock and one latch enable that will transfer the data from the internal shift register to the output latches. 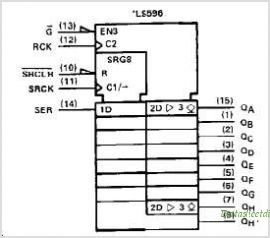 For the expansion of the inputs you could use a 74XX165, parallel in serial out shift register, this will allow to have up to 8 buttons per 74XX165. 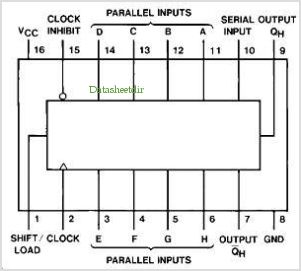 The good thing about this approach is that you can daisy chain several shift registers allowing a increased number of inputs or outputs, and better, you can mix 74XX595 and 74XX165 allowing and you to have any number of input or outputs.

Besides that you can share the clock and latch signals reducing the number of connections needed and greatly simplifying the software. This way you will only need 4 connections for any number of any of this shift registers:

As I was searching for a diagram I found on this website a very clever way to reduce to 3 the number of required connections. It consists in using the same pin for data input and output.

The software will do something like this for each clock pulse:

Nick mentions I/O expanders, and they're definitely worth looking into. Digikey lists more than a thousand of them, I'll pick one with an I2C interface as an example, because that requires the least I/O pins; minimum two.

The NXP PCA9505 has 40 configurable I/O pins, the equivalent of five 74HC595s. It's a slightly more expensive solution but you get much more functionality for that:

For a solution with no extra ICs, you can use techniques such as Multiplexing and Charliplexing: 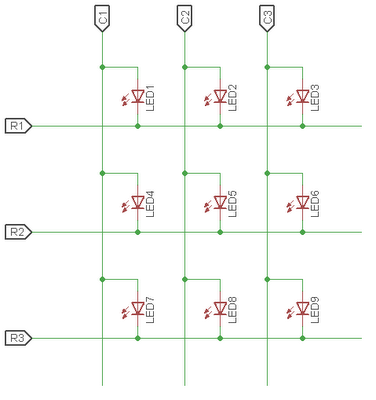 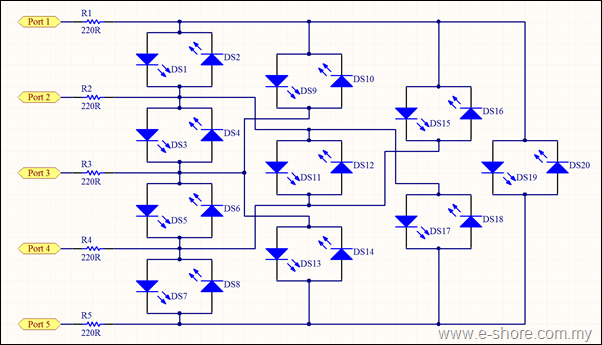 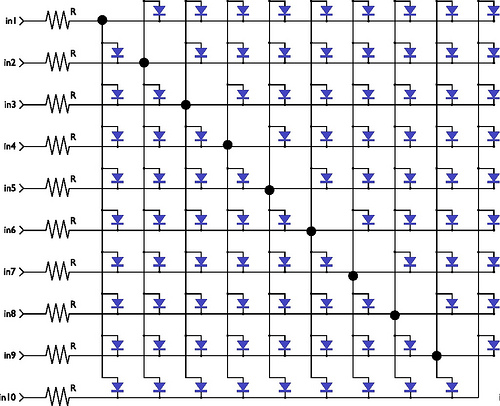 This is a little more complex, but uses less pins to drive higher numbers of LEDs. For example, we can use just 5 pins to drive 20 LEDs as in the above example (compared with at least 10 pins with "normal" matrix multiplexing (not to be confused with using an IC in which case the number of pins needed is log2(nLED).

For an external solution, you can use things like Shift Registers or Multiplexers such as 74HC595 and 74HC151.
A shift register takes a clocked serial input stream of data and outputs parallel (Serial In Parallel Out SIPO) or the other way round (PISO)
They generally have 8 outputs (or inputs) but you can chain as many as you like together to extend things. The down side is the speed you can update is divided by the number of outputs per input (e.g. for one register of 8 outputs, if you have an 8MHz input clock you can update at 1MHz, for 16 outputs 500kHz, etc)

These techniques can work in reverse for inputs too.

5
AVR Pin Dual Use: Input and Output at (seemingly) the same time
9
Does driving an microcontroller's GPIO when it is powered off weaken the chip?
0
How to drive 50 LED from a 3.3V MCU
0
Controlling pull-up pins from external circuit
3
Using a microcontroller to make a series of LEDs blink one after the other
2
Can SPI and I2C be implemented using GPIO pins?
0
How does a CPU interface with GPIO pins?
2
How to use a transistor to drive strings of LEDs from GPIO pins?