In a circuit being switched by an NPN transistor, do power supply and input need the same ground?

I'm trying to make a circuit that will allow me to switch on a relay that will turn on an LED. However, the relay is rated for 12 V, and I only have an input of 5 V, so I'm using an NPN transistor. to switch the power to the relay on and off. Here's the schematic: 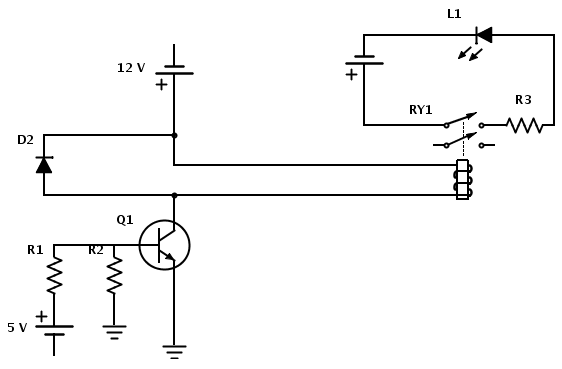 I'm completely new to this, so any help is much appreciated.

1), 2) and 3)
If you use different power supplies in a circuit you have to connect them some way or another so that they have a common reference. You will almost always connect grounds, since they are your reference. Voltage is relative: if you take the batteries' plus as a reference the minus will be at -12 V, if you take the minus as reference the plus will be at +12 V. Few circuits will use the plus as reference, we like positive voltages better. So the batteries' minus goes to the Arduino's ground.

How does the base current know which way to go when it exits the transistor via the emitter? Current can only flow in a closed loop, from the plus from the power supply to the minus. The base current started at the +5 V, so it would not close the loop when it would go the way of the batteries' ground.

4)
We'll leave R2 out for a moment. Because the base-emitter acts as a diode the base is at around 0.7 V. You apply 5 V to activate the transistor, then according to Ohm's Law the current through R1 (which is the base current) is \$\frac{5V-0.7V}{R1}\$. The transistor will amplify that current to a sufficiently high collector current to drive the relay. What's sufficiently high? Therefore you have to check the relay's datasheet. It will either tell you the required current, or the coil's resistance, and then you can calculate the current, again with Ohm's Law. A relay typically needs around 400 mW to activate, so for a 12 V relay that would be a current of 400 mW/12 V = 35 mA. That's the minimum collector current.

To find out how much base current we need to get that we have to look into the transistor's datasheet. Let's say I have 100 000 BC547Bs lying around (I forgot the decimal point when I ordered them) for which I need a purpose. The current gain is given by the \$h_{FE}\$ parameter, which we find on page 2 of the datasheet. For the BC547B that's minimum 200. (Always use worst case values, for \$h_{FE}\$ that's the minimum value. If you use typical values you may have too little current for some parts.)

Let's pick a 10 kΩ resistor. That's a much lower value than we needed but we'll be OK. The base current will be around 0.5 mA, which the Arduino will supply happily, and the transistor will try to make that 100 mA, but again, it will be limited to our 35 mA. In general it's a good idea to have some margin, in case the 5 V would be a bit less, or whatever variations there may be else in the parameters. We have a factor three safety margin, which should be OK.

What about R2? We didn't use that and everything seems to be OK. That's right, and it will be in most cases. When would we need it? If the output low voltage of the Arduino wouldn't go below 0.7 V so that the transistor also would get current when off. That won't be the case, but let's say the output low voltage would stick at 1 V. R1 and R2 form a resistor divider, and if we choose R1 = R2 then the 1 V input would become 0.5 V base voltage, and the transistor wouldn't get any current.

Another use for R2 would be to drain leakage current. Suppose the transistor is driven by a current source, like an optocoupler's phototransistor. If the optocoupler sources current it will all go into the base. If the optocoupler is off the phototransistor will still create a small leakage current, what's called "dark-current". Often not more than 1 µA, but if we don't do anything about it it will flow into the base and create a 200 µA collector current. While it should be zero. So we introduce R2, and choose a 68 kΩ for it. Then R2 will create a voltage drop of 68 mV/µA. As long as the voltage drop is less than 0.7 V all current will go through R2, and none into the base. That's at 10 µA. If the current is higher R2's current will be clipped at that 10 µA, and the remainder goes through the base. So we can use R2 to create a threshold. The dark-current won't activate the transistor, because too low.

Except for this case of current-driven R2 will very rarely be necessary. You won't need it here.

Seems worth mentioning that if you really need to have 2 separate grounds then you do have the option of an optocouple AKA solid state relay. But these are several times more bulky and expensive than transistors (still not bad for a small project) so only use if really needed.

Not the answer you're looking for? Browse other questions tagged transistors relay ground npn or ask your own question.

26
Choosing the right transistor for a switching circuit
1
Why does my NPN circuit only work with a separate power supply?
1
24V proximitiy switch, NPN transistor, Arduino interrupt input
1
Where should I connect power ground and control ground for a switched power regulator?
0
Trying to power on/off esp8266 power with a 2n2222a NPN transistor
0
About power supplies and ground
2
Pull up on NPN transistor (during microcontroller power up)
1
All NPN transistors work the same way?
0
Why is a relay usually placed "after" a pnp transistor and "before" a npn transistor?
4
Shorting NPN transistor base to ground