Is there a fluctuation effect between heat, resistance and current?

So with less current, less heat would be dissipated, which drops the resistance and causes more current to flow, and then again, more current, more heat... It seems like an endless cycle .

Does this fluctuation ever occur in real circuits? Does it stop at some point?

(I am referring to DC circuits, since this would probably be much more complicated in AC circuits)

I believe it's possible to build a simple physical model with the ideas you provided.

In a simple DC circuit, under a constant voltage V and ohmic resistance R it is possible to use the power equation: $$P = V i = \frac{V^2}{R}$$

In this model, we see a transient solution followed by a constant one. But remember this is valid just for small temperature fluctuations.

This could be analyzed in the same way as a control circuit with feedback. From a practical sense, the heating will be much slower than the other effects, so that will dominate the loop equations. As such, it will exponentially approach equilibrium, unless there's other elements of the system that limit its response (ridiculously enormous inductors, state machines introducing delays, etc).

This is something like a PTC thermistor. which will reach an equilibrium temperature.

To get oscillation you'd have to have a phase shift or delay of some kind. You could probably make an oscillator with a mass transport delay having a a heater heat water flowing in a tube which warms a thermistor downstream and increases the heat to the upstream heater.

I don't think this is exactly what you were asking for, but just in case, turn signal flashers depend on this behavior. 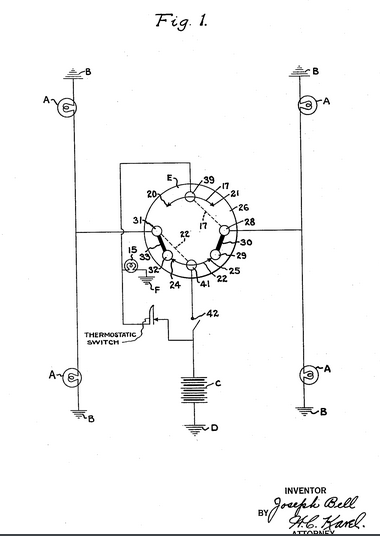 A thermostatic switch closes and opens the secondary circuit. When current flows a metal strip in the switch heats up, expands and eventually opens the circuit. When it cools down it shrinks and closes again.

Some modern ones (especially when low-current LED bulbs are used) are digital/solid state, but lots of cars still use the same exact principle.

That depends on heat capacity of the element. Lower the heat capacity, more like a resistive feedbacked opamp circuit where the temperature will converge. Heat capacity acts like reactive elements and will cause oscillations. Element's heat conductivity (heat transfer speed to outside) will determine if it is going to be damped or diverged.

For the record, I loved Pedro Henrique Vaz Valois' answer and upvoted it.

Said simply: Yes there are transients.

You can think of this in the same way you would an RLC step-function circuit. Apply blow dryer, throw the switch, see transients on oscilloscope, watch flat line appear as all the energy balances out to a steady state. Turn the switch into an oscillating voltage and watch the resistance swing back and forth for as long as the oscillating voltage exists.

And it's a very real problem

One of many reasons why big honking cooling systems are attached to CPUs and other high-density/high-frequency chips is that we don't (we desperately don't) want to deal with heating effects. Resistor manufacturers go to great lengths to minimize the resistance variability in their products.

It's worth your time to read "Non-Linearity of Resistance/Temperature Characteristic: Its Influence on Performance of Precision Resistors" published earlier this year from Dr. Felix Zandman and Joseph Szwarc of Vishay Foil Resistors.

In general no, normally they just gradually tend towards a steady state temperature.

No. The temperature approaches an equilibrium, but does not overshoot it such that it must then change directions and come back.

Consider a resistor that's initially at room temperature with no current.

Then, it's connected to a constant voltage. Immediately the current increases to some value determined by Ohm's law:

It also loses heat to its environment at a rate proportional to its temperature. The size, geometry, airflow and so on can be combined and characterized as a thermal resistance \$R_\theta\$ in units kelvin per watt. If \$\Delta T\$ is the temperature of the resistor above the ambient temperature, the rate of thermal energy lost to the environment is given by:

As the resistor becomes warmer, it loses thermal energy to the environment faster due to an increasing \$\Delta T\$. When that rate of loss (equation 3) equals the rate of energy gain by joule heating (equation 2), the resistor has reached temperature equilibrium.

In the linear regime, this corresponds to a first order equation

And in any case, a first order system does not have a oscillatory mode.

For such a behavior to be possible, a source of instability is needed, such as a negative thermal coefficient, as well as a second differentiator.

Different materials have different conduction properties, including their thermal profiles. That is, some materials will heat up much more than others given the same current flow. This is one reason why components such as resistors have a tolerance.

Actually there was a neat application for this in the olden days. The blinkers on a car were operated by a bimetallic thermal switch. When the blinker light is on the bimetallic heats up and flexes opening the circuit. Then the heat dissipates, the switch cools and closes again.

Not sure if all cars still use the bimetallic switch, but I'd guess that some now use computer control.

Not the answer you're looking for? Browse other questions tagged current resistors resistance heat or ask your own question.

8
How to calculate suitable dummy load for a power-supply?

5
Relationship between frequency and current
3
Design of a nichrome heating element - achieving predetermined power dissipation
4
Understanding current, voltage and resistance
0
Current decrease in a lamp due to the change in scale of an analog ammeter
1
Would lower current cause a battery to go flat slower?
2
Heat and small appliances
0
Understanding a failing transformer
1
How can a current be constant and there still be a voltage drop
20
Why does the resistance of a space heater decrease as it gets hot?