I would like to run one 12 core cable (as seen on this link) though a conduit. 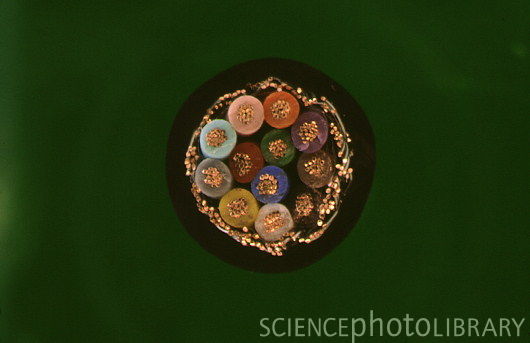 Would I be able to connect two RJ-45 Connections to the two ends? I know that Twisted pair cable would be better, however i would like to know the minimum cores required (since i expect that i could use some of the cores as a common earth?)

I would not like to use a switch or hub on the other end. Is this idea viable, and are there alternative suggestions? in essence I do not have space to run two coaxial cables in the conduit..

Simple Answer: No. It won't work. Not even close.

There is a lot more to Ethernet, Cat-5 cables, and networking than just having wire that connects Point A to Point B.

Cat-5 cable is made from 4 pairs of wire, with each pair twisted in a very specific way. Each pair is twisted at a different rate from the other pairs, to control the crosstalk between pairs. The insulation dielectric and thickness is carefully controlled, along with the twist rate, to control the impedance between the wires. Cat-5 (and Cat-5e, and Cat-6, etc.) has very specific specifications that must be met to be called Cat-5.

What you are calling "12 Core Coax" does not appear to be coax at all, using the traditional meaning of the word "coax". Rather, it appears to be normal 12-conductor cable with a wire braid shield. The link you provided has no specifications on things like twist rate, impedance, crosstalk, capacitance, bandwidth, etc.

Your first question, "Can I use this 12-conductor cable for Ethernet?", must be answered with a no. We have no way to compare Cat-5 with the cable you want to use. Your cable has no specs, while Cat-5 has very specific specs.

Next, you mention using some of the "cores as a common earth". Ethernet is transformer isolated at both ends of the cable and thus does not have a "common earth". If you want to get super technical about things, each pair of wires is in essence its own common earth. But don't read too much into that because you'll just get more confused.

I know what you're probably thinking at this point. You're thinking that you are only running slow-old-100-Mbps-Ethernet and all of this impedance controlled, twisted stuff can't be that important. And that you'll just chance it and run 100 Mbps Ethernet over the "12-core Coax" and hope for the best. I have talked to many people in this same position. People who ignored the advise of experts (not just me) and tried to run Ethernet over non-standard cables. All of these people have deeply regretted that choice-- in some cases they "lost" thousands of dollars in rewiring costs, and in other cases they lost their jobs. Don't do it!

But here is one solution that might work for you (and I have actually done this with success): Use standard Cat-5 or Cat-5e cable and run two 100 Mbps links over it. Two pairs for the first link, two more pairs for the second link. To make things better, Cat-5/5e cable is probably a lot cheaper than that 12-conductor stuff you found. Just make sure that when you select the wires for each pair of signals that you actually select pairs of wires! Just taking a Cat-5 cable and not paying attention to which wires are twisted together is guaranteed failure.

While it likely wouldn't be possible to use the cable for wired Ethernet (802.3), it may be possible to use it as an antenna for wireless Ethernet (802.11). This would involve crafting an adapter to connect the AP to the cable, and then trimming back the shielding far enough to allow the EM waves to be emitted from the wires at the other end (I don't quite have the math for how far though). This probably won't give you 802.3 speeds, but it should give you 802.11n at a distance that far exceeds the wireless specs (due to the added length of the cable).

Not the answer you're looking for? Browse other questions tagged cables cable-assemblies or ask your own question.

0
Using Ethernet wires for DIO
3
Passing USB signal over short SATA cable and connector
4
CAN Bus Physical Layer Twisted pair or not
1
Single cable for dual Ethernet plus power (PoE)
5
Attaching Cat7 (S/FTP) Cable to PCB
5
Does a twisted pair cable radiate more EM radiation than non-twisted pair?
0
Extending signal cable
15
Is there a low-cost alternative to RJ45 cables for large number of signals?
4
How should I connect the audio ground and shield wires in a Cat5 cable for analog audio?