Use solar cell to power and communicate with chip in IR

I have a slightly movable (torsional (freely for infinite degrees around the z-axis) and translational (+- 40mm in the xy plane)) microcontroller in communication with a fixed one. I'd like to use it without having a dedicated battery. Cables would transmit too much mechanical force (own weight, spring-action), coils would pick up too much noise and require ac/dc conversion in the mobile component, so I was thinking about using a solar cell on the mobile component for power, and either a dedicated TX/RX part, or to solve the RX with the solar cell as well (there won't be much communication, so the (off-)duty cycle won't be much of an issue)

There are multiple papers about the principle, but I am stuck on a practical issue: the mobile component will need about 20mA @ 3.4V (~0.07W) continuously, and i cannot find the values i need to compute whether this is feasible in a small package.

A silicon solar cell has about 10% efficiency, but that is for full spectrum sunlight, and I would be using an LED at 950 nm (because silicon solar cells seem to be more efficient there - only some sources say the reverse, which might be due to NIR not having the most energy in sunlight -), and I’d ballpark an LED at 50% plus the solar cell would only get half of the light at any given moment, to account for movement, so I’d have to power the LED (array?) with 40*20 mA=800 mA, which seems a lot.

Also, I cannot seem to find upper limits for radiation densities for small-spectrum light on silicon cells (amorphous? Crystalline?) - is it the same as for full spectrum, ie 10000W/m2 ?

Alternative power conduits are welcome, but my main focus is on scaling the LED(laser?) and solar cell.

EDIT: there will be plasma cutting and arc welding going on in the near vicinity, which is why i thought coils were out. The welding and cutting equipment is not related to the project i am talking about here, so neither can i use the resultant light, nor can i use the infrastructure (cables). The MCU itself is shielded, and has functioned properly. Currently it is powered by a small lipo unit i got from a minicopter. I experimented with the coils from an electric toothbrush, but got bad results for the translational movement (did not try with welder on ). Movement is +-40mm in xy plane, and torsional movement is constrained to the x-axis. air gap of >50mm would be nice. There is no MCU is 10g, shielding is another 12g (though i'll try to shave that down as soon as i get my hands on thinner metal sheets), lipo is 7g

Both arc welder and a plasma cutter require fairly thick power cables and gas hoses. Compared to them the stiffness of the power + communication cable for MCU is practically non existing.

The second thought is that arc welder produces very strong EMI, which will affect MCU and communications without proper shielding (adding more weight to the movable part)

So, my first suggestion is to consider using single STP cable for both power and communication. Note, that the cable should not go straight between those two points 10 cm apart, it should loop sufficiently to support possible need for equipment separation, maintenance or introducing additional nodes into communication. Which coincidentally makes stiffness of the cable less important.

A second suggestion can be used if arc welder is a movable part and if it uses AC current. In this case you can put a core with a coil (current transformer) around the welder cable and leech power right at the end, sort of point-of-use power supply.

The third suggestion does not require AC welding current but it does depend on your definition of "slightly movable". If you are talking about several inches then you can use toroidal transformer with air gap between the core and one of the coils, big enough to accommodate the movement, as in the picture below. 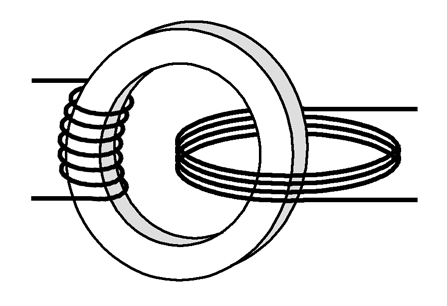 Also, if you still want to explore solar cell solution, note that you don't need light emitting part at all. The brightness of an ark and plasma is way more than you can achieve with any kind of LED.