What I want to do is make a low pass filter using a simple RC circuit (first order), or possibly an LC circuit (which would be second order). Right now, I am in the process of determining the values for the resistance of the resistor and capacitance of the capacitor (I'm currently going with the RC circuit idea). As the equation is f=1/(2*piRC), I understand that if I want a crossover frequency of 200Hz, I will have theoretically infinite choices or R and C. Which values are better to choose? I've heard I should choose C first, because capacitors are more difficult to find in the right denomination. Still I am left with a few hundred possibilities.

Also, is there a best choice of type of capacitor? (electrolytic, etc)

My application, if needed, is that I want to filter out high frequencies of sound from entering my car sub woofer (powered by a 70 W amp), so I'm going to put the low pass filter between the amp and sub woofer (I would put it upstream of the amp, but in this case, the amp and head unit are one in the same device).

I understand that if I want a crossover frequency of 200Hz, I will have theoretically infinite choices or R and C. Which values are better to choose?

Think about what the input impedance will be to the RC low pass filter when the input signal frequency is much, much higher than 200 Hz - the capacitor can be regarded as a short circuit and this means that the input impedance is simply "R" and, if you decide that you cannot live with an R value lower than (say) 50 ohms, your capacitor has to be no greater than 16 uF.

So, decide on input and output impedances and constrain your design to these requirements.

It's likely that a simple RC will not do the job because your sub-woofer will have a loading effect of maybe 8 ohms and this means the resistor value will need to be at least one-tenth of this value. With R at 0.8 ohms, you will have problems when the input frequencies are high because the input impedance becomes 0.8 ohms.

Using an LC circuit is what you need because as input frequencies rise, the inductor impedance rises with them and doesn't create a stupidly low input impedance that your amplifier has to try and drive into. Try this type of circuit: - 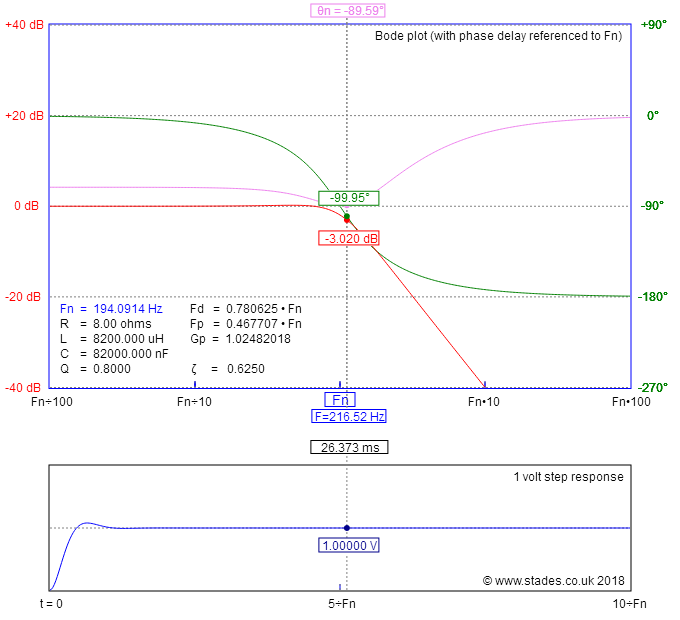 The cut-off frequency (3 dB point) is 216 Hz and has values that are not too far from specific calculators for cross-over units you can find on-line like this one: - 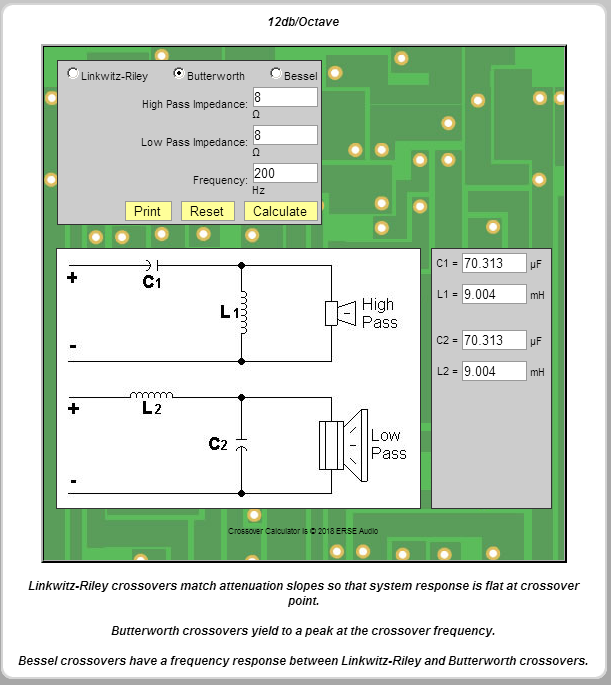 If you need to place it before the speaker, go for LC, any R (be it RL or RC) will give you voltage drop and useless power dissipation, not to mention less attenuation. Also they'll have to have a (much) lower value than the load, so in the range of \$\Omega\$, which means the C will turn out very large, and the resistor will have to be of great power to accomodate the losses, which also means it'll probably be wire type, which means it will have large parasitic inductance, which means you're better off using an inductor.

I assume the driving is done by a typical audio amplifier, thus voltage driven, thus low output impedance(?), so you could calculate your filter based on the data you have. Since the measured resistance is 3.3\$\Omega\$, you can deduce that the impedance is 4\$\Omega\$ (edited formula):

which will give you a Butterworth type of filter (also prefered for its flatness). If you need some cross-over, then Linkwitz-Riley will be preferred, but not mandatory, and then replace \$\sqrt{2}\$ with 2. Your choice(s) are, basically, any all-pole 2nd order filter is up for picking, not necessarily the best for the job, though.

The inductor will have to be made without a core (air core), to avoid nonlinearities, and with a wire that supports the maximum RMS current (it may turn out bulky), while the capacitor needs to be nonpolarized -- these tend to be more expensive so you can "cheat" by placing two polarized caps in series, with common + pin. You may also need an additional, small valued resistor (but higher power) to make it a lowpass RLC, for damping purposes, or for load matching, unless you get the LC values right, in case it's needed.

Not the answer you're looking for? Browse other questions tagged capacitor resistors filter passive-filter or ask your own question.