BQ24133, unable to charge the battery

I have designed the circuit around BQ24133 and in my humble opinion, chose the right components while following the datasheet. I had the PCB made, soldered the components and started testing. The next picture show the schematic from the datasheet: 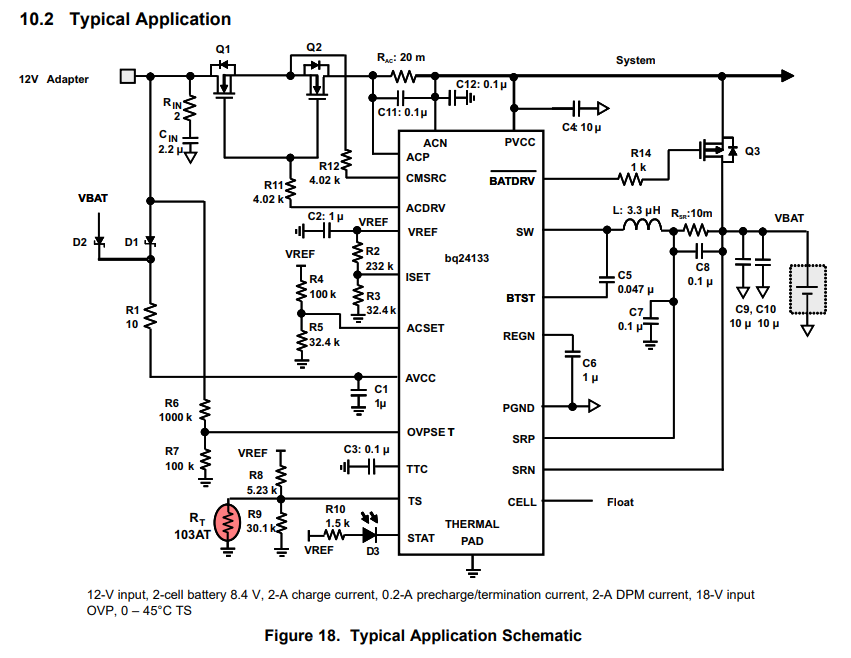 At first, nothing worked. I knew the reason...an assistant profesor at my college, who has little skill in soldering, told me to tin the pads first, place the ic on the pads, we placed it in the PCB oven and I was sure the chip didn't solder properly on the PCB. I know that this procedure is a legitimate one, but I had the solder paste and didnt't know why he didnt want me to use it...

Also had to desolder one resistor (R6) conected to OPVSET, because originaly I made a mistake connecting it to the VREF and not to the input 12V adapter. I desoldered it and soldered a through hole resistor betwen 12V and OPVSET as seen on this picture. I also soldered a LED to STAT to see everything. You will also see that I used too small footpring for the 10uF caps, but i soldered them anyway and tested them with continuity. All in all, not my best work. 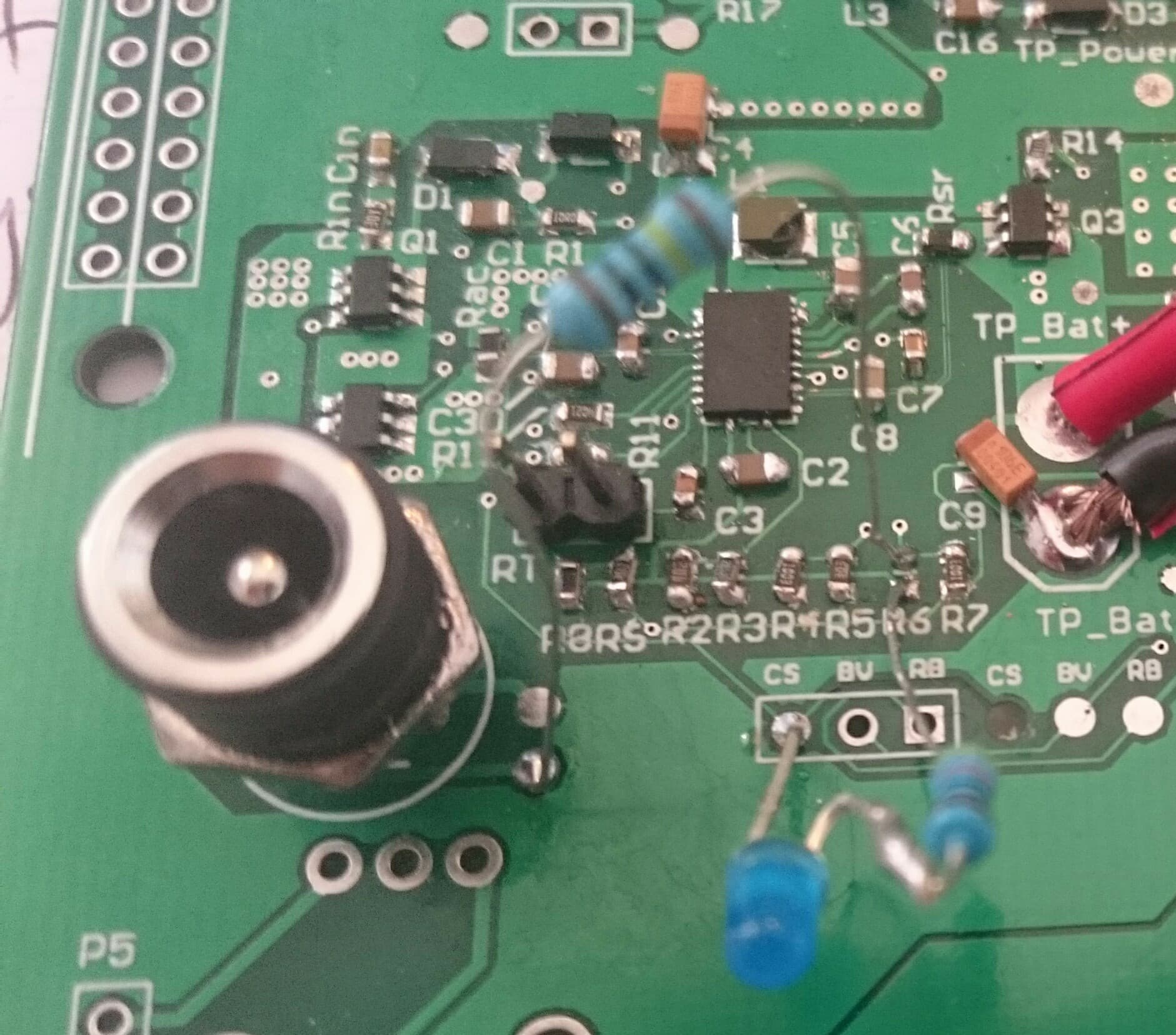 After that, everything worked, but the battery charging.

I also used NTC thermistor and its voltage was ok.

Every measured voltage was within its limits by the datasheet.

This is my schematic (where I corrected the OPVSET resistors): 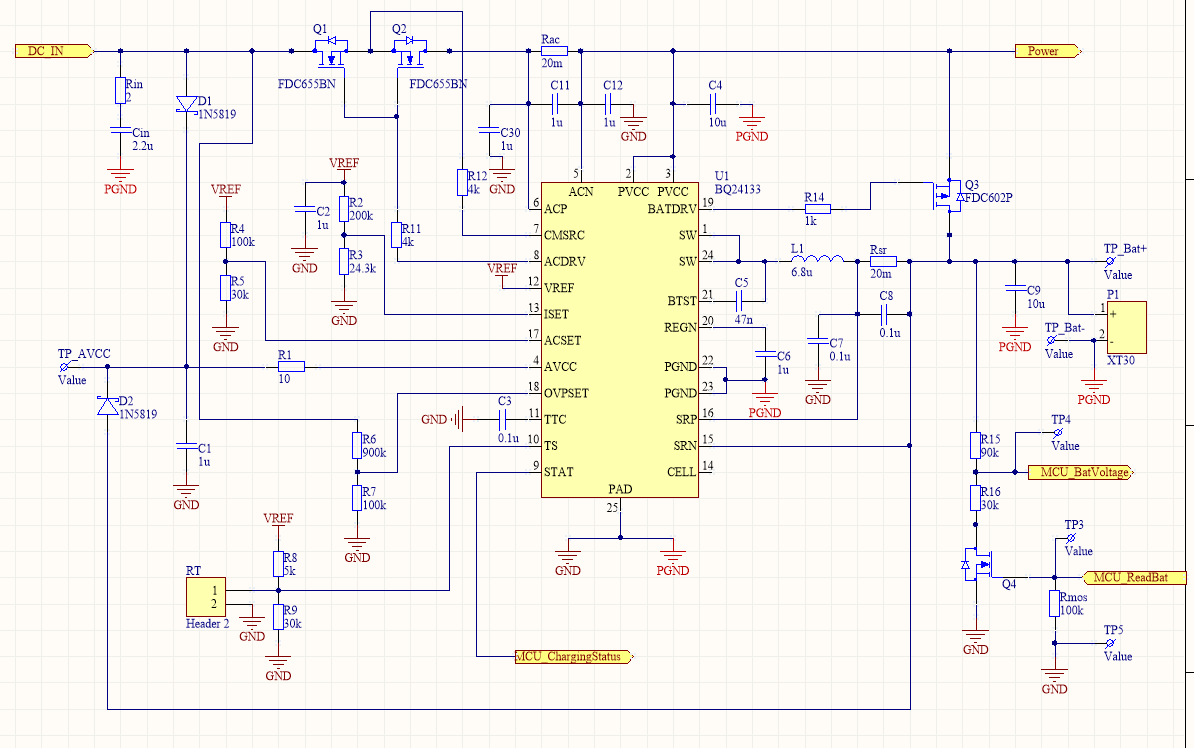 The led was on when everything was connected (see page 23, Table 3. STAT Pin Definition in the BQ24133 datasheet). I disconected the thermistor to see if led would blink...and it did. So everything should be ok, battery should charge. but there was no current going in the battery.

Yesterday, I accidentally shorted the Rsr to the GND and burned it. I dont have a replacement. I also bealive I have burned the IC with my fingers because I'm not grounded. The LED dosent work anymore (the LED works, but the STAT pin doesnt). BUT, I still get 3.3V at VREF, I get 7.13V out when adapter is not present, and 12V out when adapter is present.

I'm making another revision of the board and ordering more components, so I would like to know why dosen't my battery charge.

Quesiton: Why dosen't my battery charge? Is there something wrong with my layout or components, do I need to change them?

3
How many times can an IC be desoldered and resoldered?