Why is the magnetic field around a bar magnet represented by iron filings?

Why would we use iron filings to display a magnetic field interaction and then teach this as the unaffected field of a magnet?

Iron affects the field itself. This is analogous to an observer affecting a quantum event through observation.

Magnetic mappers that contain iron anywhere near the proximity of the target to be measured are inherently outputting false field information.

Where are the true examples of unaffected fields? Could they really be different than what we have been taught?

There's a general problem in physics that you can't measure anything without changing it. Any attempt to introduce a measuring instrument into an experiment changes the experimental setup, and so alters the results.

So the aim is to choose a measuring instrument that changes the results as little as possible. For example, a voltmeter is designed to have as high a resistance as possible, so it doesn't add any significant load to the circuit it's measuring.

In the case of iron filings, they are small and either not magnetised, or are only weakly magnetised. The bar magnet, on the other hand, is much bigger and strongly magnetised. So we assume that the iron filings have only a small effect on the field that they are measuring.

You can make any effect smaller, by limiting how many filings you use. Just sprinkle a few around, and they will have little effect. Dump a whole jar full of them on top of the magnet, and you probably have completely changed the field you were measuring.

Yes, the filings affect the field. No argument there.

I think the value of this experiment is that physical objects which are familiar, iron filings and a magnet, are used to show the effects of something you cannot see.

Further, I would claim that because the filings line up with lines of flux, they do not change the shape of the pattern of flux lines. Because the medium, scattered with iron, is more permissive than air the bulk of the lines should trace a path closer to the magnet. I understand you to be correct in observing that the field is changed.

If magnetic mappers can measure the field without changing the permissiveness of the medium (usually air), then the affect of the measuring device can be compensated for or ignored.

There is simulation software that draws lines of flux on the screen for you. These are capable of mapping complex fields and (as I have no experience) presumably are able to simulate behavior of complex problems as to assist in designing a solution to a problem.

Brushless motors are popular in model airplanes. This one has a 6 pole stator and an 8 pole rotor. 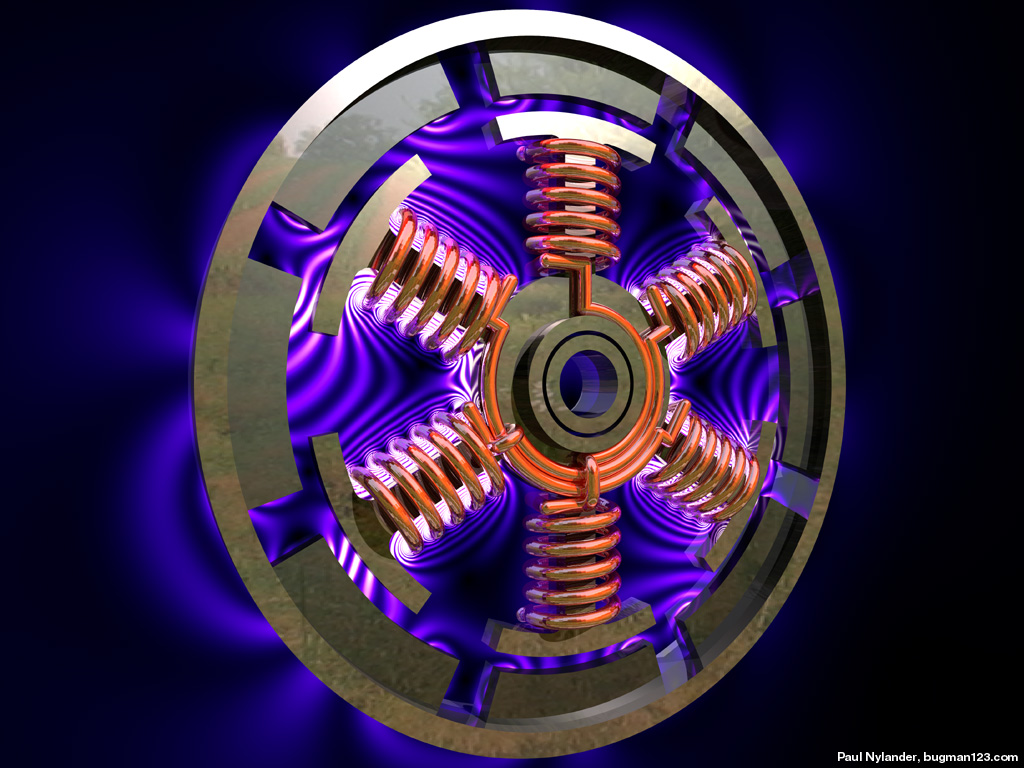 Could they really be different than what we have been taught?

(I can't say anything about what you have been taught. So I must broaden your question into "Could [X] really be different than what modern theory says, as interpreted by those people most informed on [X], and where applying modern theory about [X] to deduce specific experimental results?")

It's always possible that our modern set of highly interwoven (and in many cases, overlapping too) physical theories will be dispelled by some new set. But as they exist today, they do explain observations quite well and over a very wide-ranging set of circumstances, too. And that's a tall order.

While it cannot be totally discounted, it is still very difficult to consider a way to replace existing modern theory. Partly, because it is a well-integrated part of a larger and tightly interlocked set of physical theories. In fact, this is perhaps the defining characteristic of physical science knowledge -- it's unity or unifying nature. Each piece supports other pieces, while itself receiving support from other pieces.

An analogy here might be how the stones of an archway can be designed to carry a very heavy load through the way each stone in the archway lends support as well as receives support by other well-placed stones. And this is unlike most other forms of human knowledge, which tend to be more as like stones unearthed and cobbled together into a wandering "farm wall" of loosely connected (if at all) stones. In science, if you "blow out" one stone, pretty much the entire enterprise comes down in a sudden collapse. In "common knowledge" you are almost completely free to "blow out" one stone of the farm wall, and no one else will care that much because it does NOT impact the rest of the loose collection of stones making up that farm wall. The stones far away don't support stones "here" and the stones "here" don't support stones in the farm wall that are far "over there." They are all mostly unconnected bits of knowledge.

But physical science is quite the opposite. It's highly interwoven. That's its source of power and strength.

It may be fun to wonder, "Could this be different than what theory says about it?"

But any affirmative answer to that question cannot be made without first recognizing that the question fundamentally also requires the replacement of the entire structure of interlocking physical theory, today. So the question is either a very, very big one requiring the replacement of most of today's physical ideas or else one that can only be answered as "No."

Where are the true examples of unaffected fields?

Well, this implicitly asks if there is "Truth" (in the capital-T form of the word, meant to imply "Ultimate Truth about Reality") that we can ever know. I would assert that we will never know the ultimate truth. No matter what theories we have, there will always be deeper questions. And we will never have a moment when we can say, "We know this is the Absolute Final Truth and it Will Always Be True no matter what evidence the future may bring."

Science must admit it cannot predict what evidence might arrive in the future or how such evidence will shape our understanding. No law is immune to future experimental evidence. End of story.

So we will never know Truth, in the capital-T variety. But we can know truth in the small-T form, where such truth is a matter of our current understanding and always subject to what the future may yet bring us.

For unaffected fields, you simply apply theory, deduced to some specific circumstance, and plot out pictures as you see fit from that. You can "measure" the results of theory without impact of measurement, so long as you avoid the level of quantum effects. (At that level, no measurement system can be devised to avoid fundamentally impacting the measurement. All experimental results become a matter of the entire system then and cannot be arranged to be independent of the experimental setup.)

Maxwell's equations are pre-relativity and can be completely replaced without the use of "magnetic field" as a separate entity. This is why what used to be "electric force" and "magnetic force" have since been combined into a single entity, "electromagnetic force." It's a broad brush that covers both relativistic and non-relativistic perspectives. That said, the conventional (pre-relativity) ideas of a magnetic field work quite well and are usually easier to manipulate in our minds.

So, the idea of a magnetic field remains a very useful fiction.

What is a "true example" of a magnetic field?

I guess I don't know, anymore. It depends on what you mean by the question.

Not the answer you're looking for? Browse other questions tagged magnetics magnetic-flux magnet or ask your own question.