Here is what works:

Here is what I'm trying to do (doesn't work, hence question):

The "equation" to solve is thus:

Solve for X and Y

I'm working with a bunch of sensors configured in a star network/topology. 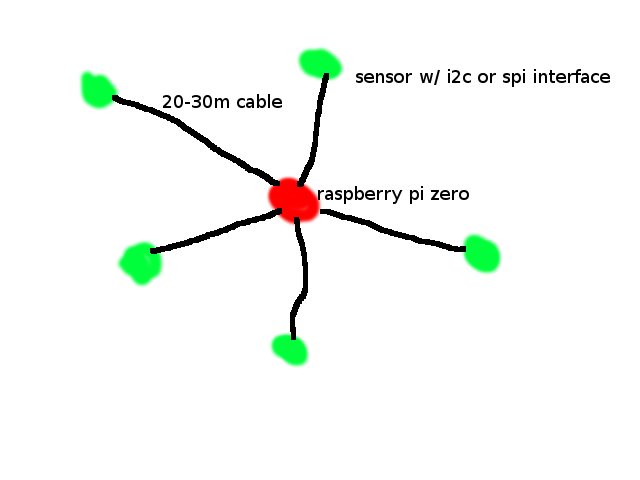 Having the proof of concept in place, I now want to extend the reach of the star network/topology by 20-30 m on each sensor-hub connection. I thought I could just use longer wire, but apparently the I²C protocol limits the length of wire extension. I've read various tricks/solutions on how to extend the length, such as lowering the frequency, changing resistors, etc.

I'll be honest; I'm not an electrical engineer, so some of that stuff seems a bit more advanced, and I don't really have the knowledge or tools to assess the effectiveness of those types of altercations.

Anyway, I've done some digging, and I've found various chips I can potentially implement as more of a "plug and play" solution. That being said, much of the material I read was from years ago, and I don't know if those solutions are still viable. Here are the chips I've found

Comparing the two, I've read the first item is more versatile. I've also read the second item is older and requires a lot of power, making remote deployments (battery powered) less practical. I recently came across another solution, where you use an I²C to 1-wire converter since the 1-wire protocol isn't as sensitive to increases in wire length

This seems like a potential solution, but I haven't heard much about it being used by others. The only source of information I got was from the company webpage and videos. If I read the datasheet correctly, the solution doesn't require much power either. I'm wondering if others are buying what they're selling and if it works?

Anyway, again, I'm not an electrical engineer, so I could really use some advice. It seems like the I²C protocol is what a lot of sensors are using (at least the DIY embedded market), so I imagine I'm not the only one facing the issue of extending the I²C communication.

Here are my solution requirements:

EDIT: I've done some more digging over the weekend and I've come across this chip set (MCP25*), which sounds like a CAN-to-SPI interface. THIS WON'T WORK...SEE @Maple's comments below. I'm certainly not saying that's the only chip set offering this conversion, it's just the first one I came across. The sensors that I'm using do have a SPI bus interface, so I think I might be able to directly connect one of these chips to each sensor? I only have 5 sensor nodes connected to the Raspberry Pi in my star topology, so I believe I'm well within the constraints on the number of nodes the CAN bus can support. The question would be then how to configure the rest of the bus. Would I simply connect one end of a Cat 5 cable to one of the CAN-to-SPI chips? The wire would then run 20-30 m to the Raspberry Pi. Could I then add one more chip at the Raspberry Pi to "invert" the conversion an communicate with the Raspberry Pi? Would there be a way to connect all five nodes to the same interface/chip? I don't think the Raspberry Pi has a native CAN bus support, but obviously does have SPI (I think you can only connect two devices?). If those chips could be added on the sensor nodes, what would be needed to interface the Raspberry Pi?

EDIT_2: After gathering further knowledge from everyone's feedback (thanks), I decided to keep digging. To no surprise, I came across yet another potential solution! I was reading through the comments on one of the links I pointed to above, and someone mentioned a PCA9615 chip. A quick Google search on this chip introduces "differential I²C". From a layman point of view, this sounds like a solution which wouldn't require me to change my software. Aside from that, I don't fully know the pros/cons or if it meets my three requirements listed. I will read further into the datasheet, but if anyone has feedback on this solution, I'm all ears!

The Onewire solution with the DS28E17 is the one which works mostly out of the box. You may even use the bitbanging host (e.g. on GPIO4) and get away with almost no extra hardware. Each DS28E17 on the bus is automatically appearing as an I²C host adapter, no software changes needed. Drawbacks:

Forget about the DS2484 behind a DS28E17 idea. That simply squares the overhead so much sending a few bytes takes a second or so. (DS28E17 behind a DS2484 or DS2482-800 in contrary is the intended use and avoids bitbanging.)

The reason that chip isn't much used by other people yet is it came out just in 2016 and the Linux driver is available just since kernel 4.15.

I suspect there are other kinds of I2C extenders but I am only familiar with two - buffers (like PCA9605, P82B715) and splitters (like PCA9600, P82B96). They all designed to isolate higher bus capacitance of the long runs by increasing sinking capability of the outputs. It seems the buffers all approaching EOL now.

Note, however, that increasing sinking capability basically means increasing currents, which does not bode well with your requirement of low power consumption.

There are many application notes that I'd recommend reading, like already suggested by @ali-chen AN11084 or AN11075, AN10658. Interesting though, that even those of them that use twisted pairs in their topology still rely on single-ended signalling. I am pretty sure that whatever application note or device you would choose should work well.

What I would like to suggest though, is taking a look at this device first. They describe it as "PCA9600 extender". However buried deep inside the technical description you can find clever use of CAN transceiver chip PCA82C251 to transform I2C signals (split to Tx, Rx by PCA9600) into differential signals.

The above already has an advantage of high noise immunity without any shielding. And it can give you high speed communication over 100 m distances. But here is another trick for you - CAN bus can operate at 3.3V with same speed and reliability as at 5V, while at the same time reducing power consumption by more than 50%. I think this justifies a closer look for your application.

This NXP note outlines methods to get I2C bus system to over 300 m long at 60 kbits/s, AN11084. The solutions include twisted lines, PCA9605 repeaters, and delay-generating logic at each slave. Good luck.

I also argue to look at this. https://en.m.wikipedia.org/wiki/Low-voltage_differential_signaling

It is immune to common mode noise, independent of ground connection and also runs for a few 10s of meters easily still providing high bit rate compared to I2C standard.

If you can provide the schematics it block diagram of intended connection, a better scheme can be worked out to lower power consumption further.

M LVDS (multi LVDS) can be the right candidate. You can use individual channels for I2C clock and data.

Data line is bidirectional but possible to handle via arbitration.

Not the answer you're looking for? Browse other questions tagged raspberry-pi i2c communication can 1-wire or ask your own question.

7
Arduino: Reliable and practical way to connect an I²C device (1 m away)