Rated vs. actual power usage of a linear fluorescent lamp

After having some power issues, I've decided to investigate the largest power drains in our company, and I've arrived at a realization that 128 lights adds up to a lot of power (and that's not even all of them!).

Overall, I'm looking at the feisability of replacing all lamps with LEDs, but I'd like to avoid surprises of actual power usage being significantly higher than rated. As I started calculating the power usage, I've realized that there is a fairly large difference between the actual power draw and rated power.

The measured current at the grid connection was 0.31667 A / lamp - lowest result was used as "currently most efficient", though there might have been a busted lamp among them. Measurements were made in different areas for reliability and I made sure all other power users were accounted for. In this case, all lamps are linear fluorescent lamps, T8 58W 150cm, using starters.

Using the "standard" 220 V, I get the following result:

However, both are a far cry from the lamps' rated 58 W

Am I calculating something wrong? Is the discrepancy due to lamp deterioration or starters? Is there something else obvious that I'm missing?

I'm no expert and although I'm well aware that A * V = W isn't how it always works, I presumed that it should be accurate enough for lamps.

Also consider that many LEDs can bring up the power quality problem. LEDs are bringing higher harmonics to the system, and cutting those out may need designing a low-pass filter. [1]

If you want to read more about Power Factor correction, you can look at [2].

Also your electricity provider may want to measure the power readings from time to time if it's a company building, and if it discovers that you're flooding the grid with harmonics high fees may be brought up on your company, as you're decreasing grid power quality.

Power Factor must be taken into account in AC power systems:

Voltage can vary during the daytime, so both the values you wrote could be correct.

No, that's not power that's current. If you want to measure power then use a wattmeter. Reason: power is voltage x current and if the phase angle between voltage and current is not zero (unity power factor) then measuring current will give an over inflated perception of power (assuming that your voltage supply was fixed at 220 volts).

However, you know that if current goes down significantly when you replace one lamp with LEDs, then in all likelihood power will also reduce. So just get your boss to sign into changing one lamp and get one of those cheap watt meters you can get off ebay and set up an experiment.

LEDs will win every time so don't delay - do a single experiment, tell your boss the results and calculate payback period. Then hopefully you'll see enough evidence to convince your boss to make the big change: - 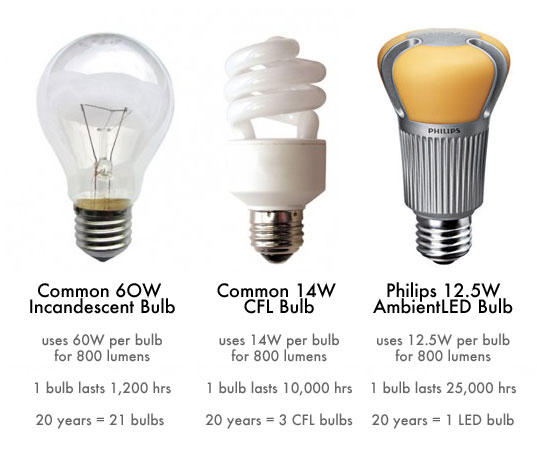 Modern tri-phosphor tubes 4500’K to 5000’K “can” be as efficient and better CRI than cheap LED lamps 88LPW but both better than incandescent 15 LPW.

The simple quad magnetic ballast is not constant current as you assumed incorrectly. T5’s x 4ft use 28W while T8’s may be 32W and expect 2800 lumens from the best.

There are many choices in better lighting and cost may be a deceptive measure of “better”. Educate yourself in Lumination Engineering if you wish to be wiser.

It is easy to retrofit but use the more expensive triphosphor tubes rated for 30kh using 1 switch cycle/day or 50kh is continuous. Your eyes will appreciate the contrast and reading improvement.

It's really not about wattage of the light source, it's how much light are you getting per wall watt.

For efficiency light sources for general lighting will have an efficacy rating in lumens/watt. Your common everyday T8 58 W linear fluorescent triphosphor bulb delivers about 80 lm/W minus diffuser panel transmittance loss, and directional loss (light going in to the ceiling).

What type of lighting depends on whether it is an office, retail, or manufacturing setting and ceiling height. 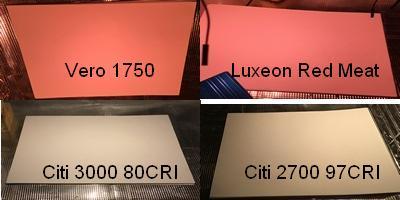 Then there is the color rendering index (CRI typ. 70-90) which indicates the quality of the light and how closely it approximates sunlight (e.g. CRI=80). Higher is better and more expensive. 80 CRI is middle of the road. 90 CRI contains more of the red spectrum.

The upper half of this photo is low CRI the bottom is high CRI. 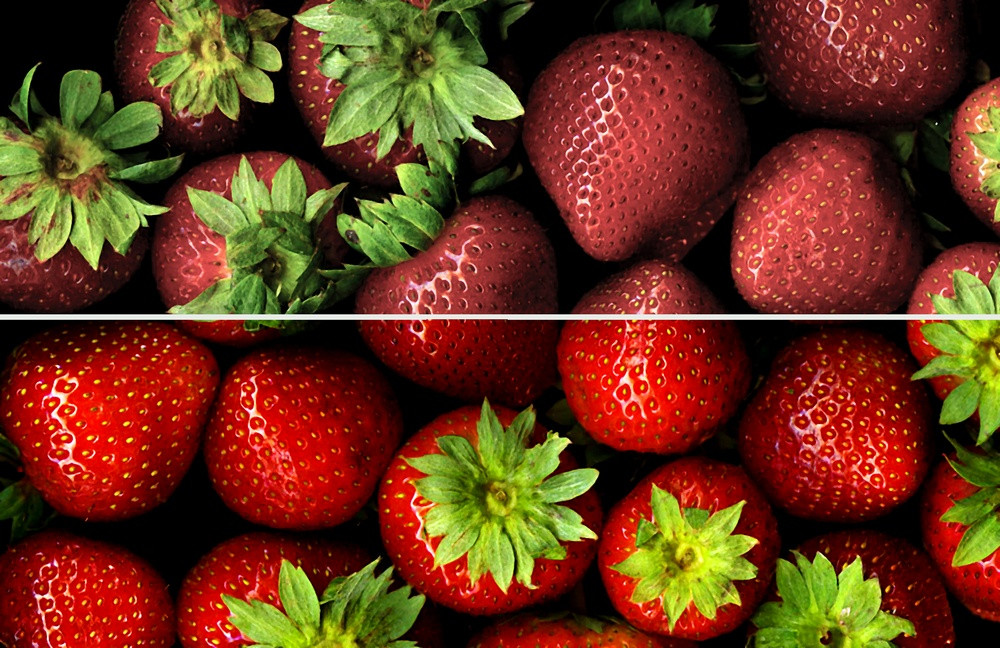 The problem with comparing LEDs to light bulbs is that an LED is nothing like a light bulb. The biggest issue is the lumen measurement. Because light bulbs are an isotropic light source (radiates light equally in all directions) lumens works well. Lumens measures the total light exiting the light bulb in every direction.

LEDs are an anisotropic light source meaning the light exiting the source does so in a directional path. This means you can point LED light in a particular direction where the lumens are concentrated in a smaller area. Linear fluorescent tubes will also have a reflector that attempts to redirect the light towards the area to be illuminated. Some of the illuminance is lost or misdirected with the reflectors.

The graphic below represents a typical anisotropic LED. If it were an isotropic source the lines from the source would be equal in intensity and cover the entire circle. 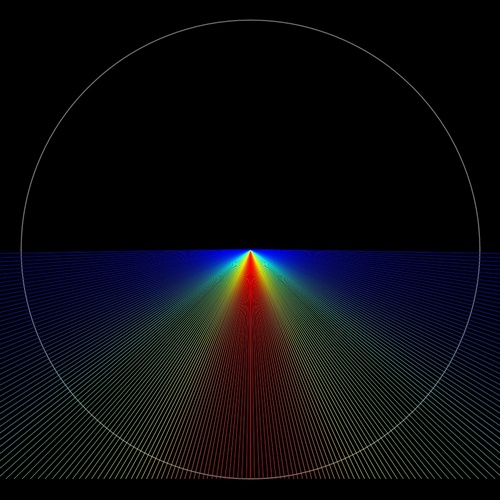 LEDs fixtures have the dimming advantage. If you don't need as much light as the fixture outputs, just dim it and save. Can improve ambiance as well.

Linear fluorescent's efficacy does not include the diffuser panel which can block up to 80% of the light. Diffuser panels will have a transmittance rating which indicates the percentage of light that goes through the panel and is not reflected or absorbed. A clear polycarbonate panel will have about 95% transmittance. 40% transmittance for milky white diffuser is considered good.

When LEDs get hot they produce less light. When LEDs are concentrated in a small area as is done in a light bulb. An individual LED bulb needs it own power supply and LED driver which lowers efficiency and reliability.

I now use strips of many inexpensive mid power LEDs where the LEDs are spaced about 10mm apart with a 45V forward voltage.

I use highly efficient and reliable Mean Well HLG 48V drivers with power factor correction. I use 48V because it has higher efficiency than lower voltage drivers. Also the reason I have 45V strips.

For good looking fixtures I like the Klus Design Fixtures and Extrusions to house the strips. They have a lot of nice hardware for installing strips in ceilings, walls, floors, in hand rails, stair steps, under cabinets and counters. 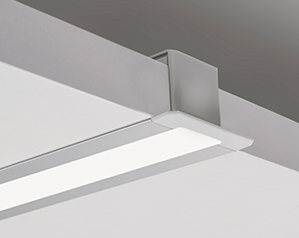 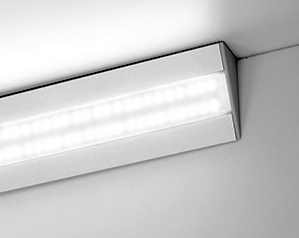 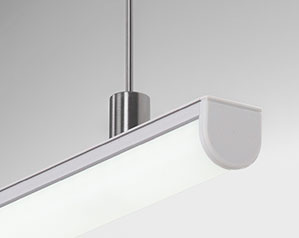 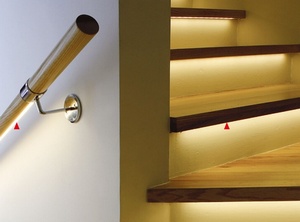 Below is a 560 mm strip (circled in white) sitting on top my 55" monitor facing upwards so the light is diffused by the ceiling. It is drawing 17 wall watts including the HLG-40-48B driver. It is positioned 40" from the back wall.

You can see the directional intensity. The LEDs are pointed straight up. Directly above the strip (the top edge of photo) it is brightest. The illuminance decreased on the back wall as the light angle changes (there is no back to the bracket the strip is mounted on.

If you click and zoom in on the light you will see what appears to be a blue power indicator in the center of the strip. The strip is screwed on to an aluminum angle bracket which is covered with blue electrical tape. 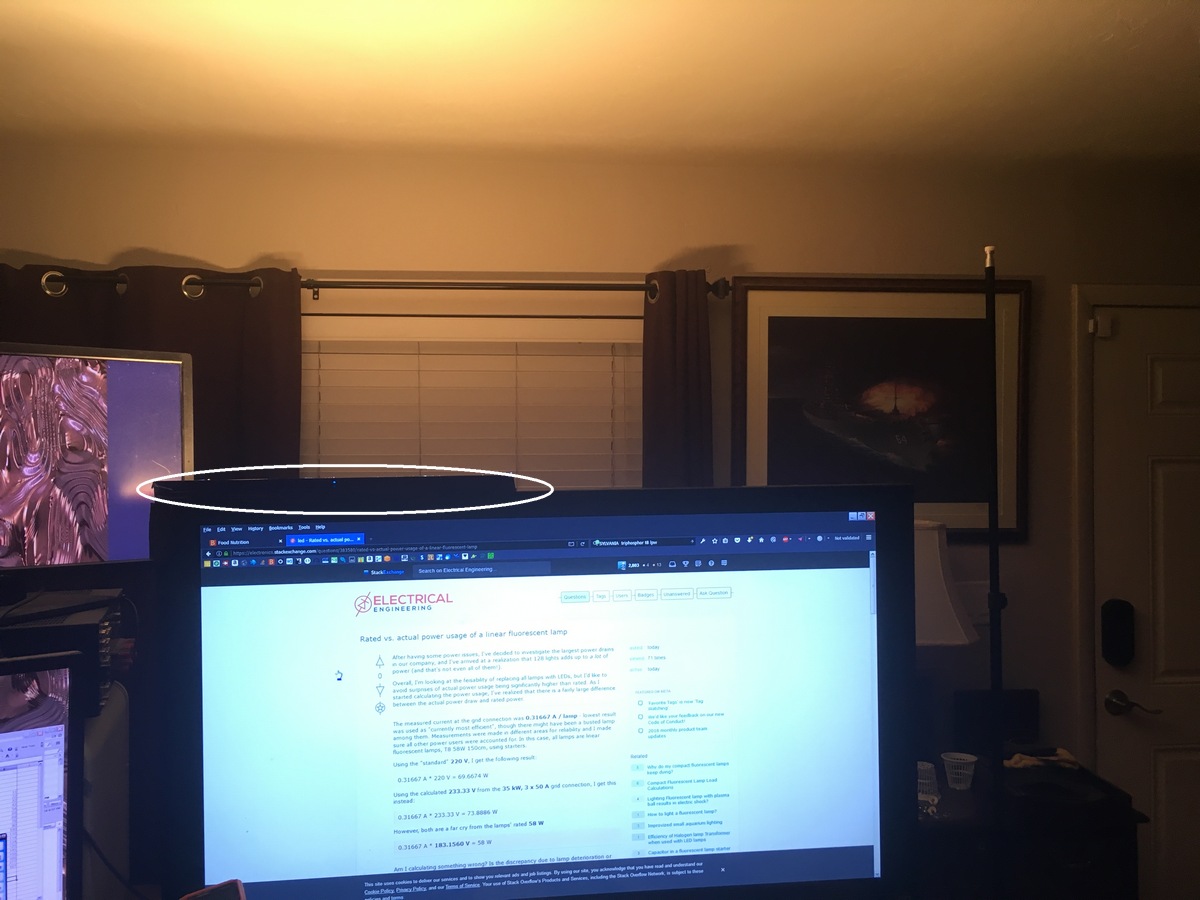 Below is a Samsung F-Series Gen 3 strip with a Klus micro-ALU extrusion rigged up as a temporary plant light. 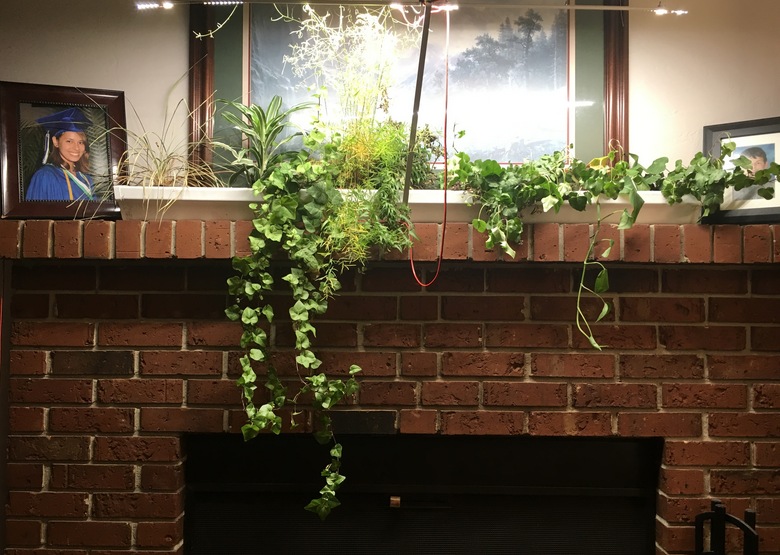 Not the answer you're looking for? Browse other questions tagged led light efficiency fluorescent-lamp or ask your own question.

5
Why do my compact fluorescent lamps keep dying?
6
Compact Fluorescent Lamp Load Calculations
3
Improvized small aquarium lighting
1
Efficiency of Halogen lamp Transformer when used with LED lamps
4
Capacitor in a fluorescent lamp starter
1
How can a fluorescent lamp run without a ballast?
0
Power Supply for xl6001 12V Switching LED Driver
0
Which is more efficient: A much larger than needed step-down voltage converter, or one rated closer to the actual load?