I'm working with a circuit that should control the intensity of several LEDs using the CTL and REF pins on a buckpuck driver part number 3021-D-E-1000. I'm using an AD5204 digipot configured as a rheostat between the CTL and REF pins on the buckpuck to modulate the current seen at the CTL terminal, which in turn modulates the current the buckpuck sends to the LED (the higher the current seen at CTL, the lower the LED output). I'm using an Arduino to control the AD5204. The complete circuit I'm investigating is pictured below: 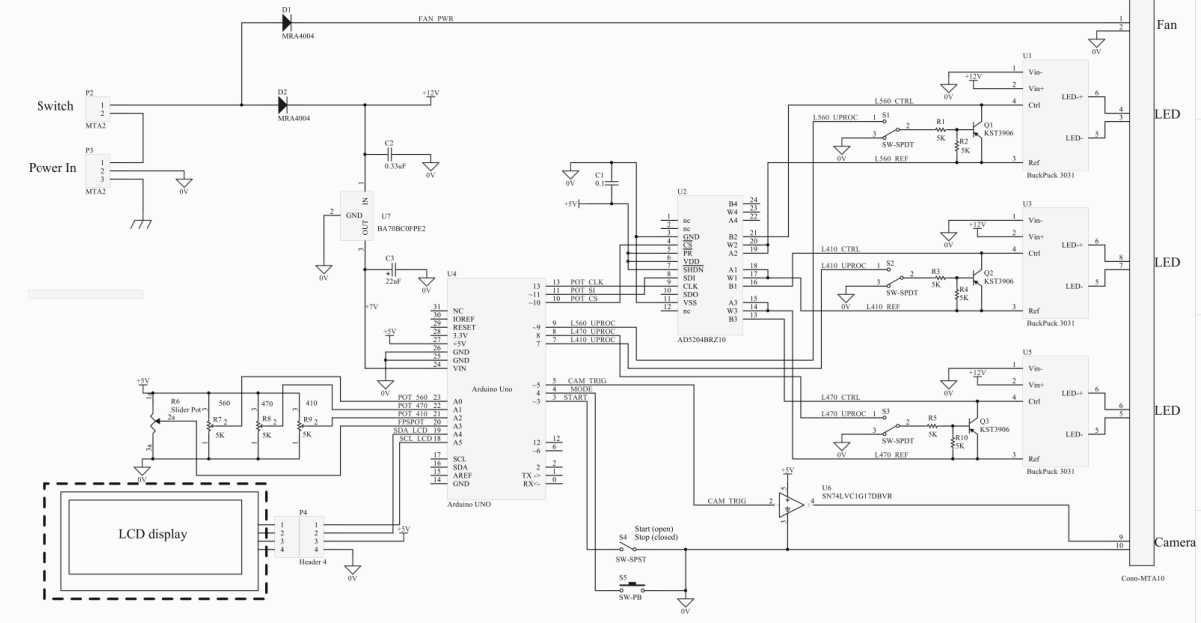 I believe the pertinent part of the circuit is: 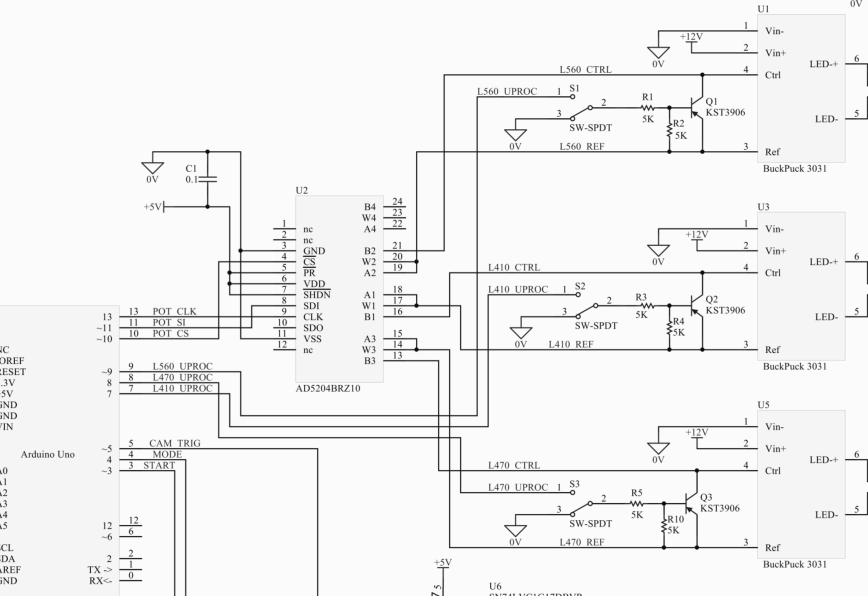 I can't get the LEDs to turn on. The switches (SW-SPDT) and the BJTs (Q1-3) are both used as on/off for the LEDs, while the digipot is supposed to control the intensity of the LED output.

My initial thought was that I wasn't communicating properly with the digipot, but I've confirmed with a logic analyzer that I am sending the correct SPI commands to the AD5204. This is the code I'm using (the Arduino 7,8, and 9 pins are written high to put the BJTs in cutoff, and the mechanical switches are connected to the Arduino pin, not to GND, so theoretically the current at CTL should be dictating the LED output):

So I'm beginning to doubt that communication with the AD5204 is the problem, but that leaves me pretty lost. I'm not sure why the LEDs aren't turning on, especially since even if I weren't communicating with the AD5204, by default all pot values should be set to midrange (5kOhm).

At that point the LEDs should be on, as far as I understand. Is there something I'm overlooking in the rest of the circuit?

I've tried to be thorough with the information I've provided, but sorry in advance if I've left things out, and I'll try to add information as soon as possible if I have.

(1) I don't seem to be changing the wiper value on the digipot--it remains at the default value of 5kOhm no matter what value I try to write to it. So that's one problem I need to figure out.

(2) At the same time, when the rheometer has a value of 5kOhm, the LED should be on. I've confirmed this on a breadboard with the same buckpuck I'm using on the PCB and a mechanical rotary pot--at 5kOhm the voltage at the CTL terminal is ~1.23 V, and the LED is at its brightest.

(3) On the PCB with the full circuit as pictured previously, I'm getting 4.3V at the CTL terminal for each RDAC on the 5204, which doesn't accord with (2).

The first thing to do is make sure your digipots are communicating and switching correctly. Get out a mulit meter and put it across the W and B terminals and see if you see a change in resistance. If you don't then you have a pot issue (or the transistor is turning on unintentionally and shorting out the resistance of the rheostat). Another possibility is the CTRL pin on the buckpuck is shorting things out (you never know).

Test each part of the system separately, find a potentiometer and connect it to the buck puck without the transistor or rheostat connected (or grab an extra one of the bench) to make sure you have the right buckpuck, only the E and I versions have a 5V regulator, if it doesn't have this the rheostat or transistor won't work and you will need to provide a 'pull up' voltage for the ctrl pin.

I'll place my bets that you don't have the right buckpuck, if I read the datasheet right, only the 3021-D-I-xxxx will work in your application.

By the way, if you have a 50k or 100kΩ part, you could exceed the current rating as the buckpuck can source 5mA and the 50k and 100k parts can only tolerate 5mA so if the resistance goes low enough you could burn the digipot out the lowest resistance is 45 ohms which is over 100mA which will burn the part out.

For example, when VA = 0 V and Terminal B is tied to Wiper W, the output resistance values outlined in Table 8 are set for the RDAC latch codes.

This also means that If you have terminal A connected to W the resistance will be backwards (the table is for B to wiper W, so the \$ R_{WB}\$ values will be reversed from \$ R_{WA}\$

So when your design powers up, you default to 84Ω or 45Ω (depending on your part) and more than likely burn up the AD5204. You need to have series resistance to protect the AD5204

From the Absolute maximum ratings section:

I would expect the external resistance is the high side of a voltage divider.

My troubleshooting procedure would be:

At the same time, when the rheometer has a value of 5kOhm, the LED should be on. I've confirmed this on a breadboard with the same buckpuck I'm using on the PCB and a mechanical rotary pot--at 5kOhm the voltage at the CTL terminal is ~1.23 V, and the LED is at its brightest.

The LEDs should be at their brightest when there is no connection between CTL and REF.

I would use fixed resistors to trouble shoot rather than a pot. 5K, 2.5K, and 10Ω. Once the LEDs are working properly with the resistors then I would connect the AN5204.

I would definitely take the transistors out of the equation until after the AN5204 is working.

You should not need a resistor between the AN5204 and the Buckpuck to limit the current to 11 mA depending on the voltage of the CTL pin with a 10Ω resistor connected between REF and CTL. As the pot resistance decreases the voltage at the CTL pin should increase from ≈1V @ 5K, to about 4V @ 0Ω. See Fig. 3.

On the PCB with the full circuit as pictured previously, I'm getting 4.3V at the CTL terminal for each RDAC on the 5204, which doesn't accord with (2).

A voltage of 4.3V on the CTL means the resistance between CTL and REF is low and the LEDs should be be very dim or off.

1.23V at the CTL pin means the resistance is fairly high and the LEDs are at maximum intensity. 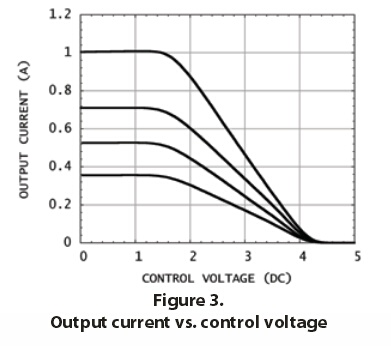 Not the answer you're looking for? Browse other questions tagged led-driver digital-potentiometer or ask your own question.

2
Why is the efficiency of this LED driver circuit so low?
1
Dimming multiple LED panels without PWM to LEDs; modified DMX control or something else?
3
Driving a 12v LED, substituting a PWM chip for a linear regulator?
3
Driver selection for high power LEDs
0
Digipot for 0-9v control
2
LED brightness stability issues - how to fix?
1
SPI LED driver with radically different brightnesses PCA9745B
1
Turning led strip on with car battery power
0
Night LED Lamp with PIR Sensor - Guide to calculation parameters