Why is neutral wire connected to ground at the transformer?

I understand the use of ground wire at the home appliances but why is the neutral wire connected to ground at the transformer? Why doesn't the neutral wire go back to the power generation plants.

I found this image online. 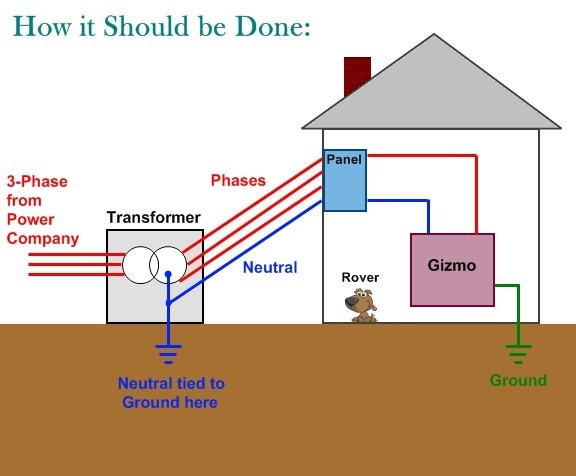 I understand the use of ground wire at the home appliances but ...

The earthing / grounding of applicances helps in two ways:

... why is the neutral wire connected to ground at the transformer?

Connecting to ground at the transformer (or at the incoming connection point, depending on local regulations) ties the return conductor to ground and effectively "neutralises" it. Because it presents a low risk of significant voltage on it the neutral lines are normally unfused.

Why doesn't the neutral wire go back to the power generation plants.

The diagram you provided hints at this.

I didn't understand the part about low impedance return path in the first part ...

Imagine that we have the option of earthing the neutral locally or back at the power station. The short local cable might have a resistance of, say, 0.05 Ω to earth while the much longer cable back to the substation might be, say, 10 Ω. Now create an earth fault by touching a live wire to the metal case of an appliance. Let's say that 10 A flows to earth. What voltage will the case rise to?

The local neutral-earth link is safer.

... and the neutralising part of the 2nd highlight.

So in order to minimize the potential of the appliance case in case of faults we need to choose the low impedance return path.

'return' - does it mean that the ground wire actually is a part of a loop (as if connect to the power station at some point).

No, that's not quite the right way to think about it. There is normally no potential on the chassis or case of the appliance. They are not conductors. But you are correct that it prevents the chassis / case from achieving a high voltage.

So only a conductor which is always at a potential can be neutralised?

That doesn't make sense. If it's always at a potential then it can't be neutralised. Only if the supply would otherwise be floating can one of the conductors be neutralised. Let's look at a very simple example.

Figure 1. (a) A floating battery. (b) An earthed battery.

In (a) the battery is floating. There is no ground connection unless there is a fault and one of the wires touches something earthed. Then the other-wire becomes live.

In (b) the battery negative has been connected to earth. It is grounded or neutralised and the other wire is 9 V with respect to earth.

One of the advantages of neutralising is that no fuses are required in the neutral line as there is no significant voltage with respect to earth.

It's grounded in order to complete the circuit. If it weren't grounded and the customer didn't ground their neutral bar or tie the earth bar to it, then there would be no way for earth current to get back to the transformer (except through a neighbour's earth, which isn't ideal). The customer would then have a floating ground assuming no neighbour earths exist, and if they touched a neutral wire, they'd complete the circuit between the floating ground and neutral, causing a shock. Usually the ground is floating because it's disconnected from the earth pin itself where it's assumed there is always another one in the earth back to neutral, so that when you touch the ground, you get a shock.

Not the answer you're looking for? Browse other questions tagged transformer mains grounding neutral or ask your own question.

1
What are the benefits of earthing?
4
Why should the protective angle on high voltage lines be kept as small as possible?
3
What are the adavantages of neutral vs. isolated grounding?
1
How does the power station compensates for the current that flows down to earth due to domestic body-current faults?

0
How much ground current vs. neutral wire current?
38
Why don't we use neutral wire for to ground devices and earth wire for closing the circuit?
0
Step down transformer voltage between neutral and ground
1
Question on Ground/Neutral connection for a 220V equipment
2
Why short circuit occur when the hot line touches the neutral wire (aka ground)?
0
Does connecting neutral to chassis (bootleg ground) rise chassis potential to main's voltage with respect to ground?
10
Why is the fuse connected to the live wire?