I have a project where I need to have audio input into atmega168PA. I've decided to implement it by using an electret microphone which will feed into op amplifier for low-pass filtering and amplification. 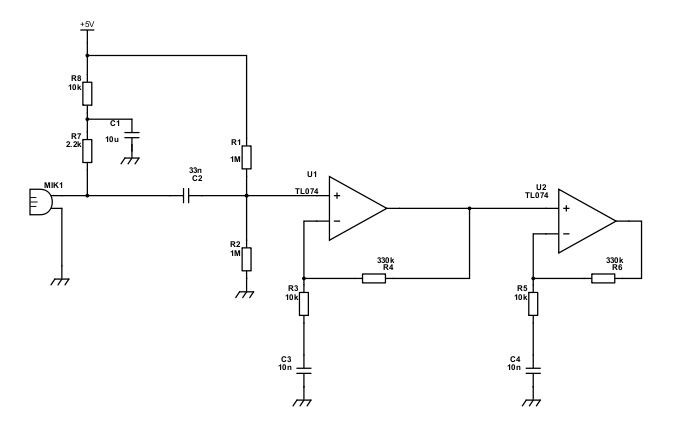 Design is not mine, I found it from another thread.

Total gain of the circuit should be around 900 and output should be nicely centered around 2.5VDC. Problem is that measuring with an oscilloscope I see that it doesn't give nearly enough amplification. By tapping pretty strongly on the mic I get only about 500-600mV (shown below) of peak-to-peak amplitude around 2.5V. With a loud clap I get little more than volt. Not nearly enough to register normal voice.

I understand that microphones need a lot of amplification so I added another stage (shown below) with amplification gain of 15 which should have produced gain more than 15000 in total, but still the peak-to-peak amplitude was little under a volt.

So, what am I doing wrong? I used TL074ACN op amps and I also tried LM324N op amp, but the results where same. Is it possible that neither of those amps are suitable for this application?

I also tried a simple circuit (shown below) with a transistor 2N3904 with schematic found from some other thread, which produced very good results allthough as I didn't have correct bias the signal was very distorted. But peak-to-peak amplitude was okay (around 3.6V). 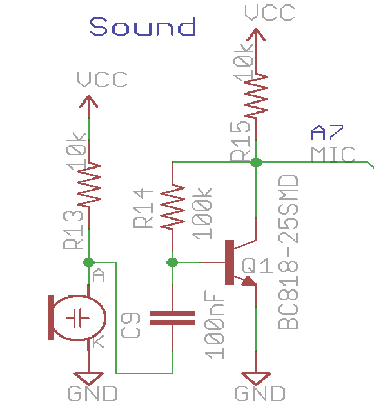 As I said I want to actually feed the output into ADC so I've designed a Sallen-key low-pass filter with cut-off frequency around 5kHz and verified that it works (I'm going to use the same one for DAC output). So my final schematic should look something like this:

Can someone point out whats wrong with my circuit or how to troubleshoot the problem? Or should I just go with transistor for amplification?

It turned out that the guy at my electronics store had supplied me with wrong value resistors so that's the reason it didn't work. Got it to work now, allthough it will still need some fine tuning and adding the filtering part. Below are pics of amplified signals

Not the answer you're looking for? Browse other questions tagged transistors amplifier avr filter low-pass or ask your own question.

12
How to make a clean amplified microphone analog to digital conversion?