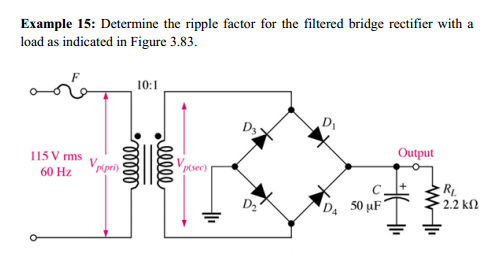 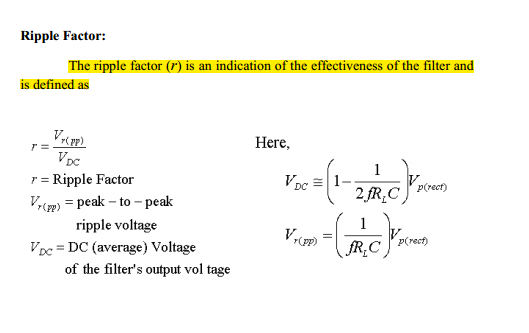 For the pictures above, I am confused as how to how they got/derived the formulas for the peak to peak ripple voltage (VrPP) and Vdc. So far, I got the output voltage, which is 14.9 volts. However, I am also confused with that VrPP and Vdc mean as well.

Another question: How exactly do the ripples occur, and what would happen if there wasn't the resistor (RL), or a resistor when there's a capacitor?

Ripples occur because the input is alternating current. 60 times per second the voltage goes from zero to maximum (~1.414 * 115 VRMS, because RMS is sort of an average, rather than the peak, ~163 V), then back to zero and then to -163 V (below zero). The full wave bridge rectifier "flips" the negative portion over to positive, but the input now is going from 0 to peak voltage on each half cycle, 120 time per second.

The job of the capacitor is to store some electricity from the peaks to fill in the gaps where the voltage falls below that peak. With no load at all, i.e. no resistor, the capacitor would charge to the peak voltage and stay there with no ripple. Because the resistor bleeds out some charge, the voltage drops a bit between peaks, as the graph shows, and then the charge is replaced when the input goes up again.

Put simply, a larger capacitor can store more electricity to better fill the gaps. A smaller resistor allows more charge to flow, so the voltage drops more from the peak value.

If your teacher has mentioned it, include in your calculation that there's a voltage drop inside each leg of the rectifier, about 0.6 V for each if "ordinary" silicon (Si) diodes are used (as opposed to Ge, SiC, CuO, Schottky Si, etc.). Since there are two in series in each direction, that's an additional drop of ~1.2 V below the peak output of the transformer.

The rising part of ripple is the sine source voltage pumping as much current as the transformer , diode and Cap total ESR will conduct so that the falling slope of ripple discharges the cap according to some RC =T decay slope (63% drop at t=T). If however T is much greater than 1/2f the period due the double frequency full wave rectifier then the Vpp is a fraction of the exponential decay.

This becomes more linear as the time constant is increased and ripple down slope is smaller and more linear but also means the duty cycle and discharge/ peak charge increases with this small voltage ripple ratio.

My rule of thumb is RC=8/f for 10% V ripple using f as the double line rate. This contradicts the erroneous formula you provide for Vpp.

At the output of the rectifier you have a capacitor and a load. The capacitor provides current to the load for about 1/2 the period of the input wave.

So the current through the load is (provided by the capacitor):

If you assume that the ripple is small then the current through the load is nearly constant. That is:

Here, \$dv\$ is the ripple voltage and \$dt\$ is the time the capacitor has to provide current to the load, which is half the period for a full wave rectifier

You could write it in terms of the frequency instead of the period: 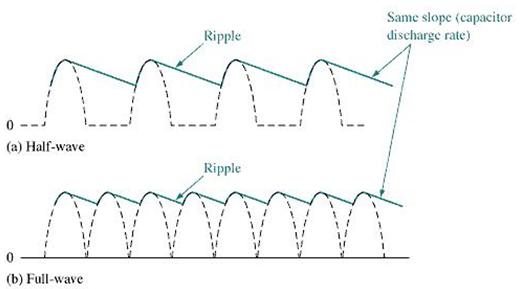 I know you've selected an answer already. But I thought I'd add a more detailed (and exaggerated) picture of the behavior that captures all of what's happening. It may supplement this answer with added information that someone else may appreciate. 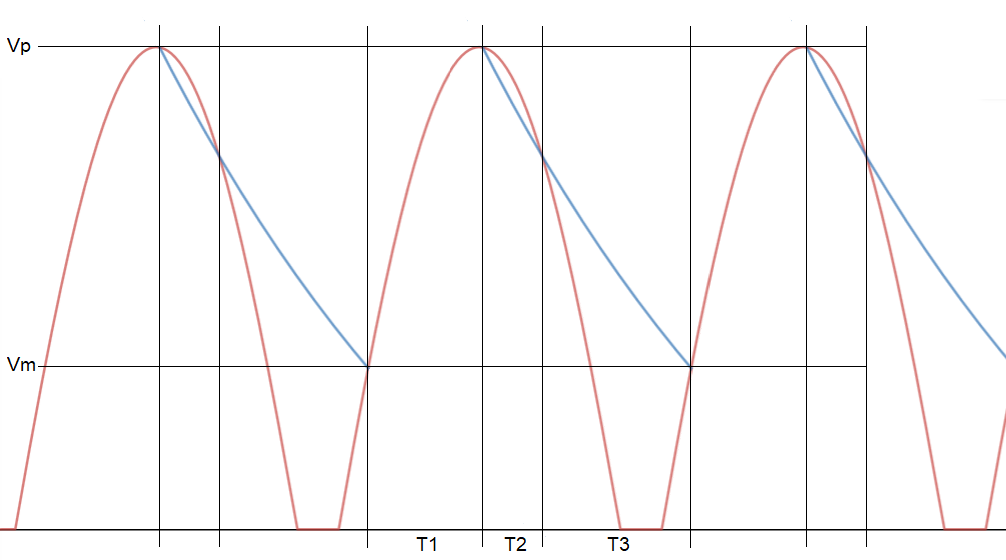 There are three time periods indicated on the diagram and two curves.

The orange curve is what's left of the original sine wave after the bridge rectifier diodes have had their voltage-dropping impact. If you look closely at the orange curve, you will see a short period of time where the value is zero and the sine/cosine shape isn't present, anymore. This is during a short time when the diodes are effectively off (or in the process of turning off.)

So, the orange curve is what you'd observe across your load resistor if there was no capacitor present.

The blue curve shows you what the RC decay curve might look like (the actual curve, with respect to the orange curve, depends on the values of R and C and also the AC frequency.)

A load resistor will draw a gradually declining current from the capacitor, when the blue curve is above the orange curve. The capacitor supplies the load current when the sinusoidal transformer voltage, less the diode drops, is below the capacitor's voltage because the diodes are reverse-biased then and no longer support any of the load current.

If the resistor weren't present, this is the condition of "no load." What happens then is that the blue line stays flat and sits on the horizontal line labeled \$V_p\$ on the chart. In short, it rises to the peak voltage and just stays there (ignoring capacitor leakage current.)

Keep in mind that I've exaggerated the decay curve (it usually isn't allowed to dive down as deeply as I've allowed in the graph) because I want to also highlight what's happening in period \$T_2\$, which is a period that is all too rarely shown in graphs you will more easily find on the web. The period \$T_2\$ is usually less than 1% of the total period and most people reasonably choose to simply ignore it. (A mathematician would not ignore it. They would, instead, study it!)

The equations you were given are approximate ones. More exact equations can be derived, but the resulting equations would require complex mathematics as they involve solutions containing sine/cosine functions and exponential decay functions. Full solutions for \$T_1\$, \$T_2\$, and \$T_3\$ involve the LambertW function and require applying techniques such as cylindrical decomposition, Cauchy's bound, Richardson's lemma and the Sturm-Richardson method.

These have only recently been developed and published for applications in astrophysics, molecular physics, and condensed matter physics. It's ironic that such a simple combination of electronic parts might require modern developments in mathematics to solve completely. But it does.

Unless you ask for it, I'll avoid adding that mathematical development (I just performed that task last night when going to sleep -- it was definitely a joy for me.) You should instead just accept the approximations you have. They are good enough for most practical purposes.

Not the answer you're looking for? Browse other questions tagged circuit-analysis diodes power-electronics rectifier bridge or ask your own question.