Are there any single supply OP amps with negative supply voltage?

I learned that basically the only difference between a "single supply" OP amp and a dual supply one is that the former can drive much closer to the negative supply rail.

Furthermore if I understand correctly, if you enable a "single supply" OP amp to drive closer to the positive supply rail too, then it becomes a rail-to-rail OP amp.

Then my question, which I believe is something not unnatural to come up with at this point, is that there can be "negative single supply" OP amps which drives close to the positive supply rail but not negative.

Has there been any such product, at present or in the past? Or is it meaningless to develop such a product (e.g. it costs more than an rail-to-rail device so it makes no sense.)?

It may be a stupid question but I will be glad if you could share me your knowledge.

EDIT: I am sorry that I must have clarified that I am not asking about how to handle negative input with generic OP amps but about some existence (or possible application) of a weird device easily imagined to be validly designed.

Such device would be advantageous over rail-to-rail OP amps if it could be sold cheaper and the users are sure that they are never operating near the negative supply.

This is analogous to "positive single-supply OP amps" which are preferred because of lower cost when the users are sure they are never operating near the positive supply rail.

I understand there is very little demand for such a product because the range of application is limited, but I kept wondering because I have seen far weirder devices.

I apologize for the lack of explanation in the original post.

The term 'single supply op-amp' is rather outdated now.

In the bad old days, op-amps had both an input range (common mode voltage, or VCM) and an output range that stopped a volt or three short of both rails. As many applications required operation around ground, they had to have both positive and negative rails.

Now, there are many amplifiers built with an input range that includes both rails, and whose output range goes very close to the rails, at least at low current. These are full rail-to-rail, or R2R amplifiers. If you want to use them directly with signals around ground, you still need a positive and a negative rail.

For AC application like audio, you can AC couple, so the circuit inputs and outputs can be around ground, but the amplifier works correctly within its rails, whatever they are.

Amplifiers like the popular LM324 have a VCM and an output that includes the negative rail, so can be used in this way. When people design such circuits to interface with logic, or car electrics, they tend to think in the few positive volts above ground, and not worry too much that they can't get a full positive output, or that the VCM stops 2v short of the positive rail.

This is the 'single supply op-amp'. Connect the negative rail to ground. Use it near ground, as long as the signal is still strictly positive. Don't go negative. Don't use it near the positive rail, but you didn't want to do that anyway!

To operate either side of ground, use positive and negative supplies.

To operate close to ground but never below, use an amplifier whose VCM and output includes the negative rail, which you ground.

To operate close to both rails, use a full R2R amplifier, whether the negative rail is grounded, or sent to a more negative supply.

It isn't needed, if an op amp is in the inverting configuration signals beyond the rails can be used. Take for example this circuit: 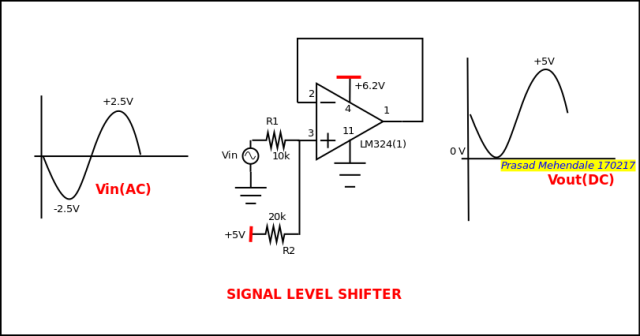 A negative voltage can be shifted up with a single supply op amp. They also have 'beyond the rails' op amps that extend slightly ( ~300mV ) beyond the rails to allow for a slightly larger range, of course the output limit still applies.

An important aspect of the input range including ground/vcc, was that some input stages, suffer inversion when one of the inputs goes beyond the rails/rated range. So instead of signal merely being clipped and distorted, it tries to shoot down the other way.

Obviously this is far worse for this signal distortion, and much worse for a comparator where the result becomes completely wrong.

Amplifiers with rail-to-rail input work to near or beyond the positive rail.

Some specialized high-side current sense chips have an amplifier that has inputs that function near the positive rail.

There are some inexpensive JFET-input amplifiers that will typically work to the positive rail at room temperature, but it is not guaranteed.

Not the answer you're looking for? Browse other questions tagged operational-amplifier negative-voltage rail-to-rail or ask your own question.

6
Single supply op-amps in series
2
Single Supply Op Amp Bypass Caps
3
Is there any disadvantage to running an op-amp off asymmetrical voltage rails?
1
Non ideal behavior from single-supply rrio op amps
5
Bypassing single supply op amps biased at mid-supply
0
Dual-supply op-amp LDO does not work, but single-supply does
1
Single supply inverting op amp: output not as expected
2
What OP AMP spec should I be checking to assure this behavior
0
What will happen if I feed a UA741 op-amp lower negative supply voltage than recommended?